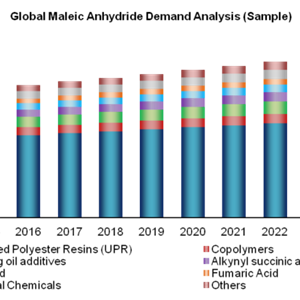 Maleic Anhydride market is colourless or white solid with acrid odour. Most important application of Maleic Anhydride is to produce unsaturated polyester resins. The demand for maleic anhydride is generally dependent on overall state of the economy as it is bulk commodity chemical dependent on general economic trends. North America and Europe has seen a modest growth in past few years. China s maleic anhydride demand grew rapidly in past decade and now it is experiencing slow growth on account of steady polyester demand. South East Asia and Middle Eastern regions are predicted to witness a strong growth on account of its high GDP growth rates. Maleic anhydride is used in applications such as unsaturated polyester resins (UPR), copolymers, lubricating oil additives, alkynyl succinic anhydrides, maleic acid, fumaric acid, agricultural chemicals and others.

Global MAN market is estimated to grow at CAGR of 3% in the long-term forecast. In most regions of the world, the largest market for maleic anhydride is unsaturated polyester resins which are again dependent on the growth in the construction industry and overall state of the economy. The other industries that impact the overall demand of MAN include automotive and marine industries.

According to Prismane Consulting Herfindahl Herschmann index (HHI) calculation, the market appears to be highly concentrated as the leading producer Huntsman accounts for less than 10% of the global capacity market. The market is also highly fragmented owing to the numerous players in the Asia- Pacific region specially China which has a number of players with relatively smaller capacities. MAN demand from new and emerging applications is expected to grow at a higher rate due to the lower base effect.

The report provides answers to the following key questions: