In the Phase III CASPIAN trial Imfinzi at a fixed, convenient dose improved

survival with either a cisplatin or carboplatin chemotherapy backbone

Imfinzi in combination with four cycles of standard-of-care (SoC) chemotherapy (etoposide with either cisplatin or carboplatin) demonstrated a statistically-significant and clinically-meaningful improvement in OS vs. SoC consisting of up to six cycles of chemotherapy and optional prophylactic cranial irradiation (PCI).

The results were presented at the Presidential Symposium of the IASLC 2019 World Conference on Lung Cancer hosted by the International Association for the Study of Lung Cancer in Barcelona, Spain.

José Baselga, Executive Vice President, Oncology R&D said: “We are encouraged to see more than a third of small cell lung cancer patients treated with Imfinzi plus chemotherapy alive at the 18-month landmark, which is remarkable given the aggressive nature of the disease. It is also noteworthy that these results may enable physicians to choose Imfinzi in combination with either cisplatin or carboplatin chemotherapy backbones. We look forward to working with regulatory authorities to bring Imfinzi to patients with small cell lung cancer around the world as soon as possible.”

Luis Paz-Ares, MD, Ph.D., Chair, Medical Oncology Department, Hospital Universitario Doce de Octubre, Madrid, Spain and principal investigator in the Phase III CASPIAN trial said: “Patients have had limited treatment options for small cell lung cancer, a devastating disease where the five-year survival rate has been as low as 6%. The significant survival benefit demonstrated with Imfinzi combined with only four cycles of a choice of chemotherapy compared to a robust control arm, provides evidence and hope of a new treatment option for these patients.”

SCLC is an aggressive, fast-growing cancer that recurs and progresses rapidly despite initial response to platinum-based chemotherapy.1 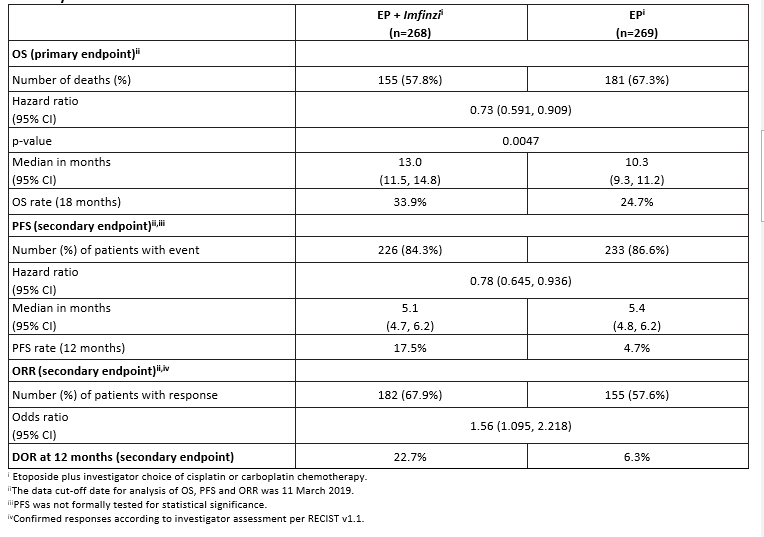 The safety and tolerability of Imfinzi in combination with SoC etoposide and platinum-based chemotherapy was consistent with previous trials. Results showed that 61.5% of patients experienced a Grade 3 or 4 AE with Imfinzi plus SoC (all causes) vs. 62.4% with SoC, and patients discontinuing treatment due to AEs were similar between arms (9.4% vs. 9.4%).

Imfinzi is approved in the curative-intent setting of unresectable, Stage III non-small cell lung cancer after chemoradiotherapy in 49 countries, including the US, Japan and across the EU, based on the Phase III PACIFIC trial.

The trial is being conducted in more than 200 centres across 22 countries, including in the US, Europe, South America, Asia and the Middle East. The primary endpoint is OS.

Lung cancer is the leading cause of cancer death among both men and women and accounts for about one-fifth of all cancer deaths.2 Lung cancer is broadly split into NSCLC and SCLC, with about 15% classified as SCLC.3 About three quarters of SCLC patients are diagnosed with extensive-stage disease, in which the cancer has spread widely through the lung or to other parts of the body. Prognosis is particularly poor, as only 6% of all SCLC patients will be alive five years after diagnosis.4

Imfinzi (durvalumab) is a human monoclonal antibody that binds to PD-L1 and blocks the interaction of PD-L1 with PD-1 and CD80, countering the tumour's immune-evading tactics and releasing the inhibition of immune responses.

Imfinzi is also approved for previously-treated patients with advanced bladder cancer in 10 countries, including the US.

As part of a broad development programme, Imfinzi is also being tested as a monotherapy and in combination with tremelimumab, an anti-CTLA4 monoclonal antibody and potential new medicine, as a treatment for patients with NSCLC, small cell lung cancer, bladder cancer, head and neck cancer, liver cancer, cervical cancer, biliary tract cancer and other solid tumours.

About AstraZeneca in lung cancer

AstraZeneca has a comprehensive portfolio of approved and potential new medicines in late-stage clinical development for the treatment of different forms of lung cancer spanning several stages of disease, lines of therapy and modes of action. We aim to address the unmet needs of patients with EGFR-mutated tumours as a genetic driver of disease, which occur in 10-15% of NSCLC patients in the US and EU and 30-40% of NSCLC patients in Asia, with our approved medicines Iressa (gefitinib) and Tagrisso (osimertinib), and ongoing Phase III trials ADAURA, LAURA, FLAURA and FLAURA2 as well as the Phase II combination trials SAVANNAH and ORCHARD.5-7

Our extensive late-stage Immuno-Oncology programme focuses on lung cancer patients without a targetable genetic mutation which represents approximately three-quarters of all patients with lung cancer.8 Imfinzi (durvalumab), an anti-PDL1 antibody, is in development for patients with advanced disease (Phase III trials POSEIDON, PEARL, and CASPIAN) and for patients in earlier stages of disease including potentially-curative settings (Phase III trials AEGEAN, PACIFIC-2, ADRIATIC, ADJUVANT BR.31, PACIFIC-4, and PACIFIC-5) both as monotherapy and in combination with tremelimumab and/or chemotherapy.

About AstraZeneca’s approach to Immuno-Oncology (IO)

IO is a therapeutic approach designed to stimulate the body’s immune system to attack tumours. Our IO portfolio is anchored by immunotherapies that have been designed to overcome anti-tumour immune suppression. We believe that IO-based therapies offer the potential for life-changing cancer treatments for the clear majority of patients.

We are pursuing a comprehensive clinical-trial programme that includes Imfinzi (anti-PDL1) as monotherapy and in combination with tremelimumab (anti-CTLA4) in multiple tumour types, stages of disease, and lines of therapy, using the PD-L1 biomarker as a decision-making tool to define the best potential treatment path for a patient. In addition, the ability to combine our IO portfolio with radiation, chemotherapy, small targeted molecules from across our Oncology pipeline, and from our research partners, may provide new treatment options across a broad range of tumours.

About AstraZeneca in oncology

AstraZeneca has a deep-rooted heritage in oncology and offers a quickly-growing portfolio of new medicines that has the potential to transform patients’ lives and the Company’s future. With at least six new medicines to be launched between 2014 and 2020, and a broad pipeline of small molecules and biologics in development, the Company is committed to advance oncology as a key growth driver for AstraZeneca focused on lung, ovarian, breast and blood cancers. In addition to AstraZeneca’s main capabilities, the Company is actively pursuing innovative partnerships and investments that accelerate the delivery of our strategy, as illustrated by the investment in Acerta Pharma in haematology.

AstraZeneca is a global, science-led biopharmaceutical company that focuses on the discovery, development and commercialisation of prescription medicines, primarily for the treatment of diseases in three therapy areas - Oncology, CVRM and Respiratory. AstraZeneca operates in over 100 countries and its innovative medicines are used by millions of patients worldwide. For more information, please visit astrazeneca.com and follow us on Twitter @AstraZeneca.