Thursday 26 September. London, UK - A chatbot therapist to treat depression has launched as recent figures show that NHS patients seeking help with their mental health are waiting more than eight weeks to see a doctor after their first appointment.1 The chatbot therapist was developed by medical device company Flow, which in June launched a brain stimulation headset treatment for depression, the first and only medically approved at-home treatment of its kind in the UK and EU.

"I feel like I have a buddy who’s just chatting with me, no judgement, and forcing me to pace myself."

Available to download free on iOS, the chatbot therapist is based on the latest psychology and neuroscience research, and was developed by clinical psychologists and machine learning experts. An Android version will be available in October 2019.

Nearly one in four adults in the UK are affected by a mental illness.2 Suicide is the most common cause of death for men aged 20-49 years in England and Wales.3 The economic costs of mental illness in England is estimated at £105.2 billion annually.4 And one in three work sickness notes handed out by GPs are for mental health reasons, including depression.5

“Accessibility and early intervention in depression is crucial,” says Daniel Mansson, Clinical Psychologist, CEO and Co-Founder of Flow. “The ‘always-on’ source of therapy provided by Flow ensures people get the help they need as quickly as possible. Flow can provide anonymity without the fear of being judged by others. This is great as some people feel anxious when it comes to talking about their depression to another human.”

To maximise the chance of recovery, Flow can be used in conjunction with the Flow brain stimulation headset. Randomised controlled trials published in the New England Journal of Medicine and the British Journal of Psychiatry show that brain stimulation, of the type used in the Flow headset, had a similar impact to antidepressants but with fewer and less-severe side effects.6,7,8 The Flow headset retails at £399 and can be purchased here.

Flow joins a growing number of mental health chatbots, including Woebot and Wysa, which are playing an increasing role in the mental health landscape. Whilst Woebot and Wysa use a cognitive behavioural approach to change the way people think, Flow has one goal: to reduce clinical depression based on well-grounded science.

Flow is starting talks with the NHS to have its brain stimulation headset available on prescription. The company recently announced an investment of £1.2 million by Khosla Ventures to roll out its offering across Europe, introduce the Flow headset to healthcare clinics in the UK, and fund clinical studies. 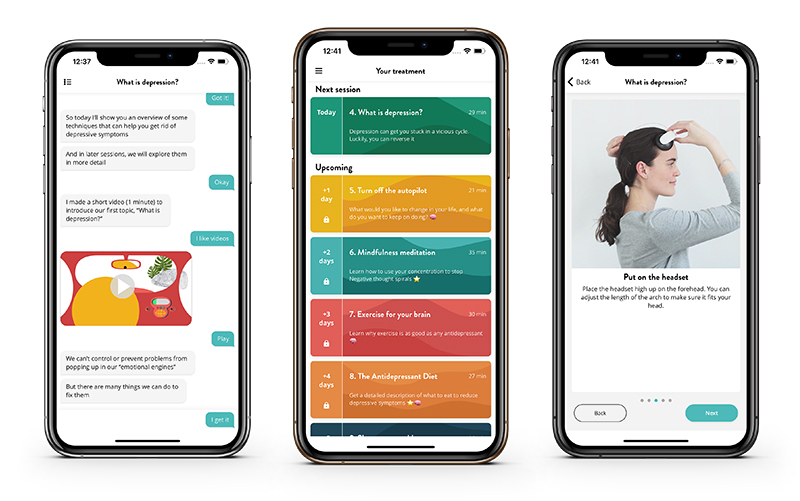 Daniel Mansson, Clinical Psychologist, CEO and Co-Founder of Flow, and is available for interview

The Flow chatbot therapist requires iOS 11.0 or later. Compatible with iPhone, iPad and iPod touch. Users must be at least 17 years old to download this application.

Flow is a physical and behavioural at-home treatment for depression which comprises a brain stimulation headset and therapy app. It is the first and only medically approved treatment for depression of its kind in Europe. Classified as a Class IIa medical device, Flow was developed from the fields of clinical psychology, neuroscience and innovative technology including machine learning. Flow empowers and motivates individuals to take control and self-manage their depression with effective, non-pharmacological, digital alternatives. Based in Malmo, Sweden, Flow was founded in 2016 by clinical psychologist Daniel Mansson and neuroscientist Erik Rehn. Their team consists of prominent researchers in the field of psychiatry and brain stimulation.

3Office for National Statistics (2015). Suicides in the United Kingdom http://www.ons.gov.uk/ons/rel/subnational-health4/suicides-in-the-united...

4Department of Health: No health without mental health