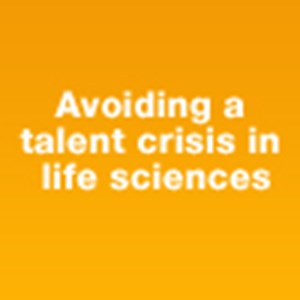 With increasing competition in the emerging world, healthcare reforms, rising customer expectations, cost constraints and the on-going challenge of successfully bringing new drugs to market, it’s perhaps fair to say that the life sciences sector is under pressure. It may not surprise most of those in the industry, then, to hear that the industry is also potentially facing a talent crisis.
In a recent PwC Global CEO survey, a worrying 51% of CEOs from the industry reported it is becoming more difficult to attract and hire the right people – the highest recorded percentage of the sectors polled. So what is happening in the industry and why is the sector in flux?At Ochre House we recently held a think tank with senior HRD’s within pharma and life sciences to identify the people challenges they face and how these can be addressed. In a benchmarking survey for this we were able to drill down into just what the key talent challenges are. The results concluded that:

In practice, most respondents found themselves bogged down in reactive recruitment, or as one neatly put it, “fighting fires.”It would appear that there is a level of disconnect between line managers and resourcing teams when it comes to identifying the critical skills needed for the future, particularly on an international level. And, perhaps most important of all, while there was enthusiasm for pipelining talent in the sector which would create engagement with potential hires at the very early stages of their careers or even education, many of resourcing teams are finding it difficult to make a sufficiently strong business case for such activity.There consequently seemed to be a talent ‘wish list’ shared by the great majority of senior HR professionals consulted, which embraced the following:But how can any or all of this be achieved? Discussion among the delegates at the think tank itself centred around three key solutions:

While it may sound simple, there are many instances whereby identifying critical skills needs to be done as a first point of call. A relatively small number of participants had undertaken what they felt was a robust analysis of likely future skills gaps, but this had almost exclusively been limited to high potential and business leader level. This had, in turn, led to some mapping of the external talent pool and an examination of where the next generation of replacements would come from.

On the back of this a debate broke out as to whether organisations in the sector were focusing too heavily on ‘emerging talent’ in its widest sense and neglecting the ongoing potential of individuals at the later stages of their careers. While at least one delegate maintained that ‘new blood’ was vital to fuel innovation, others felt that a mix of the old and new in a mentoring/developmental environment might be the most productive solution. In particular one person made the point that we need to raise awareness of the industry beyond the mainstream vocations; doctors, nurses and vets, so school children could make informed decisions when making career choices. Some also argued that the industry was limiting itself by relying too heavily on traditional hires and that there was a need to foster much greater diversity by bringing in people from ‘creative’ as well as hard scientific backgrounds.

While there was an overall positive feeling, at least about the theory of talent pooling and pipelining, there was doubt around how possible it was to put into action with several examples of failure outside the sector cited. For pooling and pipelining to work, engagement must be ongoing and, perhaps most important of all, relevant. Going much further than simple job postings or bland news about a company, really effective engagement will require an approach based upon the principles of marketing. This will certainly need the ongoing involvement of line managers willing to share their knowledge, insight and experience. And engagement will need to commence much earlier than is common at present. One delegate gave the example of Microsoft, which encourages its top development people to lecture at universities in order to raise awareness of opportunities in its industry as a whole, but also as a way of accessing high potential students before their career plans are crystallised. Consider O2 as well which has a team of ‘professional engagers’ focused on target talent groups such as female engineers, but backed up by a cadre of front-line managers who have bought into the concept.

Perhaps the greatest consensus was around the belief that pipelining and pooling could only be effectively implemented if a clear and compelling business case could be built for it. Delegates pointed out that, in general, organisations were focused on the ‘here and now’ in terms of talent. However, when asked to think about the future many businesses are relying on currently relevant technical abilities as opposed to the underlying capabilities that would help to create a workforce which could adapt to the ever-increasing pace of change. As a result there was a general unwillingness to invest in any process whose deliverables were perceived as tenuous and only arriving at some ill-defined point in the future. However this did not mean that resourcing teams could simply go off and build a strategy and then foist it on the business. Constant engagement and questioning of what the business actually wanted to achieve and how it planned to do it was essential to create a blended and integrated solution.

There was general agreement that pipelining and pooling needs to be championed by an organisation’s leaders and that the best way to achieve this would be through ‘starting small’, through contained and highly focused test projects. And any such project would need to demonstrate its ROI clearly, through agreed metrics and, wherever possible, a clear link to the ‘bottom line’.

While the sector is perhaps a way off a talent crisis for the time being, organisations need to be addressing this issue before it’s too late. Talent pooling and engaging with future candidates provides a sustainable solution which is beneficial to an organisation long term. Without a succinct solution, businesses and indeed the sector face losing out when it comes to talent.