Engineered bacteria can be used as anticancer agents, in which suitable bacterial strains are engineered to colonize hypoxic tumor environments and provide therapeutic payloads. The hypoxic microenvironment changes tumor cell metabolism and leads to cell quiescence, which contributes to tumor cell resistance to therapy. Live bacteria can inherently colonize areas of hypoxic tumors. In tumor-bearing mice, the intravenously injected bacteria were initially delivered nonpreferentially to healthy and tumor tissues. Over time, the nontumor tissues and circulating bacteria were rapidly cleared, whereas the tumor bacteria were able to multiply due to the lack of immune surveillance. Wild-type active strains of Streptococcus pyogenes were first used to treat cancer in 1891, and subsequent reports have shown that many bacterial strains of the genera Bifidobacterium, Clostridium, Escherichia, Listeria, and Salmonella preferentially colonize solid tumors. Facultative or obligate anaerobes are more specific for tumors and do not colonize non-neoplastic hypoxic lesions. Interestingly, bacterial spores from sprouted Clostridium have also been reported to target solid tumors. Therefore, such bacteria are considered to be ideal candidate delivery vehicles for targeting tumor cells. 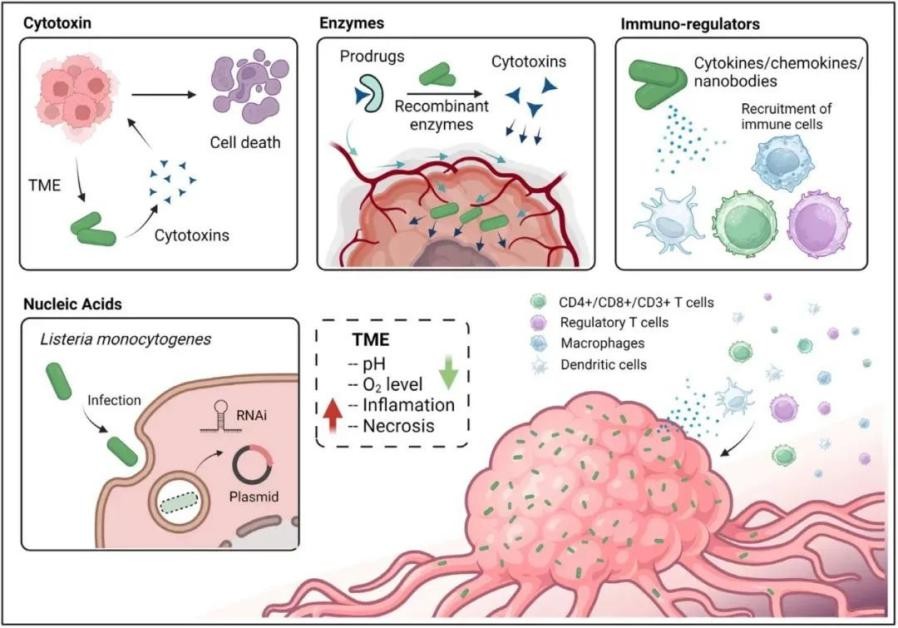 However, the safety and intrinsic toxicity of tumor-targeting bacteria remain a concern, as the bacteria reach the tumor site after systemic administration. Therefore, anaerobic bacteria are often chosen as chassis bacteria in these engineered microbial systems because they do not colonize normal aerobic tissues. In addition, the virulence of the bacilli was reduced by genetic modification, and the corresponding synthetical characteristics to enhance the anticancer effect were integrated. These features include a variety of therapeutic payloads, such as chemically coated and loaded chemotherapy agents or nucleic acids and recombinant proteins. This tumor-specific delivery include 1) nucleic acids, including cDNAs encoding therapeutic proteins as DNA vaccines and silenced RNA for RNA interference and 2) recombinant protein payloads, including cytotoxic agents, prodrug convertases, immunomodulators, and angiogenesis inhibitors.

Naked nucleic acids such as therapeutic cDNA and silent RNA have limited permeability across tumor cell membranes, so cell absorption is poor, and direct delivery efficiency is very low. To enhance nucleic acid internalization, a variety of delivery vectors have been explored in gene therapy. One way to do this is to use live bacteria as carriers to transfer bacterial plasmid DNA into mammalian cells, a process called bacterial transfection. In cancer therapy, bacterial transfection can be performed in two ways: 1) delivering cDNA encoding therapeutic proteins to tumor cells to actively induce cell death; 2) Delivering cDNA encoding tumor-associated antigen to antigen-presenting cells to stimulate the anti-tumor immune response. In both applications, target host cells need to internalize carrier bacteria, which either actively invade cancer cells or are passively taken up by immune cells. Salmonella and Listeria monocytogenes are best suited for bacterial infections and have been commonly used in cancer treatment.

In bacteria-mediated cancer therapy, therapeutic proteins expressed and delivered by bacteria directly targeting tumors are mainly divided into cytotoxic agents and immunomodulators. The expression of cytotoxic agents is the most direct way for bacteria to exhibit high antitumor activity. To reduce possible harm to healthy tissues, the expression of cytotoxins needs to be tightly controlled to induce production under tumor-specific conditions. In addition to controlled expression, cytotoxins can also be delivered as tumor-targeted chimeric proteins. It has been reported that an engineered Salmonella typhimurium expressing chimeric Pseudomonas exotoxin A with EGFR-targeting ligand achieved targeted killing of tumor cells in vitro.

In addition to being able to directly interfere with tumor payloads, tumor-targeting bacteria have also been designed to express and deliver prodrug convertases. As the bacteria localize, harmless prodrugs are administered throughout the body and converted to their original cytotoxic form by bacteria colonizing the tumor, thereby minimizing the off-target activity of the original drug. Cytosine deaminase (CD) is an in-use prodrug convertase that converts 5-flucytosine (5-FC, prodrug) into the chemotherapy drug 5-fluorouracil (5-FU, original drug).