Development of Anti Influenza Drugs: Currently Approved And Under Development

Here let's dig in the structure of influenza virus and anti influenza drugs approved and under development.

Influenza viruses are segmented, single-stranded, negative-sense RNA viruses of the Orthomyxoviridae family. Viral particles are usually spherical, with a diameter of 80-120 nm, but there are also filamentous ones that are a few microns long. Influenza viruses are composed of three main parts (Figure 1), namely the core, matrix protein, and viral envelope. 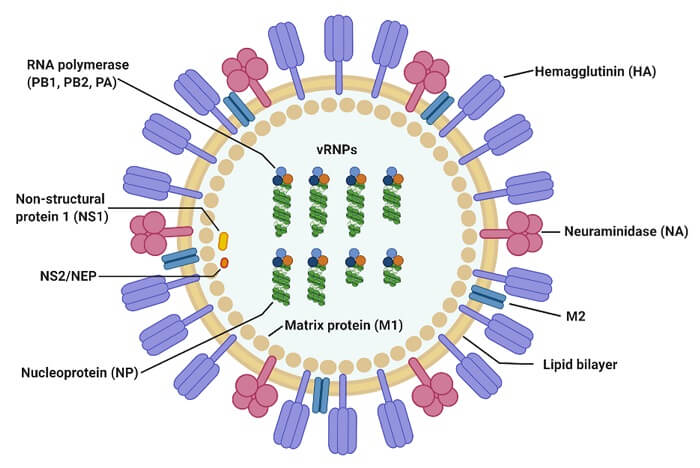 In view of the great threat of influenza, the development of antiviral drugs against influenza has been a hot research topic. As mentioned above, there are currently 9 drugs in 5 categories of anti-influenza drugs approved for using.

Structure-based drug designs such as the neuraminidase inhibitors oseltamivir and peramivir have achieved great success. However, with the mutation of influenza viruses, the existing anti-influenza drugs are facing severe resistance problems. Currently, alkylamines are not recommended by WHO for the clinical treatment of seasonal influenza due to the emergence of widespread M2 ion channel resistance sites in seasonal influenza. Oseltamivir resistance sites were also found in the 2009 pandemic influenza isolates and the 2013 H7N9 avian influenza isolates, making the resistance of this class of drugs a concern.

Oseltamivir, developed by Roche, was first approved for marketing by the Swiss Regulatory Authority in 1999, and subsequently by the FDA in the US, followed by the Pharmaceutical and Medical Devices Agency (PMDA) in Japan in 2000, and in China in 2001. Oseltamivir inhibits influenza neuraminidase, thereby blocking the release of offspring virus particles. It is indicated for the treatment of acute, uncomplicated illness due to influenza infection in patients 2 weeks of age and older who have been symptomatic for no more than 2 days and for the prophylaxis of influenza in people over 1 year of age. From 1999 to 2017, oseltamivir generated at least $15 billion in revenue for Roche, with sales of exceeding $3 billion in 2009, the year of the H1N1 virus pandemic.

Arbidol is a non-nucleoside antiviral drug that can block the replication of influenza virus by activating 2,5-oligoadenylate synthetase, which specifically prevents the contact, adhesion and fusion of influenza virus capsule membrane with host cell membrane, and can penetrate into the nucleus to directly inhibit the synthesis of viral RNA. On the other hand, it has immunomodulatory, interference-inducing and antioxidant properties, induces interferon production in host cells and stimulates humoral response and phagocytosis of macrophages, causing cellular and humoral immunity, and its antiviral effect is closely related to improving immune function. Arbidol is mainly used for treatment and prophylaxis in children >2 years old and adults, and is only approved for marketing in Russia and China.

The mechanism of action of favipiravir, a nucleoside antiviral drug, has not been fully elucidated. Its target of action is the viral RNA-dependent RNA polymerase. After oral administration, the drug is converted into biologically active riboside triphosphate derivative of favipiravir with a structure similar to that of purines, which can compete with purines for viral RNA polymerase; the riboside triphosphate derivative of favipiravir can also insert into the viral RNA strand and induce lethal mutations in the virus.  Thus, mechanistically, favipiravir has potential antiviral effects against various RNA viruses. Favipiravir is active against both influenza A and B viruses and is used to treat adult patients with novel and recurrent influenza.

In a phase II clinical trial of favipiravir, Fuji Chemicals Japan studied patients with influenza A and B. The results found a statistically significant improvement in patient after treatment with favipiravir compared to the placebo group. A total of 640 subjects were enrolled in the international multicenter phase III clinical trial with adult influenza A and B patients as study subjects. Using oseltamivir as a control, the favipiravir and oseltamivir groups showed similar antiviral efficacy.

Baloxavir Marboxil is a drug with a novel anti-influenza mechanism of action, which inhibits viral replication mainly by inhibiting the cap-dependent endonuclease enzyme in the influenza virus, an enzyme that is essential for the replication of the influenza virus. The greatest advantage of this drug over other anti-influenza drugs is that it requires only one oral dose, avoiding the problem of viral resistance due to incomplete treatment courses.

Baloxavir marboxil is expected to replace oseltamivir as the best-selling anti-influenza drug, with global sales reaching $173 million in 2019. There is only one small molecule inhibitor of PA in clinical development worldwide, TG-1000 by TaiGen Biotechnology, which is currently in clinical phase I development. In addition, China's GP681 from GINKGO PHARMA is currently under clinical application.

According to the Integrity database, the drugs currently in development for influenza are shown in Table 2.

FLU-IGIV, developed by Emergent BioSolutions, is a hyperimmune intravenous immunoglobulin consisting of polyclonal antibodies obtained from human plasma for the prophylaxis and treatment of influenza virus infections, including seasonal influenza A, and is currently in phase III clinical study phase.

DAS181 (fludase) is a host-targeted recombinant sialidase fusion protein with good inhibitory effects against a variety of IAV strains. It works by removing sialic acid from the surface of respiratory epithelial cells to prevent the attachment of influenza viruses and is currently in phase II clinical trials for influenza treatment.

ZSP-1273 was developed by Raynovent Biotech and  WuXi AppTec. In April 2018, the Chinese Food and Drug Administration accepted the clinical trial application (chemical drug class 1) for this product and received the clinical trial approval in August 2018. As the first influenza A virus RNA polymerase inhibitor approved for clinical trials in China, ZSP1273 has high target selectivity and strong in vitro activity, and is effective against many different subtypes of influenza virus strains, including human H7N9 avian influenza, as well as different subtypes of oseltamivir-resistant strains, and its in vitro anti-influenza virus activity is about 1000 times more than that of oseltamivir. ZSP1273 is effective in animal models for both prophylactic administration in vivo and therapeutic administration beyond 48 hours, and has high safety and outstanding potential for clinical application.  The results of the phase I clinical trial showed that ZSP1273 was safe, well tolerated, and had ideal pharmacokinetic characteristics.

Verdinexo r(KPT-335), developed by Karyopharm Therapeutics, is a novel, oral Selective Inhibitor of Nuclear Export (SINE) compound currently in clinical phase I for the treatment of influenza.

Since the H1N1 Spanish influenza pandemic in 1918, the control of influenza has been greatly improved, and among them, influenza vaccines have made a great contribution in responding to seasonal influenza epidemics. However, the susceptibility of influenza viruses to antigenic drift and antigenic shift, and the mismatch between pandemic and vaccine strains have posed new challenges for vaccine development. Today, influenza viruses are still seasonally prevalent in the population, and highly pathogenic avian influenza H5N1 and H7N9 viruses remain a zoonotic threat, but there are very limited "weapons" available to combat them. In recent years, nine anti-influenza drugs have been approved worldwide, but the widespread use of anti-influenza viral drugs has led to increasing resistance to influenza viruses. The PA inhibitor Baloxavir marboxil, which was launched in Japan in 2018, has the greatest advantage over other anti-influenza drugs in that it requires only one oral dose, largely avoiding the problem of virus resistance due to incomplete treatment. It is expected that more anti-influenza drugs with different mechanisms will come to the market in the future.