Drawbacks of the thiol-maleimide reaction

Since Bachem was founded, leadership in the technology and innovation sphere has been the foundation of the business’ success. In order to continually produce high-quality products, taking advantage of new and emerging technologies is key. This is why Bachem is constantly investing in research to inform and refine their manufacturing processes. This has led to their development of highly optimized tools for one of the key methods for covalent modification of peptides and proteins: the thiol-maleimide reaction.
Editor: Chloe Chamberlain Last Updated: 31-Mar-2022

Since Bachem was founded, leadership in the technology and innovation sphere has been the foundation of the business’ success. In order to continually produce high-quality products, taking advantage of new and emerging technologies is key.

This is why Bachem is constantly investing in research to inform and refine their manufacturing processes. This has led to their development of highly optimized tools for one of the key methods for covalent modification of peptides and proteins: the thiol-maleimide reaction.

This reaction does, however, cause side-reactions, which can present a challenge. It has often been overlooked in scientific literature concerning peptides, but during the conjugation of N-terminal cysteine peptides to maleimides, thiazine formation is a significant by-product.

Thiazine: the product of a side-reaction with unprotected N-terminal cysteine

The thiol conjugation which occurs during the thiol-maleimide reaction is used to add chemical labels, such as fluorescent dyes, PEG, radiolabels and small molecules, to biomolecules. The process has clear advantages, particularly the speed of the reaction between the maleimides and thiols, and a preferential chemical reaction in an environment with a neutral pH. On the other hand, there are also the downsides associated with the side-reactions, including thiazine rearrangement, which may be a result of the joined maleimide-cysteine.

In Bachem’s study of thiazine rearrangement, published in the Journal of Peptide Science, they show that the formation of the thiazine impurity (scheme 1) is an impediment to the purification, characterization and storage of peptide conjugates. It is vital to understand this side-reaction as it can lead to loss of product, so their study focused on investigating the process and developing tools to prevent it. When there is the conjugation of a maleimide with an unprotected N-terminal cysteine amino acid, the side-reaction causes the formation of a thiazine derivative. 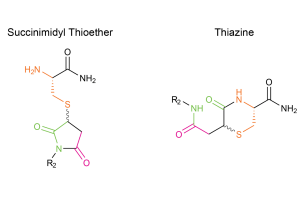 When a succinimide results from the conjugation of peptides to maleimides via an N-terminal, it is vulnerable to nucleophilic attack from the N-terminal amine of the cysteine, at either of the carbonyls shown at position 1 or 3 in scheme 2. Through a fused bicyclic tetrahedral intermediate, trancyclization can occur, allowing a six-membered thiazine product to form. 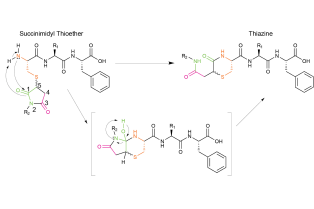 Scheme 3 - Mechanism of thiazine formation: thiazine is formed after nucleophilic attack of N-terminal amine at the carbonyl of the succinimide leading to the intermediate product. Then a transcyclization occurs to give a six-membered ring product.

Following the nucleophilic attack of the N-terminal amine at the carbonyl of the succinimide leads to the thiazine side-reaction and the intermediate product. The six-membered ring product is formed due to the transcyclization.

When studying how generalizable this reaction would be, Bachem investigated the sequence and pH dependence of the succinimidyl thioether to thiazine side-reaction using a tripeptide model system.

The research showed a similar pattern to other work in regard to the rapid acceleration of the rate at which thiazine forms at a basic pH, suggesting that basic conditions promote this rearrangement. When pH is higher, the corresponding increase in the rate of thiazine formation fits with the idea of a base-dependent mechanism involving the N-terminal amine’s nucleophilic attack of the succinimide.

The research confirmed the generation of thiazine when a range of different analytical methods were used. Bachem exchanged the amino acid adjacent to the N-terminal cysteine for various other amino acids, and noted that the formation of the thiazine impurity occurred, albeit at different rates, for all of the tripeptides which we investigated. They expected that when a maleimide linker was used this would be more stable. However, it still caused substantial thiazine formation, providing further indications that the side-reaction is a general one.

Furthermore, Bachem were able to show that the nucleophilic reaction, and thus the generation of thiazine impurities, could be prevented by the protonation of the N-terminal amino group in acidic conditions. Carrying out the conjugation in an acidic environment around pH 5 halts the formation of thiazine. However, this means that to ensure succinimidyl thiother is not lost, the peptide conjugate must also be purified, stored and applied under acidic conditions. As an alternative, the thiazine impurities can be prevented through acetylation of the N-terminal cysteine. Since the thiazine side reaction is a general one, Bachem recommends not using N-terminal cysteine in peptide conjugates when the succinimide thioether linkage is required.

“Understanding the side-reactions in peptide chemistry is of utmost importance for peptide API production. By conducting this study, we think we were providing to our customers and to the peptide community at large an important insight that will help save development resources. This is why we conducted this study and are very satisfied with these results.”

For those who work with peptides, peptide-dyes, conjugates and peptide-payload conjugates, or who are involved in the production of peptide active pharmaceutical ingredients (APIs) which are used in life-changing drugs, the results of this research are hugely important.