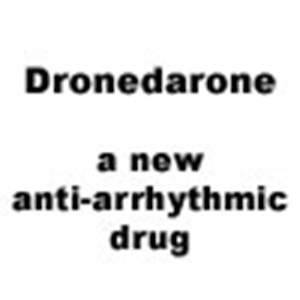 “Effective new treatments for AF are urgently needed,” commented Professor Peter Kowey of Jefferson Medical College, Philadelphia. “The condition is sweeping through the population of ageing baby-boomers in developed countries, increasing the incidence of stroke five-fold.”  AF affects 2.5 million people in the US alone. In the UK the condition affects 1 in 25 adults over age 60 and 1 in 10 of the over 80s. It is estimated that uncontrolled AF accounts for between 15 and 20 per cent of all strokes. By reducing the heart’s pumping ability, AF also predisposes patients over time to develop heart failure.

Dronedarone is a structurally modified version of amiodarone, currently the acknowledged gold standard anti-arrhythmic, and has been designed to match amiodarone’s efficacy whilst offering a much improved safety profile.  Dronedarone contains no iodine radical whilst this makes up over a third of amiodarone’s molecular structure.  Amiodarone is associated with significant thyroid problems and with cumulative, potentially fatal, lung and liver toxicity. To date, dronedarone’s adverse event profile appears comparable to placebo.   In pivotal trials it showed no evidence of generating pro-arrhythmia (tachy- or bradyarrythmia), no episodes of torsade de pointes and no signs of amiodarone-related organ toxicity affecting thyroid, liver or lungs.

At the AHA meeting in Dallas, researchers showed the versatility of the drug’s effect; the lowered risk of first recurrence was consistent across three patient subgroups.  A highly significant 25 per cent (p<0.0001) risk reduction for first recurrence was seen in patients previously treated with amiodarone, in patients with structural heart disease and among those with a recent need for cardioversion therapy.  “In each subgroup, dronedarone was consistently and uniformly more effective than placebo,” said lead ADONIS investigator Professor Bramah Singh of UCLA Medical School.

A further study presented at AHA by Professor Stefan Hohnlose from Goethe University, Frankfurt showed dronedarone significantly reduced all-cause hospitalisations or deaths by 27 per cent compared to placebo in patients with paroxysmal and persistent AF.

“Dronedarone was able to maintain a consistent sinus rhythm in patients with AF,” commented Professor Hohnlose, lead investigator of the EURIDIS study.  “The potential clinical benefits of dronedarone may provide an important new treatment approach for AF.”  A large prospective study ATHENA which will enrol 37,000 subjects is currently assessing morbidity and mortality outcomes of AF patients treated with the drug.

Drugs with a class III mechanism of action are seen as the most promising area of research for improved pharmacotherapy of AF, with several new agents in addition to dronedarone in development.

Dronedarone was filed with the US FDA and the European Regulatory Authority, EMEA, in June 2005.