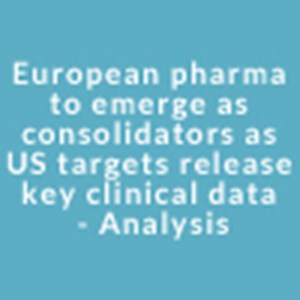 European pharmaceutical firms looking to add to their portfolios could take advantage of a slew of US assets releasing late-stage clinical data and a calmer cross-border M&A market due to a possible clampdown on US tax inversion deals, bankers and analysts said.

UK-based AstraZeneca [LON:AZN] and GlaxoSmithKline [LON:GSK], which have spent the first half of the year reorganising their portfolios, could now look to the US in an effort to replenish and enhance existing pipelines, the bankers and analysts said.

Roche [VTX:ROG] and Sanofi [EPA:SAN], which are both on the hunt for acquisitions, could also be sounding out targets across the Atlantic to add advanced technologies and new orphan drug development science, one banker and analyst suggested.

US firms in the USD 5bn-USD 10bn size range would be affordable and provide European bidders with long-term revenues, two bankers and two analysts said. They named InterMune [NASDAQ:ITMN], BioMarin [NASDAQ:BMRN], Incyte Corporation [NASDAQ:INCY] and Pharmacyclics [NASDAQ:PCYC] as targets within this range.
Jazz Pharmaceuticals [NASDAQ:JAZZ] and Salix Pharmaceuticals [NASDAQ:SLXP], which are both UK-headquartered, also fall within this deal range, but European pharma would have to compete with US bidders willing to pay a tax inversion premium, one of the analysts said.

UK giants on the prowl

AstraZeneca and GSK, which have both undertaken strategies that have led them to focus on respiratory disorders, can better reap revenue if they have a presence across the gamut of respiratory indications, the analyst and banker said.

An acquisition of US-based InterMune, which has filed pirfenidone for idiopathic pulmonary fibrosis (IPF) for approval with the US FDA and is awaiting a response in 4Q14, would be a good fit for either AstraZeneca or GSK, they said.

GSK is developing a greater interest in the IPF space, a consulting physician said, while in May this year, AstraZeneca told this news service it was exploring more activity in IPF in its attempts to expand its respiratory portfolio.

There are not many firms specifically looking at IPF, so only players with an existing respiratory franchise would pay the price required to do a deal, the banker added. But, the asset would also interest players in inflammatory and orphan diseases, meaning that there would be many firms actively looking at InterMune, a second banker said.
Adding a premium, InterMune could fetch USD 5bn with a potential 10-15% upside if the US FDA approves the drug, pushing the price tag to up to USD 5.5bn - a deal that both GSK and AZ could comfortably afford, the analyst and banker said. With only one product in the late-stage pipeline, one would assume USD 1.5bn-USD 2bn peak sales are needed for InterMune to reach a value of USD 4bn-USD 5bn for a sale, an industry M&A lawyer said.

Bidders have so far refrained from moving in on InterMune, given the regulatory risk associated with pirfenidone's FDA approval quest. But, now that it has been approved in the EU and Canada, buyers are more willing to acquire, the third healthcare banker said.

US regulatory risks have been minimised with recent positive Phase III data presented at the American Thoracic Society (ATS) in May, physicians told this news service. The potential for pirfenidone to be studied in other fibrotic diseases in the lung or other organs are a long way from materialising, the consulting physician said. While GSK and AstraZeneca could find this potential an added bonus, such a possibility would not be compelling enough for non-respiratory focused pharma players, the analyst and banker agreed.

Furthermore, pirfenidone is unlikely to become a blockbuster that justifies its value with only one drug and preclinical candidates years away from success, an IPF physician said. Analyst forecasts of pirfenidone sales have varied from USD 600m to more than USD 1bn.

Intermune’s attraction would be to gain an established IPF sales force and revenue in Europe with the expectation of a US launch in 1H15, the physician said.
Competition from Boehringer Ingelheim’s IPF drug nintedanib, which saw positive Phase III results presented at ATS in May, could also dampen pirfenidone’s market uptake, according to a previous Biopharm Insight report. Boehringer’s existing powerful global respiratory sales force will be hard to compete with, the M&A lawyer added. As both drugs have similar mechanisms of action, uptake will be dependent on marketing execution, said a second consulting physician.

The attractive risk of new science

Roche - which recently snapped up Danish gene silencing company Santaris Pharma for USD 450m - and Sanofi - whose notable acquisition of Genzyme gave it a considerable presence in rare diseases, could both see BioMarin a potential target, one of the bankers and analysts said.

While BioMarin has “interesting science,” any predator would be buying into the company’s future potential, the analyst said. Additionally, Sanofi may be entertaining various options but might not have the appetite for any substantial M&A deals until 2016, the M&A lawyer said.

BioMarin's pipeline readouts are scheduled for June 2015. Its PARP inhibitor (BMN-673) for genetically defined cancers is likely to be an attractive proposition for Roche, the banker suggested. Roche has paid down its Genentech acquisition debt, which will allow it to finance its thirst for technology-driven acquisitions, he added.

Oncology products and companion diagnostics - as would be the case if Roche acquired Pharmacyclics to marry up the Gazyva (obinutuzumab) drug to its diagnostic - remains a core expertise and acquisitive interest for the Swiss giant, one of the bankers said.

Sanofi and Roche could not immediately be reached for comment.

by Mintoi Chessa-Florea, Surani Fernando and Eunice Ng in London