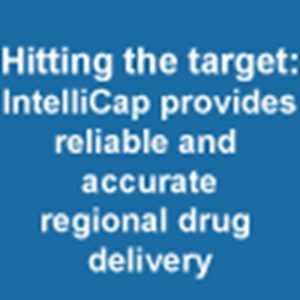 Medimetrics, recently certified to ISO 13485, has successfully developed the IntelliCap system, specifically designed to target delivery of small molecule drugs and biologics to the GI tract. The technology is capable of achieving controlled release of drugs to specific GI sites in a fast, cost-effective and convenient manner (Shimizu et al., 2008).
Last Updated: 01-May-2012

Medimetrics, recently certified to ISO 13485, has successfully developed the IntelliCap system, specifically designed to target delivery of small molecule drugs and biologics to the GI tract. The technology is capable of achieving controlled release of drugs to specific GI sites in a fast, cost-effective and convenient manner (Shimizu et al., 2008). This electronic capsule has the added capability of measuring quantitative data such as temperature and pH throughout GI transit.

The idea of a swallowable device with sufficient electronic capability to deliver a drug in a programmed manner has turned from fiction to fact in recent years. There are various types of electronics-based capsules currently in development or in common use (Sharma, 2009).

This approach to drug delivery offers many exciting possibilities and, on the flip side, several challenges. It is tempting to utilise this technology for therapeutic purposes however, regulatory hurdles abound and significant patient education on the usage of the capsules is envisaged. It is believed that the ideal application of these electronic capsules is in the area of early stage drug development.

The drug development process is extremely high risk, commanding significant amounts of time, energy and cost. It is essential to be efficient and accurate in determining whether drug candidates should be moved ahead for further development or discarded from the development pipeline.

Early stage development, which includes pre-clinical and first-in-man clinical studies, is an extremely critical step in the overall development process as major go/no-go decisions need to be made. These key decisions require a significant amount of reliable data as major financial and human resource investments will be committed. Nevertheless, failures of drug candidates in the late stages are very common.

Clinical failures are usually a result of lack of efficacy, high toxicity, and unfavourable pharmacokinetic (PK) properties (Chaturvedi et al., 2001). These parameters are often poorly understood and difficult to predict. The oral route is by far the preferred method of drug delivery; hence it is critical to have a clear understanding of how a drug distributes and is absorbed following dispensing into the GI tract (Rosen and Abribat, 2005).

The value of a drug candidate is greatly enhanced if it shows propensity for being formulated into a controlled release dosage form, but investigating this characteristic is usually neglected during the development process (Thombre, 2005). The ability to accurately control the delivery of drug in the GI tract, to measure the GI transit parameters and to evaluate the environment in which drug is released will greatly enhance the value of PK studies.

The IntelliCap consists of a microprocessor, battery, pH sensor, temperature sensor, RF wireless transceiver, fluid pump, and drug reservoir (Figure 1). The capsule has two main subunits, the electronics body and the drug reservoir. This modular design ensures the drug comes into contact only with the reservoir, which is made from inert polymer materials. The drug payload can be in the form of a liquid solution, suspension, or gel.

The capsule communicates via a wireless transceiver to an external control unit worn by the test subject. This real-time wireless data recording, in addition to wireless remote control of dose delivery, enables researchers to monitor a capsule’s progress through the GI tract and direct the delivery profile ‘on the fly’.

The capsule measures pH and temperature every 10 seconds and reports the data immediately for display on a control station computer. The pH data is useful on two fronts. Firstly, it provides an indication of the pH environment in which the test drug is released. This information is valuable because the local pH can have a strong influence on the compound’s solubility.

These landmark pH shifts are used by the SmartPill system (SmartPill Corp., Buffalo, N.Y.) to measure and diagnose motility disorders (Rao et al., 2009; Kuo, 2008). In an IntelliCap study, these pH shifts can be used to determine capsule location in order to target drug delivery to a specific region and to better analyse PK data.

While the pH profile has been effectively used to determine regional location, there are some cases where finer detail on capsule location is required. For example, researchers interested in tracking the distribution of the drug after it is released from the capsule can do so by adding an imaging component to the study.

Gamma scintigraphy, a nuclear imaging technique, allows non-invasive in vivo imaging of gamma-emitting radioisotopes (Wilding et al., 2001). An example of using gamma scintigraphy to confirm the site and release of drug is shown in Figure 2. These scintigraphic images confirm that the drug reservoir is clearly intact in the stomach, and upon triggering drug release, the subsequent release of radiolabel in the transverse colon confirms the successful deposition of the drug at the target site.

Knowing the exact transit behaviour and pH environment of a delivery capsule in each subject is extremely valuable. The importance of understanding transit on an individual basis is illustrated by an example from an IntelliCap study in dogs (Becker et al., 2001).

In this study, the IntelliCap capsule delivered a test compound in a zero-order release profile for six hours. Of the four subjects studied, the gastric residence varied between 1 minute and 98 minutes. Average gastric residence time in dogs was found to be approximately 84 minutes (Sagawa et al., 2009).The subject with the anomalous gastric residence data (1 minute) had a PK profile which showed an instant rise in plasma drug concentration which then started to decay after 93 minutes. It was evident that data from this subject could not have been correctly interpreted without the accompanying transit data supplied by IntelliCap.

Merging the transit data with the plasma PK data allowed the portrayal of a consistent picture with regards to drug absorption. In each subject, the compound was poorly absorbed when released in the stomach or colon, and well absorbed when released throughout the small intestine. Plasma concentration rose rapidly as the drug was delivered in the small intestine and fell after the capsule reached the caecum. Results for a representative subject are shown in Figure 3.

Application of this newly developed electronic drug delivery capsule has been put to immediate use in the area of early stage drug development. With greater usage, many potential applications may be explored. Electronic control and incorporation of sensor or external data brings great promise for the development of personalised drug delivery.

About the Authors
Jeff Shimizu is a pioneer of the IntelliCap drug delivery system and co-founder of Medimetrics. He has more than 20 years of experience in systems research and development. Lee Ann Hodges oversees the management and operations of Bio-Images. She has been involved in the formulation, development, and clinical evaluation of oral dosage forms for the past 10 years.