Hospitality or Bribery? U.S. Pharma under the Spotlight 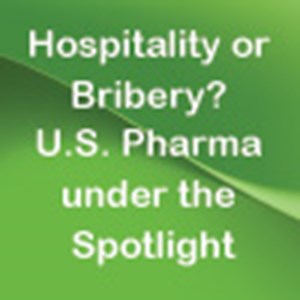 The real question of course, is where a reasonable level of corporate hospitality ends and bribery begins. In another case of big pharma under the spotlight, two of Britain’s biggest drugs companies, GlaxoSmithKline (GSK) and AstraZeneca, in addition to Bristol-Myers Squibb, Eli Lilly and Pfizer, are all under investigation by the U.S. Department of Justice for violation of the Foreign Corrupt Practices Act (FCPA) which prohibits U.S. firms from bribing foreign governments in attempts to win business. A GSK spokesperson acknowledged the first stage of the investigation last week, stating: "GSK confirms that investigations by the US Department of Justice and the Securities and Exchange Commission regarding the sales and marketing of pharmaceutical products outside of the USA have commenced". AstraZeneca also confirmed their early stage involvement in the investigations.

Paradoxically in this case though, while the FCPA forbids firms from engaging in such activities in foreign countries, no such law currently exists in the domestic United States to prevent a firm from wining and dining their clients. Yet with so many doctors in other countries operating under the auspices of government employment, an almost loop-hole like regulation could put some of big pharma’s biggest players under the kind of scrutiny that some critics have long argued for. A level of regulation and scrutiny that has now long existed in the UK. If found guilty, the companies in question could be liable for millions of dollars in fines.

Undoubtedly, at least part of the origins of this case relates to recent questions over the integrity of clinical trials conducted outside the United States. Specifically, recent reports have confirmed that a substantial amount of clinical trials for FDA-regulated products are being conducted in foreign countries. Furthermore, a recent paper by the Department of Health and Human Services found that up to 80 per cent of FDA-approved marketing applications had involved at least one trial in a foreign state. With this in mind then, investigators will be keen to look at how any payments to doctors conducting those trials could have influenced their results. Under the jurisdiction of the FCPA, said payments could have taken the form of anything from cash donations, to meals, to research grants.

Yet while the mere presence of the investigation will do little to improve the reputation of big pharma, if analysts’ initial reactions are anything to go by, the companies involved in this most recent of investigations may have relatively little to worry about – at least in terms of their bottom lines. Indeed, on the day that the investigation was announced, shares in GSK actually grew by 2.38%. Speaking to the Independent, Savvas Neophytou, an analyst for the investment bank Panmure Gordon, mirrored the reactions of the markets, asserting that: "Such investigations take years to complete and often result in fines or settlements that are designed to change behaviour rather than being obstructive to doing business".

That being the case, potentially the greatest consequence of this investigation - beyond its immediate ramifications - could end up being the effect that it has on domestic laws in the United States. For instance, if taking a doctor out to dinner is adjudged to amount to bribery outside the United States, then what argument is there to suggest that such payments should remain legal inside the U.S.? Right now it could be argued that there is a clear double-standard in operation. Depending on the outcome of this investigation, in the future big pharma may find itself governed by a much tighter standard of regulation, both inside and outside U.S. national borders.