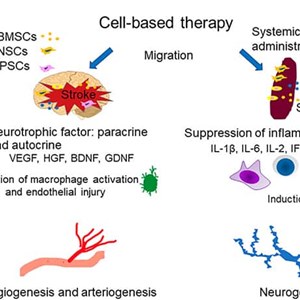 BM-MNCs, the heterogeneous cell mixture, are widely used in cell-based therapy and regenerative medicine, which can promote distinct angiogenic properties, mediate vascular repair, express several cytoprotective growth factors and cytokines and restore pathologically altered genes after ischemic injury. BM-MNCs can be prepared rapidly within a few hours and be collected autologously just prior to administration, which could be advantageous in acute clinical care settings, compared with other cell sources, such as stem cells requiring a period of cell culture before transplantation.
Editor: BANBAN LIU Last Updated: 27-Aug-2021

Cell therapy has been identified as an effective method to regenerate damaged tissue. Bone marrow-derived mononuclear cells (BM-MNCs) were first reported on a therapeutic angiogenesis for treatment of the ischemic heart in 2000. And the abundant reserve of BM-MNCs in the bone marrow (BM) can avoid the problem of in vitro cell expansion. Therefore, in the past decades bone marrow MNCs transplantation has been applied clinically for various ischemic diseases such as acute myocardial infarction, chronic ischemic cardiomyopathy and so on [1].

Bone marrow is a very heterogeneous compartment with multiple cell populations. The term BM-MNC is simply used to collectively denominate all cells present in BM whose nuclei are uninoculated or rounded and lack granules in the cytoplasm. These characteristics give the BM-MNCs a similar density and size, which is different from that of myeloid cells and red-cell progenitors, making them easy to separate by physical means. Among adult human bone marrow-derived mononuclear cells are hematopoietic progenitor cells at different stages of maturation as well as lymphoid cells (lymphocytes, plasmatic cells), monocytes, and macrophages. Furthermore, several cells of nonhematopoietic lineage, or which can differentiate into nonhematopoietic cells, have been identified in the mononuclear fraction of normal human adult BM. Among these are the side population cells, which present a phenotype and functionality characteristic of primitive stem cells having multipotent capacity; mesenchymal stromal cells; very small embryonic-like stem cells, which have characteristics similar to embryonic stem cells; multipotent adult progenitor cells; hemangioblasts (progenitor cells that are common for hematopoietic and vasculogenic lineages); endothelial progenitor cells (EPCs); and tissue-committed stem cells [2].

How to isolate BM-MNCs?

Briefly, in the Ficoll protocol (used in the REPAIR-AMI trial), bone marrow aspirates were diluted with 0.9% NaCl (1:5), were filtrated (100mm), and mononuclear cells were isolated by density gradient centrifugation using Ficoll (800 g, 20 min, without brake). Mononuclear cells were washed three times with 45 mL PBS (800 g), were counted, and used for the experiments or incubated overnight at room temperature in X-vivo10 medium containing 20% autologous serum.

In the Lymphoprep protocol, bone marrow was diluted with 0.9% NaCl (1:5), filtrated, and isolated by density gradient centrifugation using Lymphoprep (800 g, 20 min, without brake). Mononuclear cells were washed three times with 45 mL 0.9% NaCl containing 1% autologous heparin-plasma (250 g), counted, and used for the experiments or incubated at 48°C in 0.9% NaCl containing 20% autologous heparin-plasma and 50 IU heparin. An illustration of protocols is provided in Figure 1.

Figure 1. Isolation protocols at a glance. Bone marrow aspirates were divided and the same volume was used for isolation of BMNC according to the published Lymphoprep (ASTAMI) or Ficoll (REPAIR-AMI) study protocols [3].

Endothelial progenitor cells were analyzed by initially incubating samples with mouse serum IgG for 15 min at 4°C to block nonspecific binding/specific binding via FcR. Following this, cells were incubated for 15 min at 4°C with a cocktail of antibodies comprising allophycocyanin (APC)‑labeled antibody to CD133 and PE-labeled antibody to VEGFR‑2 to characterize EPCs and FITC-labeled monoclonal antibodies to CD2, CD13 and CD2 to identify and therefore eliminate inclusion of lineage-negative nonprogenitor cells. To ensure exclusion of nonviable cells in the final EPC count, cells were also incubated with a PerCPCy5- labeled 7AAD stain. Cells were then incubated for 15 min at room temperature with 2 ml of Pharm Lyse buffer to lyse RBCs. Samples were washed once in phosphate-buffered saline and 20 μl of AccuCount flow cytometry beads were added before analysis.

Total lymphocytes were identified by incubating for 15 min at room temperature with MultiTEST™, multiclonal, four-color direct immunofluorescence reagent containing anti-bodies CD45-PerCP/ CD16+CD56-PE/CD3-FITC/CD19-APC to identify lymphocytes and the major subsets of NK, T and B cells, respectively [4].

BM-MNCs as a source of stem cells are injected into the heart to treat AMI. The regenerative potential of adult autologous SCs after AMI was assessed for the first time in 2001 by a German group. They used unfractionated bone marrow mononuclear stem cells, which contained both hematopoietic and nonhematopoietic cells, a protocol that was extensively used subsequently. After selective catheterization of the infarct-related artery, the cell suspension has been intracoronary injected. Ten weeks later, the infarct area had been notably reduced (from 24.6% to 15.7%); in addition, cardiac function had improved by 20%-30%. Accordingly, the authors concluded that intracoronary administration of human autologous adult bone marrow mononuclear stem cells is feasibly in clinical settings and that it can promote myocardial regeneration after transmural infarction [6].

Increasing evidence shows that administration of bone marrow MNCs is a potential treatment for various ischemic diseases, such as ischemic stroke. Cell transplantation using BM-MNCs has been well-documented to accelerate angiogenesis/neovascularization in the several ischemic diseases. BM-MNCs contain endothelial progenitor cells (EPCs) that have been shown to contribute to revascularization of ischemic tissues and repair of injured endothelium. Furthermore, bone marrow MNCs may have an advantage because they contain several types of bone marrow cells, including hematopoietic stem cells and mesenchymal stem cells, which can produce large numbers of cytokines and trophic factors that promote central nervous system repair after stroke [7].

The experimental rationale for the use of bone marrow MNCs in stroke therapy includes a number of mechanisms of action, such as the modulation of local and systemic inflammation, promotion of angiogenesis and endogenous neurogenesis, differentiation into cell types that facilitate cellular repair processes, and secretion of neurotrophic factors from the acute phase to the chronic phase after stroke (Figure 2). The main mechanisms are considered to be angiogenesis and a reduction of endothelial damage [8].

BM-MNCs, the heterogeneous cell mixture, are widely used in cell-based therapy and regenerative medicine, which can promote distinct angiogenic properties, mediate vascular repair, express several cytoprotective growth factors and cytokines and restore pathologically altered genes after ischemic injury. BM-MNCs can be prepared rapidly within a few hours and be collected autologously just prior to administration, which could be advantageous in acute clinical care settings, compared with other cell sources, such as stem cells requiring a period of cell culture before transplantation.

Where to Get Human Bone Marrow Mononuclear Cells for research?

It is our pleasure to help relative researches to move forward. All the products of AcceGen are strictly comply with international standards. For more detailed information, please visit our product portfolio or contact inquiry@accegen.com.