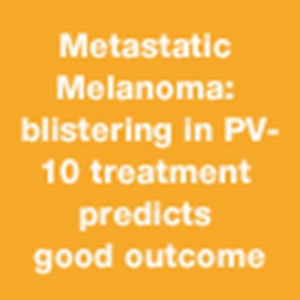 Injecting cutaneous lesions in Stage III-IV melanoma patients refractory to other treatments with PV-10 provides a viable strategy to maintain long-term locoregional control, concluded the final analysis of an open label single arm phase 2 trial presented at the 2013 European Cancer Congress, 27 September to 1 October, Amsterdam, The Netherlands. The study furthermore showed that both the number of lesions injected and presence of blistering was prognostic for outcome.

“The take home message is that if you have injectable tumours and inject them with PV-10 there’s a one in two chance that you will achieve a clinical response, and for these patients an additional one in two chance that a non injected (bystander) lesion will respond,” said Sanjiv Agarwala, the Principal Investigator of the study from St. Luke's Hospital Bethlehem, Pennsylvania.

PV-10, a 10% solution of Rose Bengal, has been developed to selectively target and destroy cancer cells without harming surrounding healthy tissue, minimizing the potential for systemic side effects. First used as a synthetic wool dye and later as an agent to stain necrotic tissue in the cornea, Rose Bengal was identified as a promising agent when screening different chemicals for photodynamic cancer therapy. Provectus Pharmaceuticals, Inc, (Knoxville, Tennessee, USA) discovered that PV-10, a formulation developed for administration directly into solid tumours, could destroy tumours without light activation. PV-10 is believed to work by accumulating selectively in the lysosomes of cancer cells, eliciting autolysis and triggering an immune response. In July a study published in PLoS ONE provided evidence in an animal model of melanoma that this effect is mediated through a T cell response.

Between October 2007 and May 2010, 80 patients with Stage IIIB-IV melanoma received up to four treatment cycles of intralesional (IL) PV-10, first at week 0 and if tumour remained at weeks 8, 12 and 16.Altogether up 20 lesions were treated, and up to two bystander lesions identified that underwent biopsy to confirm melanoma, but did not receive treatment.

The subjects, recruited from seven centres in Australia and the USA, all had locally advanced disease refractory to a median of six previous interventions. The primary endpoint was best overall response rate (BORR) judged by modified RECIST (mRECIST) in each subject’s target lesions. Subjects received a median of two treatment cycles, with 35% of patients having all their lesions injected.

Results showed that for all subjects, BORR was 51% (26% complete response, 25% partial response) with the amount of tumour burden accessible to PV-10 injection prognostic for outcome. Subjects who had uninjected bystander lesions achieved a BORR of 54% compared to 71% for subjects who had all their lesions injected.

An additional analysis was undertaken of response rates relative to locoregional blistering, a phenomenon affecting 40% of subjects which generally occurred within seven days of PV-10 injection, and typically resolved within four weeks. Results showed that BORR was 66% for subjects with blisters compared to 42% for those without.

“If blistering occurs you can reassure the patient that they’re likely to achieve a good response,” said Dr Agarwala, adding that this effect provided further evidence for an immunological basis for the mechanism of action.

Based on the immune mechanism of action PV-10, he said, was likely to work well in combination with other immunotherapies, such as ipilimumab.