Parallel imports – an overview for pharma 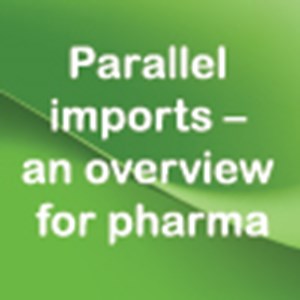 The craving for cheap drugs has never been greater. For those patients and policymakers in developing countries, the existence of parallel imports is less a concern than a blessing. Yet for pharmaceutical companies themselves, there is the concern that an increasing trade in parallel imports would severely damage research-intensive activities and ultimately slow down the development of the very same drugs that are being traded in ‘grey’ markets today.
Last Updated: 27-Aug-2010

The craving for cheap drugs has never been greater. For those patients and policymakers in developing countries, the existence of parallel imports is less a concern than a blessing. Yet for pharmaceutical companies themselves, there is the concern that an increasing trade in parallel imports would severely damage research-intensive activities and ultimately slow down the development of the very same drugs that are being traded in ‘grey’ markets today. Hence increasingly, regulation of parallel imports has become a critical issue in the eyes of many involved at the top of the industry and many are calling for stronger international patent rights to eradicate – or at least limit – the practice.

As always, there are different view points for different players and several different schools of thought on how the matter might be solved. In terms of academic research into the issue, several important economic studies have already highlighted the potential long-term damage to the pharmaceutical industry and other studies have addressed the implications of parallel trading for developing countries themselves. Everything else aside, this is doubtless a growing issue for the pharmaceutical companies of the world and the UK is not exempt from the implications either.

In laymen’s terms, parallel imports – or grey-market imports – are products that are produced in one market under the protection of national patent protection laws and then exported to another market without the authorization of the local copyright holder in question. Typically, having been purchased at a cheaper price in country (A) to that of the prices for the product in country (B), the goods are then sold in the second market at a differential that is usually somewhere between that of both markets. In the case of pharmaceuticals, that means that a drug purchased in Spain can then be sold in Germany at a rate that undercuts the local market – as drugs companies set different price points for their medicines in different countries.

Under current EU laws, this process is entirely legal between EU member states. Parallel imports from non-EU members are strictly forbidden under EU law. In this sense, the ‘grey market’ that handles parallel imports is strictly different to that of the ‘black’ market in legal terms. Indeed, as Professor Maskus of the University of Colorado at Boulder notes, the European Court of Justice has consistently pointed to Article 30 of the Treaty of Rome in reaffirming the supremacy of the free markets over international property rights. In terms of assessing the effects of parallel imports on competition and prices in developing markets, Professor Maskus’ work is well worth a read. In the United States, prescription drugs are legally protected against the process, while other aspects of their laws remain slightly more ambiguous. Thus, however unethical this practice may appear, universally illegal it is not.

In terms of the long-term implications for drugs makers, despite much brouhaha from those with a vested interest in the trade, several studies have now shown the potential dangers that parallel trading can hold for research and R&D. While charging existing practices with inhibiting ‘market access for patients’, Professor Maskus writes that ‘If prices were set equal to, or even below, marginal cost of production the pharmaceutical companies would not be able to recoup their investments and the economic incentives for research and development would disappear’. According to his study, ‘R&D accounts for perhaps 30% of total costs for U.S. pharmaceutical firms’. Furthermore, the Association of the British Pharmaceutical Industry asserts that while ‘the UK-based pharmaceutical industry currently spends some £9 million a day in the search for new medicines’ parallel trading ‘reduces the capacity of the industry to maintain this level of R&D investment’.

Another school of thought however, has consistently argued the positive implications of parallel trading, citing the free-market benefits of the practice – such as price equalization. In response to this, a recent counter-study by the London School of Economics concludes that the practice provides ‘no direct benefits to patients’ and argues for ‘a re-evaluation of current practice by policymakers’. In commenting on the study, Dr Panos Kanavos, the study’s lead author said: 'The study clearly makes the case for urgent further debate before any additional legislation in support of parallel trade is passed, at EU or country level. There is no evidence of sustainable dynamic price competition in destination countries, with no corresponding indirect cost savings. The supposed benefits of this system need to be reviewed’. In the light of this new evidence, it is difficult to see how the practice benefits anyone but the network of grey-market traders that make substantial profits from the trade. For the pharmaceutical industry itself, the practice continues to provide a threat to further investments as it eats into firms’ profits. To echo the words of the LSE study, further debate of the practice should precede any additional national or supranational support.