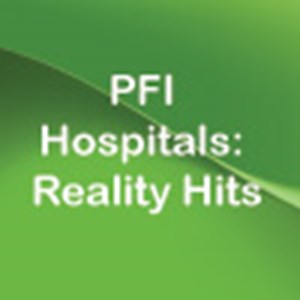 Originally born under the Conservatives, but fully evolved under Labour, Private Finance Initiatives (PFIs) essentially offered the NHS an alternative way of paying for new hospitals and renovations at a time when public capital was said to be limited.
Last Updated: 27-Aug-2010

Originally born under the Conservatives, but fully evolved under Labour, Private Finance Initiatives (PFIs) essentially offered the NHS an alternative way of paying for new hospitals and renovations at a time when public capital was said to be limited. Specifically, instead of being burdened with the entire weight of the costs upfront, under PFI schemes private firms funded the initial construction, while NHS Trusts were left to pay off the resulting loans over a 30 to 40 year period. To make matters even more obtuse, many of these contracts also include agreements to provide many of the hospitals’ non-clinical services, such as laundry, catering and maintenance. The NHS pays a fixed annual fee for both repayments and services.

While some critics will go straight to the root of the schemes, the truth is that having been signed in brighter economic conditions under the last government, a lot of these schemes are now beginning to look like poor value for money as new cost and tax pressures hit the NHS family and yearly repayments take up even greater chunks of NHS budgets. In so many ways then, the failure to predict the current day shortcomings of the Private Finance Initiatives is in many ways microcosmic of our times. Indeed, in the same way that Gordon Brown once boasted that he had eliminated the cycles of Boom and Bust, the architects of PFIs argued that in a world of never ending increases in affluence, hospitals would have little trouble in paying for the schemes over a lengthy period of time. Yet with tough times now afoot as a result of everything from increased cost pressures to substantial increases to VAT and National Insurance rates, critics are now voicing fears of a £65bn ‘NHS Mortgage’, as well as questioning the very premise of the schemes in the first place.

The most palpable analogy to these contracts is obvious. A couple take out a sizeable mortgage based on a steady growth in their short-term income. Yet when an unexpected blow to their finances finally hits, they’re left in fiscal limbo and the deal doesn’t look so good in hindsight. Professor John Appleby, chief economist at the King's Fund health think-tank evidently concurs with this parallel, opining that, "It is a bit like taking out a pretty big mortgage in the expectation your income is going to rise, but the NHS is facing a period where that is not going to happen”.

Yet at least when they were first announced, PFI schemes did seem to offer more than a few benefits to the state. All things considered PFI contracts have led to the creation of literally tens of new hospitals without the need for any real capital up front. Indeed, it is difficult to imagine how so many modern, glass-atrium adorned new buildings would have sprung up all over the country otherwise. So when critics declare that the government would have gotten better rates on the open markets, they are perhaps overstating the ease with which that might have occurred – at least in political terms. Moreover, the schemes also offered NHS trusts a sense of assurance about their finances, by ensuring a fixed annual fee for repayments and services. As recently as January of this year, former Health Secretary Alan Johnson reiterated Labour’s attachment to the schemes, declaring “PFIs have always been the NHS’s 'plan A’ for building new hospitals … There was never a 'plan B’.”

Of course, the greatest challenge to this kind of economic short-termism is a sense of fiscal prudence and that great unknown we call the future. For regardless of how it is spent, the previous government has still committed us to tens of billions of pounds worth of expenditure over the coming decades, without leaving much flexibility for future re-adjustments. Hence what may then have seemed like convenient mechanisms for concealing sizeable public debts are now criticized both for their comparatively high costs relative to today’s rates as well as the tremendous pressure that they exert on local trusts in times of economic difficulty.

Yet for all the various pros and cons of the schemes, perhaps the overriding concern going forward is the extent to which these agreements lack the flexibility to be renegotiated. Part of this is simply down to how enormously complex a lot of these agreements really are. For example, if a private consortium is forced to renegotiate its contract with an NHS trust, should that not also allow said private firm to renegotiate its own contracts with third party suppliers, such as maintenance firms? Put otherwise, these are far from simple contracts and one small change at the top can easily trigger a chain of reactions below it – particularly when so many PFIs are heavily leveraged entities themselves. Nevertheless, that is not to say that some kind of moderate renegotiation should not be attempted. Indeed, that is precisely what some MPs - as well as the National Audit Office - are now calling for.

Writing in this week’s Financial Times, Jesse Norman, Conservative MP for Hereford and South Herefordshire, argues that at a time of great fiscal retrenchment, it is necessary for PFI consortia to play their role too. Specifically, Mr. Norman asserts that while current rates of interest may well have been acceptable mid recession, PFI consortia should now offer a rebate on these rates – citing the precedent of the 2002 ‘Voluntary Code’ agreement. He also notes that while commercial contracts cannot be broken, all it may take is a little encouragement from the government – particularly given the extent of the government’s leverage over several of the largest contractors. According to a study by the management consultancy firm McKinsey and Company last year, if current contracts were merely adjusted to reflect the recent change in interest rates, the government could save up to £200m a year in costs here alone.

In other words, while there is no easy way to walk away from these agreements (regardless of their initial merit) it is the government’s duty to try to do something to ease the burden on the public sector today. Particularly when the National Audit Office has already warned that PFI funded hospitals may soon be forced to make cuts to patient services in order to fund the necessary savings.