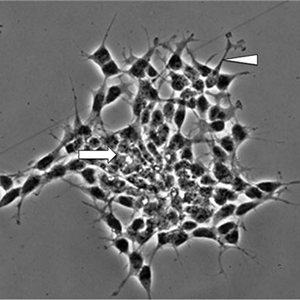 The SH-SY5Y cell line is in the widespread use in experimental neurological studies, including the analysis of neuronal differentiation, metabolism, functions related to neurodegenerative and neuroadaptive processes, neurotoxicity, and neuroprotection.
Editor: BANBAN LIU Last Updated: 10-Sep-2021

SH-SY5Y cells, the subline of the parental line SK-N-SH cells, are originally established from a bone marrow biopsy of a neuroblastoma patient with sympathetic adrenergic ganglial origin. SK-N-SH were subcloned three times: first to SH-SY, and then to SH-SY5, finally to SH-SY5Y. SH-SY5Y were deposited to the ATCC® in 1970 by June L. Biedler. Once the primary mammalian neurons derived from embryonic central nervous system tissue terminally differentiate into mature neurons, the cells can be no longer propagated. While the application of SH-SY5Y overcomes this limitation [1].

The SH-SY5Y cell line is a comparatively homogeneous neuroblast-like cell line, which exhibits neuronal marker enzyme activity (tyrosine and dopamine-β-hydroxylases), specific uptake of norepinephrine (NA), and expresses one or more neurofilament proteins. SH SY5Y cells also express opioid, muscarinic, and nerve growth factor receptors. In addition, SH-SY5Y cells are able to proliferate in culture for long periods without contamination, which is a prerequisite for in vitro cell model developing. Compared with the large-scale expansion before differentiation, the culture is relative easy and low cost to culture compared to primary neurons. The ethical concerns associated with primary human neuronal culture are not involved as these cells are considered a cell-line. Besides, as they are human-derived, SH-SY5Y neuroblastoma cells express a number of human-specific proteins and protein isoforms which are not inherently present in rodent primary cultures. Moreover, differentiation synchronizes the cell cycle. The cell cycle of undifferentiated shsy5y cells and other commonly used cell lines can drastically fluctuate, so as to produce a homogenous neuronal cell population. Thus, SH-SY5Y cells widely used in neurobiology research [2]. 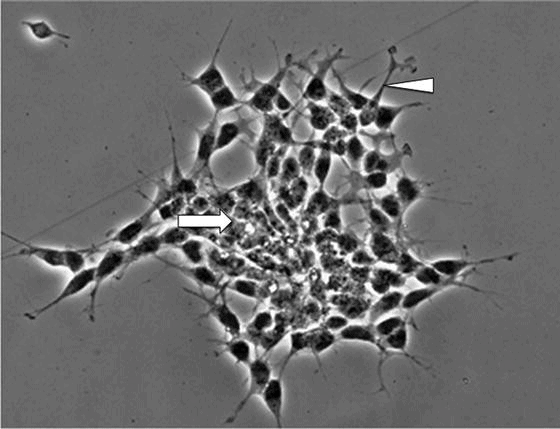 Figure 1. Undifferentiated SH-SY5Y cells. Cells tend to grow in clusters and may form clumps of rounded cells on top of one another (arrow). At edges of the cluster, cells begin to extend short neurites (arrowhead) 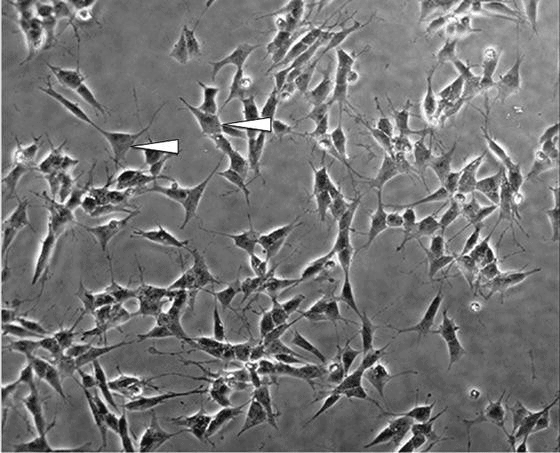 Figure 2. Differentiated SH-SY5Y cells. Cells do not cluster and have a more pyramidal shaped cell body (arrowhead). Neurites begin to extend, reminiscent of dendrites and/or axons

Cell subculture: Aspirate medium under sterile conditions. Rinse adherent cells once with sterile 1× PBS pre-warmed to 37 °C or room temperature. To prevent detaching cells, add the PBS to the inner wall of the petri dish that doesn’t have cells attached. Do not add PBS directly onto cell monolayer. Gently tip the flask so that the PBS washes over the cell monolayer. Aspirate PBS. Add trypsin to adherent cells for approximately 2 min or until cells visibly detach from petri dish. Neutralize trypsin by adding an equal volume of DMEM medium containing 10 % FBS. Collect detached cell suspension and centrifuge at 1,000 rpm for 5 min at room temperature to concentrate cell pellet. Aspirate supernatant carefully without disturbing the cell pellet. Gently suspend pellet in DMEM medium containing 10 % FBS. To separate cells from clumps, pipette up and down gently until the suspension appears homogenous. Count cells using a hemocytometer and plate at approximately 3 × 103 to 1 × 105 cells/cm2. Culture cells at 37 °C, 5 % CO2. Growth medium should be refreshed every 3–5 days. Monitor cells for confluence. When cells reach 80–90 % confluence, subculture as described below.

Freezing Down: Harvest 80–90 % confluent monolayer and pellet cells as described above. Gently suspend the cell pellet in 1 ml of 90 % FBS, 10 % DMSO in a sterile 1.5 ml screw cap vial appropriate for storage in the vapor phase of liquid nitrogen. Store cells at −80 °C for approximately 24 h in an insulated cryobox and then transfer tubes to liquid nitrogen for long-term storage.

Notes: 1) Recommendations on the composition of the growth medium for SH-SY5Y cell proliferation vary by cell line distributors.

2) Air will reduce the survival rate of cells. Therefore, be careful not to introduce air to flasks or tubes when pipetting/transferring cells.

3) The color of the medium indicates the metabolic rate of the key components of cells. When medium becomes more acidic (color looks more yellow than red), it may be the time to change the medium.

4) Rinsing with PBS to remove the majority of the serum contained in growth medium. Trypsin works more efficiently in the absence of serum as serum would inhibit its activity.

5) Reduce the time cells are exposed to trypsin. After 1 min exposure, you may tap the flask gently to assist in detachment.

6) You will find that SH-SY5Y cells need to be plated at a density conducive to cell–cell communication in order to proliferate. If cells are plated too sparsely, the growth rate will be reduced and the cell death rate will be high [1,2].

SH-SY5Y cell line is widely used in laboratory medical scientific research, such as drug development and Parkinson’s Disease research, based on the advantages of its human origin, catecholaminergic (though not strictly dopaminergic) neuronal properties, and easy maintenance [2].

Parkinson’s Disease (PD) is an age-related progressive neurodegenerative disorder with a prevalence of 1%-2% in people over the age of 50. Pathologically, PD is characterized by the loss of mesencephalic dopaminergic (mDA) neurons. Because of its prevalence and lack of effective treatment, PD is a major societal health problem. Therefore, the development of a stable and reliable dopaminergic neuronal cell model is particularly necessary for studying the pathogenesis of PD and developing therapeutic strategies [2].

SH-SY5Y cell line has also been applied to research and development trials in the field of neuro-related drugs.

1-methyl-4-phenylpyridinium (MPP+), 6-hydroxydopamine (6-OHDA) and rotenone are the most frequently used compounds in drug-based approaches, as they can dysregulate multiple cellular pathways, focusing on mitochondrial dysfunction and oxidative stress [3].

In a study published in the journal Environment International in 2020, human neuroblastoma SH-SY5Y cells are used to evaluate effects on oxidative stress, neuronal development and cell death signaling pathways under the induction of glyphosate and its metabolite aminomethylphosphonic acid (AMPA). Their results indicated that glyphosate and AMPA had cytotoxic effects on neuronal development, oxidative stress and cell death through apoptotic, autophagy and necrotic pathways, which confirmed that glyphosate environmental exposure becomes a concern. The study demonstrates that SH-SY5Y cell line could be considered as an in vitro system for pesticide screening [4].

Some researchers used SH-SY5Y cell line to study the anti-tumor effect of angelica sinensis polysaccharide (AP). They aimed to explore the effects of AP on SH-SY5Y neuronal cells and its underlying mechanisms. In summary, AP was first identified as inhibiting proliferation, migration, and invasion but inducing apoptosis. AP might inhibit the tumorigenesis of SH-SY5Y cells through miR-675-mediated inactivation of the PI3K/AKT and JAK/STAT pathways. And KIF1Bβ may be a target of miR-675[6].

In conclusion, the SH-SY5Y cell line is in the widespread use in experimental neurological studies, including the analysis of neuronal differentiation, metabolism, functions related to neurodegenerative and neuroadaptive processes, neurotoxicity, and neuroprotection.

Where to get SH-SY5Y and other Human Neuroblastoma Cell Lines?

It is our pleasure to help relative researches to move forward. All the products of AcceGen are strictly comply with international standards. For more detailed information, please visit our product portfolio or contact inquiry@accegen.com.