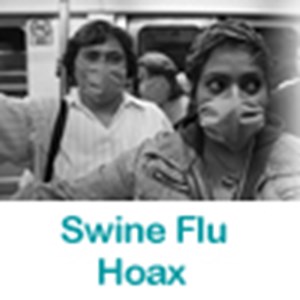 A selective memory is a wonderful thing. That is, if you're a conspiracy theorist or an opportunistic critic of any kind. Yet, for those of us with memories of a more consistent mold, a lot of the current and decidedly harsh criticism directed against the World Health Organization’s handling of the just passed H1N1 'Swine Flu' outbreak must be questioned in kind.
Last Updated: 27-Aug-2010

A selective memory is a wonderful thing. That is, if you're a conspiracy theorist or an opportunistic critic of any kind. Yet, for those of us with memories of a more consistent mold, a lot of the current and decidedly harsh criticism directed against the World Health Organization’s handling of the just passed H1N1 'Swine Flu' outbreak must be questioned in kind.

Let's start at the beginning. While the very first cases of swine flu were reported in Texas and California in Early March, by April over 900 cases had been reported in Mexico and the WHO had upgraded its pandemic assessment threat from 3 to 4 on a six point scale. Around the same time the European Union began to warn its citizens against traveling to Mexico, where the virus was alleged to have found its origins. And with initial deaths in Mexico suggesting an early fatality rate of around 10% (albeit not laboratory confirmed) the world's scientists scrambled to both better understand the genetic makeup of the virus, as well as to develop a credible vaccine. As a New Scientist article from around the time confirms, the simple fact is that at the point of its initial detection back in April and March of 2009, scientists simply didn't know what to expect. Would H1N1 go on to claim as many lives as the Spanish Influenza of 1918, or would it instead prove to be yet another 'great preparation' for the real crisis of the future? Would the virus go on to produce a potentially deadly mutation in response to its new human carrier, or would it simply peter out within months, harmless in its original form? The honest truth is that at the time of its earliest detection, no one really knew.

By June 11th, and shortly after the first cases of the virus had been detected outside of North America, the WHO declared H1N1 'swine flu' to be an emergency pandemic (or level six on the WHO's threat scale), triggering vaccine makers to go ahead with plans for mass production of a vaccine and shortly leading to large orders from governments the world over. The WHO itself predicted a global death toll of up to 7.5 million and the UK's Chief Medical Officer, Sir Liam Donaldson anticipated over 65,000 deaths in the UK alone.

Of course, with the wonderful gift of hindsight in place, it's now easy to laugh off these predictions entirely, safe in the knowledge that in reality, H1N1 killed far fewer people than seasonal flu does every single year.

So, what does this tell us about the WHO's reaction? And what lessons might we take from it going forward?

Unquestionably, to the lay person in the street, the sheer inaccuracy of the WHO's earliest predictions are nothing short of unforgivable. Not only did they get it wrong, but they did so by a country mile. Yet, from a short glance at the history of these outbreaks, the story changes significantly. As the WHO noted at the same time as it declared the virus to be a pandemic back in June of last year, pandemics are defined not by their initial severity, but by how fast they travel. And critically, by the potential damage of their often much more powerful second waves. Indeed, while the pandemic of 1918 started slowly, it went on to kill an estimated 50 million people.

In other words, what the WHO really did was to prepare properly. Yes, they took absolutely no risks whatsoever, but to suggest that they deliberately circumvented the science in order to produce commercially palatable recommendations is to ignore the evidence in its entirety. Critically, this is not the soft soap of apologetic journalism, but rather the facts as presented by the vast majority of the world's scientists and experts. For example, at the time of the outbreak, David Heymann, then Head of Security at the WHO said that 'science cannot predict what course this virus will take as it continues to spread in humans'. Hundreds of other scientists queued up to offer the uniform opinion that the development of the virus was impossible to predict. In an article for the Los Angeles Times on April 27, Dr. Christopher Olsen, a flu expert at the University of Wisconsin said it was 'impossible to say with any assurance what's going to happen'. Today, the expert opinion is no different. The WHO was right to react and the world is extremely fortunate that its predictions have amounted to nothing.

So, if the WHO acted responsibly, what can be said of all the brouhaha and conspiracy theories that currently surround its judgments? Well, there are probably two possible ways to look at it. The first answer is that nothing beats a bit of good old fashioned investigative journalism to hold the authorities' feet to the fire. Here, the recent accusations out of the BMJ and the independent human rights body, the Council of Europe ask fair and necessary questions of one of the world's most powerful public bodies. Indeed, it certainly is true that some experts were predicting a milder virus than pandemic status might suggest. Dr Wolfgang Wodarg, for example, a German doctor and former member of Parliament told the BBC: This was suddenly, a fast-spreading mild flu, a pandemic. But this is not the definition of a pandemic I learned, which has to be severe, with a much higher than usual death rate. Yet from a less favourable angle, these kinds of largely unsubstantiated accusations of malpractice severely damage the reputation and credibility of an essential instrument in our daily fight against medical catastrophe. It’s one thing to say that, yes, in hindsight the WHO were overly pessimistic. It’s quite another to suggest that they declared a pandemic purely for commercial benefit.

Regardless of the conclusion that you come to, some facts are now clear. First, and in relation to one of the key questions raised by one of the BMJ articles (D. Cohen and P. Carter Br. Med. J. 340, c2912; 2010) - namely that 'pharmaceutical companies, which had invested around $4 bn (£2.8bn, €3.3bn) in developing the swine flu vaccine, had supporters inside the emergency committee, who then put pressure on WHO to declare a pandemic' - the accusations are not borne out by the results. Specifically, and as journalists for Nature have shown, numerous countries including the UK, France and Canada had already placed large orders for the vaccine well in advance of the WHO's eventual decision to declare the outbreak a pandemic on June 11th. When questioned by Nature with this timeline, the authors conceded the point, commenting You are absolutely right.

Second, and perhaps with a little more credibility, comes the question of a conflict of interests. Or perhaps more accurately, the issue of transparency. Namely, the authors assert that some, if not many of the very same scientists that sit on important WHO committees, also receive funds from the private sector - including, yes, you guessed it, major drug companies. Specifically and in the case of the WHO's 16-member 'Emergency Committee', the investigations have lambasted the body's decision to keep the committee's composition secret until the outbreak is over. This seems more than a little ironic given that this policy is designed precisely to limit potentially contentious outside influence. Otherwise, and in the case of one of the other groups advising the WHO on flu, the European Scientific Working Group on Influenza (ESWI), the BMJ now accepts that the researchers in question had declared their interests sufficiently in other places.

In terms of the broader question of private funding, firstly one has to accept that as it currently stands, almost all of the research that goes on in these areas is privately funded - often by drug companies. It is also true that, yes, some of the world's foremost experts have been known to give speeches to conferences supported by influential private sector bodies, and yes, they are sometimes paid for them. However to assert that a handful of speeches necessarily produces intentionally skewed science is not only to insult the professionalism of the majority of the world's medical experts, but also to make an accusation that really requires a little more evidence than is currently being provided. That is, evidence based on scientific conclusions, and not on insinuation and unfounded conspiracy.

No doubt, had H1N1 turned into a global killer on the scale of the Spanish Flu, and had the WHO either underestimated its severity or underprepared for the event, we can be in no doubt that the very same critics would now be scolding the WHO for not acting strongly enough. In other words, Margaret Chan and Co simply cannot win. Yet, when potentially faced with another global killer that preys particularly on children and young adults, shouldn't caution be the default response? Marc Lipsitch, an epidemiologist at Harvard School of Public Health evidently thinks so, having recently told Nature that it the WHO's advice was sound, adding that it is 'ironic' that officials are being criticized for showing necessary caution.

In a letter written to the editors of the studies, Margaret Chan, the WHO's Director-General, also warned that 'without question' the articles will leave many readers with the impression that WHO’s decision to declare a pandemic was at least partially influenced by a desire to boost the profits of the pharmaceutical industry.

Thus, two things are clear. First, it’s perfectly human to crave a conspiracy. And second, some of the world’s foremost medical experts have sometimes been known to attend the odd industry-sponsored conference. Other than that, the WHO should be commended for being alert, responsive and yes, when dealing with millions of lives, decidedly cautious.