The 10th Annual Congress of the European League Against Rheumatism (EULAR) 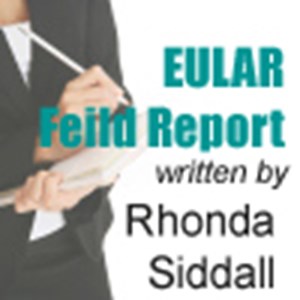 Certolizumab pegol showed improvements in RA symptoms as early as the first week of treatment and early inhibition of progression of structural joint damage in the RAPID 1 trial published last year. Now, results from an open-label extension study to RAPID 1 show that treatment improvements were sustained for two years in patients maintained on 400 mg certolizumab every two weeks and methotrexate. A separate analysis also presented at EULAR showed that patients receiving certolizumab whose symptoms were controlled as early as six weeks had significantly better control of symptoms after a year of treatment compared to patients whose symptoms responded later at 12 weeks.

RAPID 1 lead investigator Professor Edward Keystone of Mount Sinai Hospital, Toronto, said: "It is important to know that a potential new treatment has a sustained effect."

The one-year results from RAPID 1 were published last October in Arthritis & Rheumatism and showed that ACR20 response rates in patients receiving 200 mg and 400 mg of certolizumab pegol were 58.8% and 60.8%, respectively, compared with 13.6% for placebo in patients who had previously failed to respond to methotrexate. Latest results from the two-year open-label extension study show that ACR20 response rates in patients who completed treatment with certolizumab pegol 200 mg or 400 mg every two weeks were 68.2% and 69.5%, respectively, at 100 weeks. ACR50 response rates were 55.2% and 51.5%, respectively. Serious adverse events occurred in a fifth of patients, with 7% affected by serious infections. Two cases of tuberculosis were reported but there were not opportunistic infections.

Certolizumab is the only PEGylated type of anti-TNF agent. UCB submitted a marketing authorization application to the European Medicines Agency in June 2008 for the approval of certolizumab pegol in combination with methotrexate for treating moderate to severe RA in adults who have inadequate response to disease-modifying therapy. A company spokesperson said UCB expected the drug to be available by the end of this year.

But results from a new study could support the use of rituximab in the treatment of early rheumatoid arthritis. Rheumatologist Professor John Isaacs of Newcastle University’s Institute of Cellular Medicine said: “These data show the efficacy of using rituximab earlier in the RA treatment pathway.” Rituximab is currently licensed for use in combination with methotrexate to treat adults with severe rheumatoid arthritis who have failed anti-TNFs.

The IMAGE study presented by Dr Paul-Peter Tak from the Academic Medical Center at the University of Amsterdam in The Netherlands showed that 2 x 1000 mg rituximab plus methotrexate achieved superior clinical and radiological responses compared with methotrexate alone in patients with early active rheumatoid arthritis (RA) who were naive to methotrexate. Lower doses of rituximab (2 x 500 mg) were also studied. Dr Tak said: “Our findings showed significantly improved clinical outcomes and inhibition of joint damage with rituximab at higher doses that could be seen by six months. The lower doses improved clinical but not radiological outcomes." ACR20, ACR50 and ACR70 responses were 80%, 64.8% and 46.8% in the higher dose RTX group compared to 64.3%, 41.8% and 24.9%, respectively, in the placebo plus methotrexate group (P<0.0001). Mean change in mTSS was 0.359 in the higher dose RTX group and 1.079 in the placebo/MTX group (p<0.001). The percentage of patients with a change in mTSS was 63.5% versus 53.4% in the higher dose RTX and placebo/MTX groups, respectively (p<0.05). The percentage of serious adverse events was similar across the treatment groups.

Dr Edward Vital from the University of Leeds suggested the difference in results between the doses could relate to ongoing synovitis. "My guess is that in this study, patients treated at the lower dose still had residual disease.” In a separate study presented at EULAR by Dr Vital, RA patients who had failed to respond to initial treatment with rituximab were successfully re-treated with a second course after six months. Dr Vital said: “Around a third of RA patients fail to achieve an adequate response the first time they are treated. Our study has shown that re-treating at a specific stage can enhance clinical responses to a level equal to those who fully respond to the RTX course at first administration, providing hope for patients classified as non-responders.”

AN oral JAK-3 inhibitor shows promising efficacy in rheumatoid arthritis according to interim results from a phase II dose ranging study. Presenting the results at EULAR, Dr Roy Fleischmann from the University of Texas in Dallas said: “The development of oral small molecule JAK inhibitors represents a new approach in the treatment of RA. These drugs offer the potential for more precise targeting than existing oral disease-modifying treatments in addition to a more convenient oral administration than biological treatments.”

Twelve-week results from the six-month study showed that a quarter of active RA patients who had failed standard disease-modifying treatments such as methotrexate receiving either 10 mg or 15 mg twice daily of oral JAK-3 inhibitor CP-690,550 achieved an ACR70 after 12 weeks of treatment. The investigational treatment was compared to the anti-TNF adalimumab or placebo.
The percentage of patients achieving ACR 70 scores for adalimumab and placebo at 12 weeks was 3.8% and 5.1%, respectively. CP-690,550 also achieved statistically significantly superior ACR 20 and ACR 50 scores at the 5, 10 and 15 mg doses studied. Dr Fleischmann said: “This drug is clearly effective.”

The most frequently reported treatment-emergent adverse events with the JAK-3 inhibitor were urinary tract infections, diarrhoea, bronchitis and headache. Dr Fleischmann said plans for a Phase III trial using the 5 and 10 mg twice daily doses were underway but no further details were available. He added that if the Phase III trial showed CP-690,550 was as efficacious as anti-TNF agents with a well defined and manageable safety profile, the drug could be “a major drug for the treatment of rheumatoid arthritis as it is easier to administer and manufacture because it is a small molecule. “It’s likely to be cheaper than anti-TNF drugs,” he added.

TWO-year results from the COMET trial show that ongoing treatment of rheumatoid arthritis patients with a combination of etanercept and methotrexate led to better outcomes than treatment with methotrexate alone. Presenting the results at EULAR, Professor Paul Emery, lead COMET investigator and Professor of Rheumatology at the University of Leeds, said: “The major finding of this study is that the combination of etanercept and methotrexate produces a high rate of remission that is sustained over two years without significant additional risk.”

The COMET study was designed to compare the clinical efficacy and safety of etanercept and methotrexate combination therapy with methotrexate (MTX) alone on clinical disease activity and progressive joint damage in patients with early rheumatoid arthritis. After a year, 50% of patients in the combined-treatment group and 28% in the methotrexate-only group achieved a DAS28 remission. Subjects who completed a year of treatment with combination therapy or methotrexate monotherapy entered year two.