The Arrival of the “Age of Abundance” 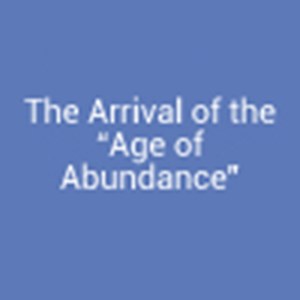 We are surrounded by millions of everything

We are swamped with unlimited options, ideas, goods and services, intricate possibilities and simply drowning in overflow…never in the history of mankind have we had so much so easily and simultaneously available for so many in so many aspects across the farthest corners of the world. The arrival of the age of abundance is now a mainstream challenge for all creators and producers of ideas, goods and services. On one side we are witnessing the transformation from the ‘age of scarcity’ to the ‘age of abundance’ on the other we are in a massive global flood drowning the ordinary, mediocrity and old age execution.

We are in the age of abundance
It all started out with the “age of curiosity” where in the earlier darker ages, whatever shined, the masses of the period gleamed and glued. Followed by the “age of scarcity” where any novel concept created by anyone created instant local and global demands and paved paths to massive successes. Now we are in the “age of abundance” where for every great idea there are millions of better ones. We are drowning in surplus of overly duplicated concepts and lost in massive copycat clutter. The survival of the fittest is now measured not by being first or big in the marketplace but by being very unique all the way.

Hence today 99% of so called great things and ideas are struggling to survive.

A quick study of any vertical market will provide all the proof needed.

The concept of the “age of abundance” and its linkage to historic perspective was popularized in 2005; when ‘irrational exuberance’ was reaching its peaks before the global financial meltdown. A decade later the notion of ‘age of abundance’ has become a very hot issue in every sector.

Businesses and professionals are challenged, on how to demonstrate their skills and educational prowess when all innovative and incubative processes are being fertilized in the same old syllabuses and binders and only churning the same old results.

Organizations are faced to prove their global soft power asset management skills to enable their claim to image supremacy while need to shred old strategies and campaigns based on cut and paste dog and pony shows of the same old struggling concepts. How can organizations stand up to the ‘age of abundance?’ How can bold and authoritative dialogue reflect on the demands of this special age? How fast can teams re-train their thinking and shun mediocrity?

Unfortunately, the ‘do not rock the boat’ model blended with ‘political correctness’ does not allow any serious debate on such matters. For these reasons the polite, prolonged management meetings pre-occupy with fancy charts showing lack of funds, pending job-cuts and decline in market share, while timid nods along the way secure the status quo. It’s time to change.

How can you liberate yourself?
How can you survive in the age of abundance?
How can you find your own image supremacy of innovative excellence?
More amazing readings...

2005:
The Age of Abundance Requires Innovation – by Naseem Javed http://www.ecommercetimes.com/story/43467.html The original article was published in 2005 and was picked up by many other publications

2007:
The concept of the “Age of Abundance” was later picked up by Brink Lindsey in his book by the same name “Age ofAbundance” published by Harper Press , he even had chapters entitled “Climbing Maslow’s Pyramid” “Howl” “Learning to Fly”

2011:
Feature Video - Are We Ready For the Coming 'Age of Abundance?' - Dr. Michio Kaku https://www.youtube.com/watch?v=ceEog1XS5OI

2012:
Peter Diamandis, published Abundance: The Future Is Better Than You Think with Steven Kotler, who recently also published “The Rise of Supreman’ etc

2015:
Today, the concept of the ‘age of abundance’ is everywhere Are We Ready For the Coming 'Age of Abundance?' http://bigthink.com/think-tank/are-we-ready-for-the-coming-age-of-abundance

The Future of Retail in the Age of Abundance http://www.retailprophet.com/blog/the-future-of-retail-in-the-age-of-abundance/

About the author:
Naseem Javed, a corporate philosopher and founder of the Image Supremacy Movement is a world recognized authority on global cyber image trends, naming complexities impacting business performance and new global age shifts. He is founder of ABC Namebank, a world-class speaker, syndicated columnist and author of several books. His new works on Image Supremacy leadership programs on innovative performance are getting global attention.