The State of England's Prescriptions 2021

Prescriptions are one of the types of medical treatment that we may expect to encounter the most throughout our lifetime. Whether for the long term, chronic conditions such as diabetes or asthma, a short term injury or illness, or as part of a contraceptive plan, prescription medications can effectively treat a wide range of health conditions.
Editor: Kelly Tipper Last Updated: 22-Dec-2021

The State of England's Prescriptions 2021

Prescriptions are one of the types of medical treatment that we may expect to encounter the most throughout our lifetime. Whether for the long term, chronic conditions such as diabetes or asthma, a short term injury or illness, or as part of a contraceptive plan, prescription medications can effectively treat a wide range of health conditions.

However, there’s much debate over how we use prescriptions as a nation, with the topic frequently discussed in the press. With discussions around the over-prescribing of medications and rising prescription costs currently a hot topic, any changes to the way we use prescriptions will have an effect on millions of people across the country.

With this in mind, we wanted to take a look at just how prescription medications are used in England and how things could change further over the years to come.

Our report looks at the most prescribed medication over the last five years across all regions in England, the future prediction on single item prescription costs in England as well as the views of the British public on prescriptions and medication.

The Levels of Prescribed Medication Over the Last Five Years

Using NHS England digital data, we’ve analysed the type and the number of different medications prescribed across each region in England.

Overall, the most prescribed medication from 2015 up until 2020 are Statin type drugs (Simvastatin, 2015 and Atorvastatin from 2016 to 2021) both are a form of medicine used to lower cholesterol and you will be prescribed these if you have been diagnosed as having high blood cholesterol. From 2015 to 2021 these types of statins have been prescribed 275,526,511 times nationally,

The table below shows the top 5 prescribed medications in totality from the years 2015 up until August 2021.

Which Prescribed Medications are the Most Prevalent in Different Regions Across England?

After Statins, the second most prescribed medication in the North East and Yorkshire, North West, South East and South West is Omeprazole and Lansoprazole (both are types of medicine to reduce stomach acid and to treat indigestion, heartburn, acid reflux and gastroesophageal-reflux-disease (GORD).

In the East of England, Levothyroxine sodium, used to treat an underactive thyroid gland (hypothyroidism), is in second place for their region. In London, the second most prescribed drug is Amlodipine, used to treat high blood pressure (hypertension), and in the Midlands, the second highest prescribed item is another medicine that treats hypotension, Ramipril.

For the East of England and the Midlands, Omeprazole is the third most prescribed medication for their respective regions.

For the North West it’s Amlodipine and for the North East and Yorkshire, the South East and the South West, Levothyroxine sodium (a medicine for an underactive thyroid) is the third highest prescribed medication in these regions over the last year.

How Much Have Prescription Costs Risen in the Last 10 Years and How Much Are They Predicted to Rise?

The chart below shows the average cost per single prescribed item for each year since 2011, where prescriptions charges have risen, on average, by 2.37% each year. According to this average increase, we can predict that by 2035, the average prescription charge for a single item in England could be £12.98. 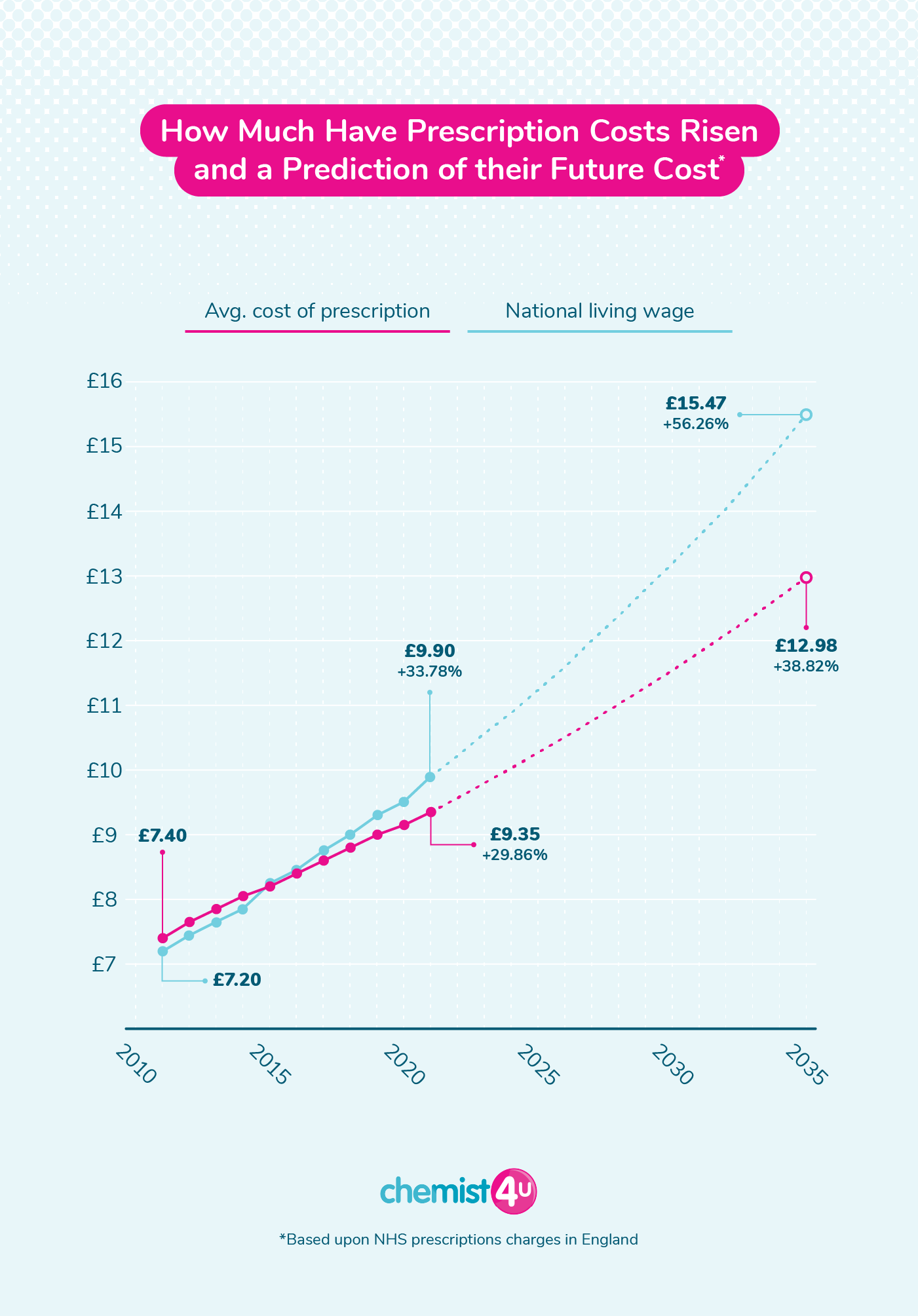 The Rise of the Electronic Prescription Service (EPS)

The Electronic Prescription Service (EPS) sends electronic prescriptions from GP practices to your nominated pharmacy, eliminating the need to wait for prescriptions to be printed and taken to your local pharmacy.

Due to this quick turnaround time, your NHS prescription delivery can be with you within 48 hours; as a result, electronic prescriptions have been growing rapidly over recent years, and particularly since the start of the COVID-19 pandemic.

The chart below shows the number of EPS items within the total number of prescribed items from the NHS Dispensing and Services Summary - England, since February 2020: 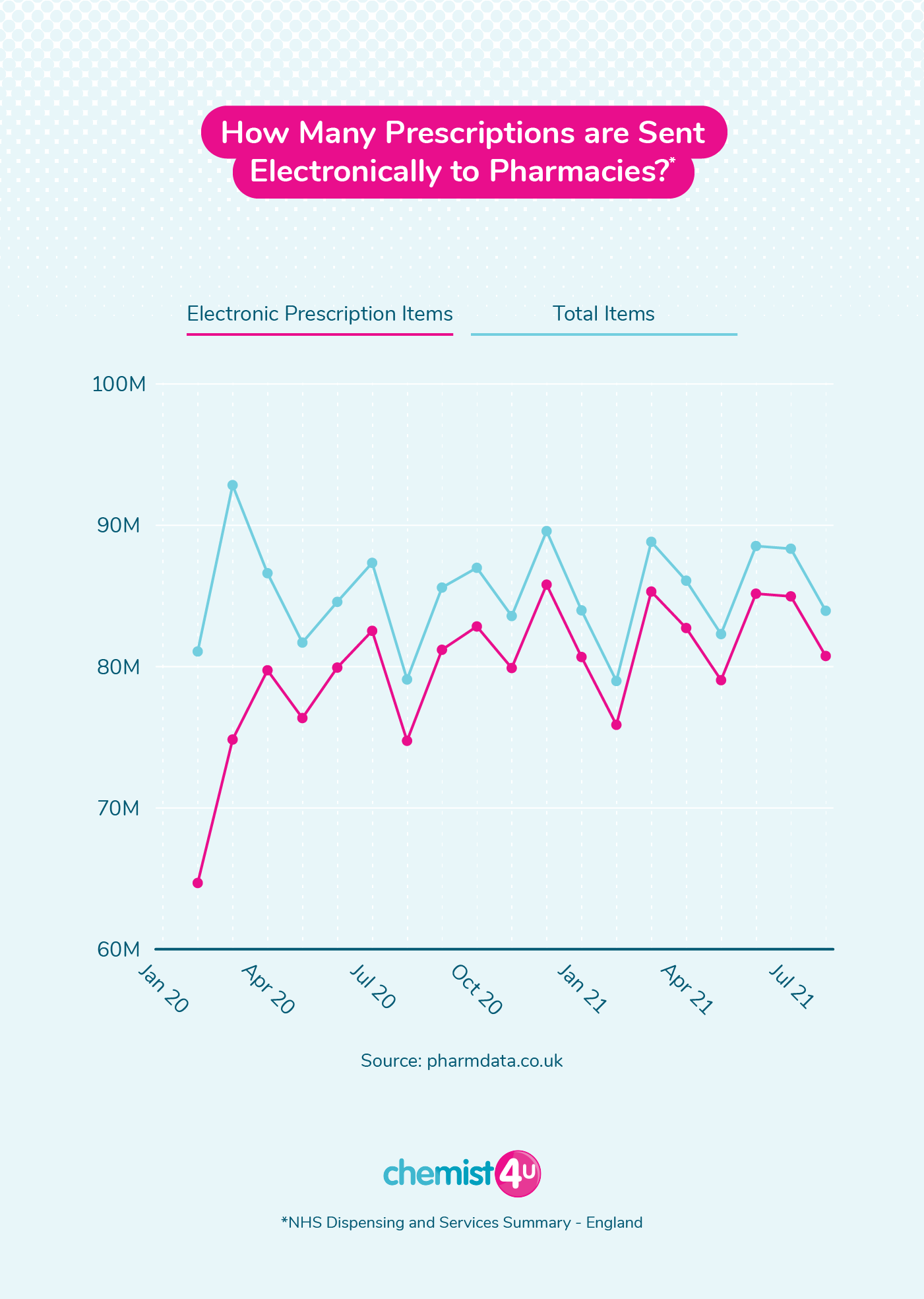 What are the UK’s Views on Prescriptions? 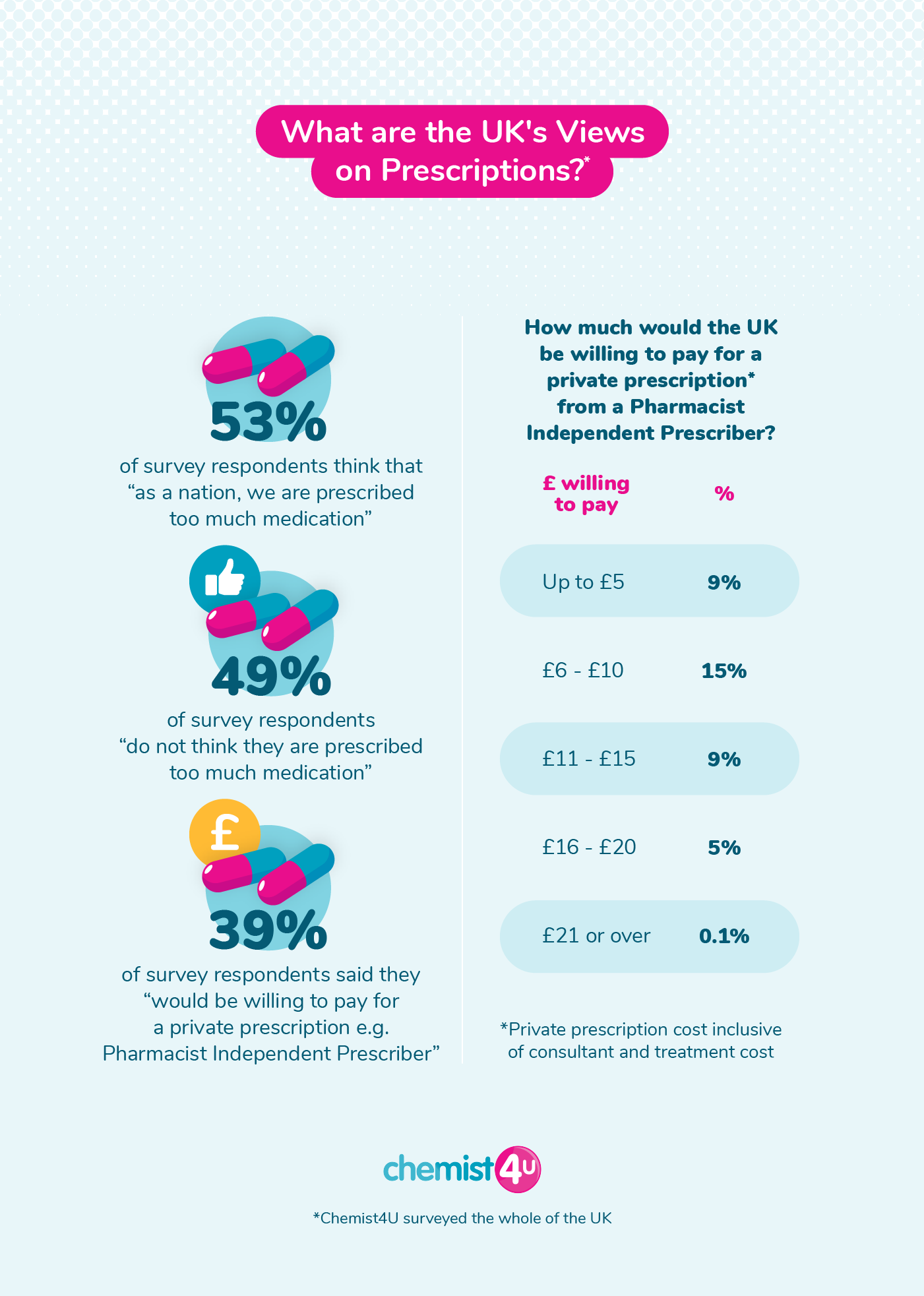 We also asked respondents how they feel about paying for prescriptions. In terms of prescription charges, 39% agreed with the statement “I would be willing to pay for a private prescription from a Pharmacist Independent Prescriber”.

We also asked respondents to select how much they would be willing to pay for one such private prescription.

Censuswide abide by and employ members of the Market Research Society which is based on the ESOMAR principles.