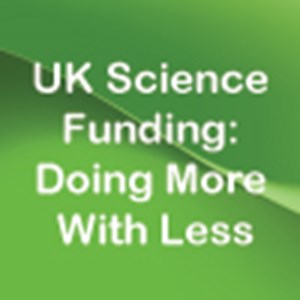 In a climate of fiscal hardship, everybody has a special case to plead. Indeed, when the funding scalpel is out, every department and almost every recipient of public sector funds has a special tale to tell. The truth is, science funding really is that important.
Last Updated: 24-Sep-2010

In a climate of fiscal hardship, everybody has a special case to plead. Indeed, when the funding scalpel is out, every department and almost every recipient of public sector funds has a special tale to tell. The truth is, science funding really is that important. Our universities depend on it. Yet far aside from its importance in mere academic terms , nearly a quarter of our economy depends on science and technology funding – including big pharma. Universities add £59bn to the UK economy every year and important sectors of our economy rely heavily on science and technology funding for research and development. Unsurprisingly then, back in June a long list of business leaders, including the heads of pharmaceutical firms including Pfizer, AstraZeneca and GlaxoSmithKline, wrote an open letter to the government, pleading for special consideration for science. Specifically, they argued that: "Scientists, engineers, and multinational companies will focus their pursuits in countries with the most favourable intellectual, financial and political environments", adding that "The government needs a clear, strong and long-term strategy for making the UK the most attractive country for companies to conduct research and development". Within the age of globalization, and the context of global competition, their predictions are unlikely to be found wanting.

Of course for some, the answer to all of this is obvious. ‘Do more with less’. Yet, as many now argue, that’s precisely what UK researchers have long achieved. The UK has long outperformed itself in terms of funding, with other major G7 economies pumping far more into science funding than Britain. Despite this, the UK still accounts for over 14% of high-impact citations and leads the world in many fields. To ask scientists to expand their research with even less funds now is for many, a step too far. And as many also argue, UK industry may end up paying a substantial price for it.

Nevertheless, that’s exactly what the Business Secretary, Vince Cable is now proposing. In a speech at Queen Mary, the University of London, he argued that with 25% cuts across every government department, scientists would not be exempt from fiscal retrenchment and that they would indeed have to do ‘more with less’. Speaking to the science world, Mr. Cable said: "There is a school of thought which says that Government commitment to science and technology is measured by how much money we spend. Money is important both for the quality and quantity. But it is an input, not an output, measure. The question I have to address is can we achieve more with less?". Unquestionably, the cuts are coming.

To be somewhat favorable to Mr. Cable, he is right to state that public moneys should not be used for those projects which are "neither commercially useful nor theoretically outstanding. And contrary to the views of many, there is not always a direct link between increased funding and output, which is generally measured by citations and papers compared to money spent. Furthermore, as science journalist Frank Swain acknowledged in the Telegraph, justifying seemingly distant and grandiose scientific projects to the public in times of austerity is a particularly tough sell. Namely, while scientists could rightly produce a long list of justifications for some of the groundbreaking research carried out at the Large Hadron Collider near Geneva, to lay person on the streets of Britain, the benefits may appear less clear. "People will want to know why we’re spending however much on the Large Hadron Collider while cutting winter fuel allowance for the elderly", he said, adding "That’s a very emotive argument, and a difficult one to answer because the fruits of scientific labour can appear very distant". Politicians would not be doing their jobs if they weren’t to pick up on this. Yet as Evan Harris at the Guardian has argued: "It is simply not possible to apply a retrospective analysis of university activity, the RAE – which is controversial enough in its metrics and allocation formula – to response mode funding of research council allocations". Indeed, trying to precisely predict the potential fruits of a piece of scientific research before the project has even begun is a bit like asking a historian to pen his conclusion before he’s even entered the archives. It’s a decidedly back to front back mode of thinking.

Perhaps even more worryingly though, and as Mr. Cable gave a nod to in his speech, just as we’re discussing potentially savage cuts to our science and technology budget, other major economies are planning to spend more. As the Business Secretary observed in his speech: "the US is doubling basic science spend between 2006 and 2016. China has seen a 25% increase in central government funds to the science and technology sector. In Sweden, central government funds for R&D will increase by over 10% between 2009 and 2012. And in 2009, Germany announced it was injecting €18 billion into research and higher education during the coming decade". And with such a large proportion of the global economy relying on industries that are essentially fueled by science and technology funding, who can blame them? Furthermore, as the public sector recedes under the pressure of spending cuts, and the private economy is asked to pick up the slack, what sense is there in cutting one of the most obvious sources of private sector growth in such a significant section of our economy? While it’s clear that the governments of most major economies accept this, and are increasing their budgets accordingly, the real question is why are we not doing the same?

True, compared to some of those countries, most notably China, the UK is currently in a far worse fiscal position. Conversely, as the actions of governments all over Europe testify to, fiscal retrenchment is not exclusive to Britain. And as the coalition government’s decision to ring fence spending on health and international aid demonstrates, economic priorities can still be set. Until we receive the results of the October Spending Review, no one can accurately predict the extent to which science will suffer. Mr. Cable has already insisted that the age-old method of simply ‘salami-slicing’ a little bit off everything has gone for good. Even more positively, he’s also repeatedly acknowledged the empirical link between "innovation and economic performance" and has hinted of his broader appreciation for the applied economic value of the scientific profession. Mr. Cable’s reassurances aside however, with the sheer scale of the cuts that the department is now facing, it would be naïve to imagine that scientific community will escape all of the pain. Yet as the director of the Campaign for Science and Engineering, Imran Khan, recently warned: "The UK has a hard-won reputation as a global hub for research. But that reputation could be easily lost". Ahead of the difficult decisions to come in the months ahead, the coalition government would do well to heed his words. The pharma world will be watching.