UK Visa’s and work permits – an overview for Pharma 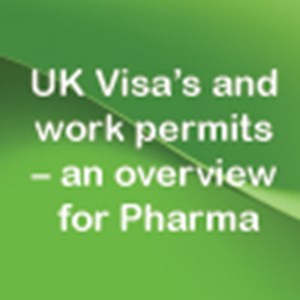 Over the past year or so, the system for issuing VISAs and work permits in the UK has changed dramatically. A knowledge of the practical implications of the new system will be vital for anyone hoping to bring their skills to the pharmaceutical industry in this country
Last Updated: 27-Aug-2010

Over the past year or so, the system for issuing VISAs and work permits in the UK has changed dramatically. A knowledge of the practical implications of the new system will be vital for anyone hoping to bring their skills to the pharmaceutical industry in this country. For years the system was governed by separate sets of rules for everyone. Be it a doctor, a banker or a student, there were different and complex sets of rules for each and every profession - with over 80 different pathways in total.

After several years in the making, last year saw the introduction of an entirely new point-based immigration system. Based on the highly successful and long-standing Australian points system, the new system links ‘points’ directly to skills. Thus, the more skills you have, the more points you accrue and the better your chances of entry. Additional points are granted to those applicants whose skills are most in demand at the time. To this extent, the system still takes into account changing economic factors and the evolving demand for labour in certain sectors of the marketplace. In announcing the new system, the Immigration Minister at the time, Liam Byrne, said: "Our points system is starting on time and on plan. I've no problem with taking the best systems in the world, like Australia's points system, and bringing them to the UK”. As one of the primary hubs of global pharma, thousands of aspiring scientists, biotechnologists and other healthcare workers come to the UK each and every year.

Under the new scheme, workers are separated into five different ‘tiers’, each one covering a particular category of migrant, such as Post-Study Worker, Entrepreneur or Investor. For the majority of those individuals coming to work in the pharmaceutical sector in the UK, only two tiers will typically be applicable. First, for those skilled workers who already have a job offer from a UK firm, Tier 2 replaces the existing system for work permit employment. For those professionals who already have a skilled job offer from a UK company, further applications details are available here on the UK Border Agency’s website.
Yet, for the many migrants looking to come and find work in the sector upon their arrival in the country, Tier 1 (General) applies for all skilled migrants looking for a job or wishing to become self-employed in Britain. It replaces the Highly Skilled Migrant Programme that had been in place since 2002. Applicants in this category are awarded points for attributes in the following areas: age, previous or prospective salary and qualifications. Successful applicants must score 75 points for primary attributes and an additional 10 points for English language proficiency. Further details and application guidelines can be found here.

While the introduction of the new system has broadly been deemed a success, inevitable teething problems still remain. For students particularly, the new system is proving to be vexing.Recent reports of thousands of students stuck waiting in halls throughout London’s Heathrow Airport won’t do wonders for global confidence in the UK higher-education system and there is a good chance that there are some aspiring scientists amongst them. According to one Heathrow immigration officer "We are looking at upwards of 500 to 1,000 stuck in the hall, queues stretching for hundreds of yards down the terminal”. The Tories continue to argue that any prudent immigration policy should include a yearly cap on the number of migrants who can come to the country.

For those migrants who already have an offer from a pharmaceutical company in the UK, little should change under the new system. And for those aspiring health-care industry professionals who are forced to tally up their points totals under the new Tier 1 system, faith should be gained from the fact that the UK still welcomes the kinds of highly skilled, expert professionals that make up the pharmaceutical industry in Britain.