US Prescription Drug Use- The Rise and Rise 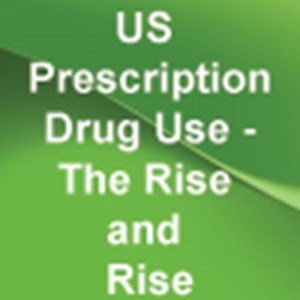 As healthcare innovation produces new treatments, and new information delivers increased awareness, a substantial rise in prescription drug use is only to be expected. For the most part, this can largely be seen as a positive development.
Last Updated: 16-Sep-2010

As healthcare innovation produces new treatments, and new information delivers increased awareness, a substantial rise in prescription drug use is only to be expected. For the most part, this can largely be seen as a positive development. To think of just one area, today not only are we more aware of the challenges that various forms of mental illness can bring, but we’re more willing to face up to them. It is perhaps then unsurprising to learn that the market for anti-depressants has grown significantly in the last ten years. In other areas too, increased screening and health checks mean that more and more of us are pre-empting our future medical challenges, with the result that an ever increasing number of adults are taking more than one pill a day – particularly in old age.

As Pharmaceutical Research and Manufacturers of America (PhRMA) put it in a recent statement: “as we learn more about disease, prescription medicines are justifiably playing an increasingly important role”. Hence, with new drugs come new opportunities. But just how dependent on prescriptions medicines have Americans become?

According to a recent study by researchers at the U.S. Centre for Disease Control and Prevention (CDC), the use of prescription drugs by the average American has grown considerably over the past decade. Specifically, while the number of Americans taking at least one prescription drug increased by 10%, those making use of multiple medications grew by 20%. And while the growth in these figures might seem reasonable - if not small over this period - the number of people taking five or more drugs a day increased by an astonishing 70% in the previous ten years leading up to this survey. All things considered, that means that today, 48.3% of Americans take at least one prescription medicine. And the number is still rising.

Viewed in demographic terms, results from the National Health and Nutrition Examination Survey (NHANES) also showed that while women were more likely to take prescription drugs than men, rates of use were considerably higher amongst white Americans than they were amongst black and Mexican Americans. In terms of cost, spending on prescription drugs in the U.S. more than doubled over the period 1999-2008. Those medications most commonly prescribed across the period ranged from asthma medicines for children, antidepressants for middle-aged adults, and cholesterol lowering drugs for those Americans over 60.

Turning to the future, what could the recent introduction of sweeping healthcare reform in the U.S. mean for rates of prescription drug use in the years to come? Without standing as the most faultless piece of legislation to ever pass the Congress, the Patient Protection and Affordable Care Act has achieved a number of important goals. More than 70 years later, and after numerous attempts at reform by Presidents ranging from Harry Truman to Bill Clinton, it is now illegal for insurance companies to deny a person coverage on the basis of a pre-existing condition. Women now enjoy parity with men on pricing and coverage options have been extended to a further 48 million Americans. And yet, for all that healthcare reform has achieved in terms of broad progress, new challenges are now emerging from its shadows.

Ever since its very introduction, Republicans and other critics of reform have been warning of the additional stresses and strains that these changes will place on infrastructure. In other words, as more and more people gain insurance and start making use of the nation’s hospitals and services, additional pressures will be placed on almost every part of the system. Now, and as these results from the CDC show, prescription drug use in the U.S. is rising with considerable velocity. Unsurprisingly researchers at the CDC found a strong and tangible link between access to healthcare insurance and the use of prescription medications. Specifically, while those Americans with healthcare insurance had a prescription rate of 52.8%, only 28.5% of those without any form of coverage were likely to have used a prescription drug in the last month. By an alternative measure, those with access to a regular place for healthcare were over 2.7 times more likely to use prescriptions medicines than those without.

Whichever way you look at it, and to quote the CDC directly: “Those without a regular place for health care, health insurance, or prescription drug benefits had lower prescription drug use rates. Lack of access to medicines may impact health and quality of life, as prescription drugs are essential to treat acute and chronic diseases”. And while these results should broadly offer additional reason to be thankful for reform and the healthcare benefits that it will bring to tens of millions of Americans, it would be wishful thinking to imagine that this won’t have any influence on costs in the long-term.

Yet finally, and perhaps of even greater importance, some worry that by further increasing the rates of prescription drug use, healthcare reform will cause additional challenges in the area of prescription drug abuse. Of course, that’s not a reason for resisting reform, but simply a statement of reality. According to a recent report by Reuters, over the past decade there has been an almost 400% increase in the number of Americans treated for prescription drug abuse. Perhaps even more surprisingly, that means that behind marijuana, ‘abuse of prescription pain medication was the second most common type of illicit drug use in the United States in 2008, according to SAMHSA’. And with experts pointing to availability as one of the key causes of the upward trend, changes under the recent reforms will doubtless catalyze those worries in the years to come.