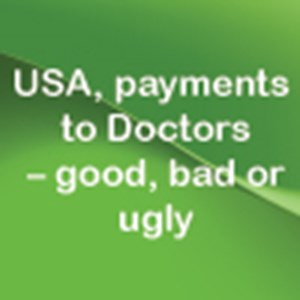 At what point does a conflict of interests occur? Last year – and for many years before that – U.S. drugs companies paid out tens of millions of dollars in payments and gifts to physicians and academics. Earlier this year, the Pharmaceutical and Research Manufacturers of America (PhRMA) released a revised, and somewhat toughened, code of practice.
Last Updated: 27-Aug-2010

At what point does a conflict of interests occur? Last year – and for many years before that – U.S. drugs companies paid out tens of millions of dollars in payments and gifts to physicians and academics. Earlier this year, the Pharmaceutical and Research Manufacturers of America (PhRMA) released a revised, and somewhat toughened, code of practice. Their attempts to target the flow of payments and gifts to doctors has resulted in a greater degree of transparency and an increased sense of public awareness. Since then, pharmaceutical companies have began to publicly disclose the payments they make to physicians and other healthcare professionals. The figures make for interesting reading.


To provide just a few examples of the kinds of figures involved: in the first quarter of 2009, Eli Lilly, the first drugs company to voluntarily disclose their payments, reported fees of over $22 million nationwide. Merck, the second company to do so, reported speakers fees of around $3.7m. Many other drugs companies have since followed suit. Andrew Witty, CEO of British drugs maker GlaxoSmithKline, has gone one step further, by instituting a cap on payments to physicians and academics of $150,000 per individual per year. In announcing the decision, Mr. Witty said: “It’s appropriate that we have a limit on what we pay”, adding that these rules will function “without exception”. According to a recent report by the New York Times, national advocacy groups are also reaping the benefits of drugs company donations. The National Alliance on Mental Illness, for instance received nearly $23 million in donations between 2006 and 2008. U.S. Senator, Chuck Grassley of Iowa, praised NAMI for being one of the first such groups to disclose its list of benefactors, adding that “It’d be good for the system for other patient groups to do what NAMI has done”.


On one side, there is the obvious argument that payments by drug companies directly to physicians represent an obvious conflict of interest and that they do little to encourage public confidence in an industry already plagued by low levels of popular approval. Another school of thought however, suggests that doctors require ‘speaking fees’ to make up for the lost revenues of being away from their patients. While there is clearly a degree of logic to this argument, there are also several clear flaws. First, when one considers the amount of money that most leading physicians make, it is hard to sympathize with the argument that a day away from their patients would lead to anything like financial disrepair. One also has to question the proportionality of the payments in question. Do a few lost hours really equate to yearly payments sometimes breaching $100,000? Do fees of even ten, twenty or even thirty thousand dollars really represent a mere reimbursement of lost revenues? Or do these payments instead represent a dubious form of commercial influence? Nevertheless, it is important to remember that wherever there is a generous donor, there is always a welcoming recipient. Thus, doctors themselves are not entirely free of responsibility and drugs companies alone are not to blame.

Looking to the future, while it is clear the new PhRMA guidelines have changed the landscape, some worry that current levels of transparency are still not enough and several legislators are looking to do more. Two such legislators are U.S. Senators Chuck Grassley (R-IA) and Herb Kohl (D-WI). In January of this year, they introduced the Physician Payment Sunshine Act to the floor of the Senate and in doing so argued for wider transparency and greater accountability. If passed, drugs companies will be forced to provide the government with yearly reports of all donations exceeding a cumulative value of $100. Addressing the Senate floor, Senator Grassley said: “this bill is not aimed at stopping money from flowing to doctors, but it will throw a little sunshine on the issue and hopefully curb bad behavior”. Yet to pass, the act is now pending a vote in the Senate as part of the 2009 health-care reform bill. Many drugs companies, including Merck, support the legislation.

In the meantime, some States are deciding to act of their own accord. Earlier this year, the U.S. State of Massachusetts enacted what local officials have called the most comprehensive laws against excessive payments in the entire nation – limiting payments and requiring companies to disclose all payments above $50 for the majority of payments.

In announcing the Sunshine Act to the Senate last year, Senator Grassley said:
‘It's no secret that drug and device companies have substantial financial relationships with physicians. In addition to multimillion dollar royalty payments and lucrative consulting contracts, I have found that drug and device companies often provide perks to doctors, such as expensive trips, lavish speaking fees, and other benefits. These relationships can motivate doctors to modify their treatment practices and those practices may not be in the best interest of patients’.