When Should you Turn Down a Pharma Job Promotion? 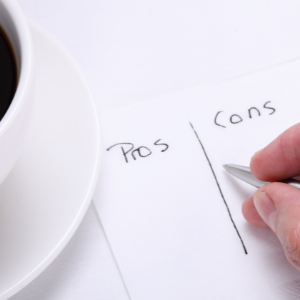 Whilst Pharma job promotions undoubtedly bring with them numerous benefits both personally and professionally, politely declining a promotion is valid if the new role just isn’t going to work for you. In this article, we outline 8 reasons why you may want to turn down a job promotion; addressing some of the main concerns when it comes to making changes in your career, and laying out advice on what you could do before making the decision to say no.
Editor: Lucy Walters Last Updated: 17-Jun-2022

After falling 7.4% in 2020, promotions among professional workers in the US shot up by 9% in 2021, and this increase is also being recognised in job markets across the globe. Whilst many Pharma and Life Science employees are still fighting for the promotions they missed out on during the pandemic, these opportunities aren’t a priority for everyone, particularly after two years of constant change and uncertainty.

Whilst Pharma job promotions undoubtedly bring with them numerous benefits both personally and professionally, politely declining a promotion is valid if the new role just isn’t going to work for you. In this article, we outline 8 reasons why you may want to turn down a job promotion; addressing some of the main concerns when it comes to making changes in your career, and laying out advice on what you could do before making the decision to say no…

Whilst you might be interested in the new role, the timing just may not be right, both in terms of your personal life and career goals. Personally, you might have things going on at home that you need to be present for, and so taking on additional work responsibilities might not be the right move. Professionally, you may be approaching an exciting project in your current role that you’ve been waiting to work on, and the new role might take you away from this.

If you are going to turn down the promotion due to timing, make it clear to your employer that this is the only reason, and that you’d love to be considered for a similar opportunity in the future. Reiterate that you’re committed to the company, and that you can really see your career growing there.

You Don’t Want to Compromise Your Current Work-Life Balance

Often, additional responsibilities may come with extra hours, more travel, and ultimately more time away from home. If you’ve found the ideal work-life balance in your current role, it’s understandable if you don’t want to compromise this.

Before you turn down the new role, speak to people already doing it to get a realistic overview of how much it could impact your home life. It may not be as bad as you think, so get all the information you can before you make the decision. You could also negotiate with your employer on things such as homeworking days and flexible working to maintain a healthy work-life balance in the new role.

You’re Happy Where You Are

Being content in your current role is another valid reason to turn down a promotion, especially if the new job means working with a new team or in a new department. However, remember that your role will naturally evolve along with changing business needs, and that the people you work with won’t stay where they are forever, so your current workplace dynamic isn’t permanent.

If you want to stay where you are for now but still want to be considered for new roles in the future, offer to take on some additional responsibilities to further support your team in other ways, showing willingness to allow your role to evolve without having to leave it entirely.

You may have concerns about your skillset/knowledge not being where it should be for the promotion. However, you need to be sure that this isn’t a case of self-doubt, as 71% of people have turned down a promotion due to lack of confidence alone.

Take a look through the list of your new responsibilities and be honest with yourself about how much you can realistically see yourself doing. If you can see lots of areas you think you’ll struggle with, ask for clarity on the training that would be provided to get you where you need to be, or how you’ll be expected to learn things, as there will always be parts of a role that can only be learnt from doing the job. You could also have an open conversation with your employer to find out what they expect you to bring to the role to have a better understanding of your strengths, and how these can be used in new ways.

You Aren’t Satisfied with the Compensation

39% of employers award promotions without a salary increase, and 64% of workers would accept this. However, putting in additional hours on the same salary just isn’t viable for every employee, and that’s okay.

Before turning down the promotion, do your research on the average salaries in your industry, discipline, location, and with your level of experience to lead a well-researched salary negotiation. Also gather examples of the results you’ve achieved in your current role to demonstrate your value, using data to deliver your worth in business terms.

You’re Concerned About Your Wellbeing

If the promotion comes with additional responsibilities, you may be concerned over how this will impact your wellbeing, for example, increased stress levels, lack of sleep, and more.

Before you turn down the promotion, familiarise yourself with your workplace policies and benefits, ensuring you’re aware of everything your employer can do to support you, and the resources available for you to use at any time. There might be things in your employee benefits package that you’ve never accessed before, so feel free to reach out to your HR team for clarity on how to make the most out of what’s available.

Read our article on How to Look After Your Mental Health at Work for more tips.

The Direction Isn’t Right for You

Not every Pharma employee wants to work in a managerial position, so if your promotion means moving into a managerial role, you may not want to take it. In the Life Science industry, employers are always on the lookout for employees with highly specialised skillsets, so there will always be a place for those who want to move laterally rather than vertically.

Before turning down the promotion, consider the entire career path being offered to you and not just the first step. What could the new role lead you to? How does it fit in with your career plan?

You Don’t Know Enough About the Role

If you work for a smaller organisation where roles are more flexible and unpredictable, of the role you’ve been offered is completely new, you may be hesitant to accept the offer if you don’t know enough about the role.

Ask for a list of responsibilities, an onboarding and training plan, or anything else that will provide clarity on what it is you’d be doing. If you’re still unsure, you could ask to take the role on a trial basis, or to shadow someone else for a short period if the role does exist. You could also browse jobs with the same job title on PharmiWeb.Jobs to get an understanding of some of the most common responsibilities.

If you’re already thinking about applying for a job elsewhere, you may want to stay where you are if you know you’ll be given a good reference, or if you have a specific project coming up that you know would look great on your CV.

If you are thinking about your next career move, you can browse the latest Life Science opportunities on PharmiWeb.Jobs, and create a job alert to hear about the latest roles as soon as they’re posted.