Why is Pharma Aggregation the Future of Traceability? An Inside Story 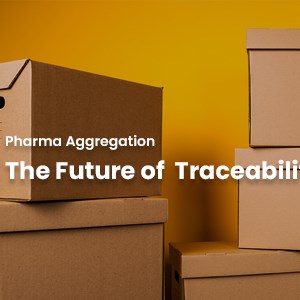 Pharma Aggregation is the new buzz word in pharma serialization, especially when industry experts have realized what packaging-level serialization can do to ensure the integrity of the medicines. Implementing aggregation is the need of the hour because there’s a drastic rise in the counterfeit medicines during the pandemic, posing greater threat to humanity. So, here’s discussing the past, present and the future of pharma aggregation.
Editor: Kaustav Sarkar Last Updated: 25-Nov-2020

DSCSA is changing the dynamics of the pharmaceutical supply chain since its inception. Scripted with the aim of eliminating counterfeit drugs, which comprises 60% of the total medicine circulation in the market, DSCSA is serving more purposes. Merely creating guidelines to be followed by the pharmaceutical stakeholders during the production line of drugs is one thing and getting at the minuscule level to ensure that the loopholes that come with every set of rules is another.

Indeed, decoding the DSCSA regulations is a complex process, which gets even more complicated with time; The recent announcement of postponing the deadline for VRS compliance to 2023 is just a case in point.

What We Have Till Now?

In one of our previous articles ‘Truth or Dare: VRS-compliance deadline pushed from 2020-2023’ we have given details about the reason behind the delay. Practical to a great extent, there’s enough reason why the FDA wanted the deadline pushed. But can we just restrict ourselves in believing that the pandemic alone was responsible for such a big step? Or did it prove to be a trigger point for another underlying challenge that the FDA had previously overlooked?

Now, what makes us say that?

According to an article by the OECD, a growing volume of fake medicines is linked to coronavirus in developing countries. The underlying threat, however, is not restricted to these countries alone, because the medicines that are largely being faked include lifestyle drugs and prescription medicines too, which are highly popular in the United States (a developed country). To add to the woes, even anti-malarial drugs, considered to be a useful drug for COVID in some countries, is also being compromised.

There is no other industry as global as the pharmaceutical industry, generating a combined revenue of $1 trillion worldwide. The supply chain stretches from key manufacturers in India and China, to packaging warehouses in Europe, South America and Asia and to distributors sending medicines to any part of the world.

The counterfeit has ample opportunities to get into the mainstream supply chain, which makes it even more important to protect its integrity at the minuscule level. This brings us to the very point where we had started our discussion. Why the delay?

So, can we attribute it to the minuscule-level verification or Aggregation that the regulatory body felt was the need of the hour?

A step forward from serialization, it is the process of associating uniquely serialized items to higher packaging levels, which also have a unique serial number. Interestingly, the serialized items inside a container are termed as “children” and the container containing these packs are called the “parent”. Say for instance, each unit of hydroxychloroquine has a unique identifier and the entire bunch in the shipment has a top label with a unique serial number. In this case, the bottles of medicines are the children and the carton in which they are stored are the parent.

Now, here’s an interesting twist. It is little known that the concept of aggregation was there since 2018 when DSCSA was already in momentum. So, why has the concept resurfaced now? That, we have already discussed when we spoke about the COVID crisis and its impact on the drug market. What we need to discuss here are the benefits aggregation has.

How does Aggregation Work?

Going by the principle of detection and verification from the initial stage itself, aggregation requires each participant in the supply chain taking over data from its predecessor and supplementing his own identifier on the product, going farther.

Here’s how it is done. Each blister pack when packaged is scanned to store information. The packaging here is labelled the ‘child’. In the next step, several packages are stored in a single container (the parent) and the unique identifiers of the child and the parent are linked. Going farther, several consignments can be linked to a shipping box, which is the next higher-level parent ranking. Each data aggregate is saved in a database before being passed on to the next level of the supply chain.

This way, unique serialization is not restricted to the perimeters of the manufacturers, wholesalers or dispensers, but also include the third-party logistics companies involved in shipping and transportation of the consignments. It is noteworthy to point out here that aggregation serves as a double shield against counterfeit infiltration, which is extremely high during transit.

Some of the biggest pharma supply chains are already halfway through, owing to the huge benefits that aggregation has bestowed while tracking and tracing of products. Some of them being:

Aggregation, on an overall, helps in saving enormous amount of time as it eliminates the necessity to open each batch or container to scan individual ‘child’. Since all the data is easily accessible, tracking products throughout the supply chain becomes smoother and the entire distribution system becomes from efficient, secured and reliable.

Is Aggregation a Mandate?

Let’s face the fact! Neither the DSCSA in the United States nor the Falsified Medicines Directive (FMD) in the European Union mandates the capture or use of aggregation data. But it is recommended, not just because of the reasons and benefits stated above, but also because it strengthens the integrity of the supply chain manifold.

Pharma supply chain stakeholders do realize its importance, which is why there were positive respondents within the range of 50-70% in various surveys conducted on “aggregation-readiness” by Healthcare Distribution Alliance and the Enterprise Systems Partners.

The numbers bring us to our next question: Despite realizing the importance of aggregation complementing the efforts of serialization in the pharma supply chain, why are the stakeholders still hesitant to include it in their processes?

Point is, they are not. The only thing that comes in the way of implementing aggregation are the bottlenecks that come with it. Here’s explaining.

Aggregation Challenges and a Simple Solution

It is not enough to capture aggregation data manually because that demands an increased bandwidth from the stakeholders, in addition to the serialization requirements. Now, that would not be an issue for companies that have already deployed multiscanners and traceability suites and platforms, but those still coping to get the latest technology onboard might find aggregation just a stifling addition to their resources.

The second challenge that is often ignored in these cases is the differences in packaging methodologies. While most of the stakeholders are still getting used to the next-generation serialization methodology, it would be unfair to expect them to use the latest version of aggregation processes. It is pertinent that such instances would only widen the gap between the methodology used by different stakeholders, creating even more confusion and chaos between the two operating systems. In such a situation, all that participants would have to function on in ‘Trust’, which neither guarantees accuracy nor speed.

So, it all bogs down to minimizing the discrepancy and creating accurate aggregation database.

But there is a simple way out, as proposed by Dirk Rodgers in his article ‘Pharma Aggregation: How Companies are Achieving Perfection Today’. The use of RFID and AR-empowered technology should be optimized. Pharmaceutical machine providers like TrackTraceRX can come to the rescue in such cases. From Traceability Suites during the VRS process to insta-verification software and multiscanners, there are many advanced ways of getting packages verified at all the levels of a pharmaceutical supply chain. When it comes to unit-level aggregation too, these technologies just enhance the speed at which the ‘parent-child’ is maintained, thus speeding up the entire process by 10 times, something that leaves you with a lot of time for more productive work even after submitting the FDA forms for audit.

Aggregation in the drug supply chain does not leave anything to your imagination, only if you choose to understand its fundamentals and realize its benefits. Agree or not, aggregation is the future of traceability, which would reach the level of indispensability by 2023 even if it is not a mandate.

So, stakeholders, there’s hardly any time to relax. ‘Aggregate’ the future of medicine tracking and tracing as soon as you can!