The increasing incidence of obesity, leading to significant demand for obesity surgeries, growing awareness toward bariatric surgeries, and dynamic lifestyle are some of the major factors driving the growth of the obesity/bariatric surgery devices market. In 2016, the market generated a revenue of $1.4 billion, and it is predicted to attain a size of $2.8 billion by 2023, progressing at a CAGR of 9.9% during 2017–2023 (forecast period). Obesity surgery devices are medical equipment used in bariatric surgeries for the treatment of obesity.

Based on procedure, the obesity/bariatric surgery devices market is bifurcated into non-invasive and minimally invasive surgery. Of these, in 2016, the minimally invasive bifurcation dominated the market in terms of revenue, and it is expected to maintain its dominance during the forecast period. This is attributed to the fact that the demand for these surgeries is increasing, owing to their lower cost and no radiation involvement compared to other surgeries. However, the non-invasive surgery bifurcation is predicted to witness faster growth, at a 17.1% CAGR, during the 2017–2023 period.

Request to Get the Sample Pages at:

The surging prevalence of obesity around the world is boosting the obesity/bariatric surgery devices market advance. As per the World Health Organization, in 2014, there were 1.9 billion adults aged 18 years or above, who were overweight, out of which 650.0 million were obese. In addition, there were 41.0 million children under the age of five, who were obese or overweight in 2014. The rate of mortality among the obese population is higher compared to the underweight population.

Many companies across the globe are organizing obesity awareness programs to educate people about the various treatment options available, such as bariatric surgeries, which, in turn, is accelerating the growth of the obesity/bariatric surgery devices market. For instance, the Obesity Action Coalition (OAC), a non-profit organization, organizes programs to spread awareness related to the prevention as well as treatment of obesity and offers evidence-based education. There have been instances of various popular personalities going for body transformation through bariatric surgery, such as Ralphie May, Diego Maradona, and Randy Jackson.

Hence, the surging prevalence of obesity, rising awareness on bariatric surgeries, and increasing usage of gastric balloons are being witnessed as the key drivers for the market growth. 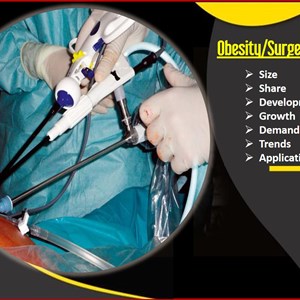