Switzerland’s Galenica Group has redesigned its consumer healthcare business under a new umbrella brand that encompasses a diverse portfolio of OTC products.

The OTCToolbox CHi Award for European Launch of the Year goes to VERFORA, which was accompanied by the brand and communications consultancy Creative Leap.

When Galenica changed the company structure and made an IPO in early 2017, the Swiss group’s consumer healthcare business faced a challenge. Vifor Consumer Health was no longer part of Vifor Pharma but was transferred to the new Galenica and needed a new name.

A year later, Galenica revealed the consumer healthcare business would be called VERFORA. The new name would clearly signal to the market that Vifor Consumer Health was no longer part of the Vifor Pharma Group, explained Galenica at the time.

The branding of the new name was created by the brand and communications consultancy Creative Leap, which is part of the Ceuta Group.

One of the judges for this CHi Award was impressed with the way VERFORA has tapped into the heritage of Vifor Consumer Health whilst at the same time creating a fresh, modern and healthy brand.

Another judge remarked that “reinventing the company image and product portfolio was no mean feat”.

Creative Leap was tasked with creating a new umbrella brand capable of holding together a diverse portfolio of OTC products.

The first step was coming up with a new name. Creative Leap and the client were both convinced that VERFORA was “sufficiently tied to the genesis of the brand to ensure consistency whilst also having a sense of uniqueness and suitability for a consumer audience”.

VERFORA comes from the Latin words veritas, which means truth, and forum, which is associated with the open exchange of ideas. The name “signals scientific provenance and trustworthiness to consumers and healthcare professionals”, explains Creative Leap, “whilst communicating dialogue to its internal stakeholders”.

The next stage was developing a visual identity for the name. Research has shown the letter V “tied together the old and the new” and appeared to be seen as a “checkmark to appeal to both consumers and healthcare professionals”.

Creative Leap says the “basic layout and information architecture of the packs remained similar to the original design, but we applied the new branding – complete with the brand mark and revised V graphic – to the full portfolio of 140 stock-keeping units”.

The consultancy adds that several new ranges have been developed under the VERFORA brand including food supplements, medical devices, and mother & baby products. 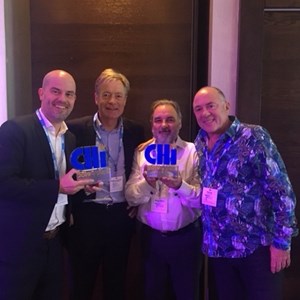