In 2015, 8.5% of the total population was aged 65 years or above, and the percentage is predicted to reach 17% by 2050, as per the National Institutes of Health. Elderly people are more susceptible to diseases, including diabetes and other chronic diseases, as they have weakened body functions. In addition to this, skin changes that occur due to aging further lead to an increased risk of wounds and damage to the skin. The wound healing process is slower in aged people in comparison to adults, because of slower collagen replacement, age-related diseases, and reduced skin elasticity. Hence, to ensure proper healing of wounds in aged people, advanced wound care techniques, such as negative pressure wound therapy (NPWT), are being implemented.

Also known as vacuum-assisted wound closure, NPWT refers to wound dressing systems that apply sub-atmospheric pressure, continuously or intermittently, to the surface of the wound. The technique is used for the treatment of acute and chronic wounds and second and third-degree burns. The global NPWT devices market generated revenue of $2,057.1 million in 2018 and is predicted to register a CAGR of 6.6% in the coming years. Conventional and single-use are the two types of NPWT devices, while accessories are used as an interface between the patient’s wound and an NPWT device. The conventional type consists of a suction pump that generates a negative pressure, a canister that collects the exudates from the wound, and a variety of wound dressing kits. Single-use NPWT devices are portable and comprise the negative pressure-generating suction pump and two sterile dressings. While conventional NPWT devices generated more revenue during 2014–2018, more units were sold of the single-use NPWT devices during the same period.

Request to Get the Sample Pages at:   https://www.psmarketresearch.com/market-analysis/negative-pressure-wound-therapy-market/report-sample

The preference toward advanced wound therapies is increasing rapidly, which is further leading to the rising demand for NPWT devices. Traditional wound care products provide dry healing when they are used for primary dressing or act as a secondary dressing for holding the primary dressing in place. In any case, the wound healing process is slower than with the use of advanced wound care therapies, which ensure quick patient recovery by accelerating the healing process. Furthermore, there are numerous articles which support NPWT as a better wound care therapy. Take for instance, the article published on the National Center for Biotechnology Information (NCBI) in 2018, which stated that NPWT is a highly beneficial therapy for the treatment of wounds, as it enhances collagen and protein production along with diminishing bacterial colonization.

While developed countries, such as Canada, Italy, Germany, and the U.S., have low incidents of traumatic wounds due to the presence of better preventive methods and emergency services, developing countries, including Bangladesh, Sri Lanka, India, and Kenya, are still lagging behind in the implementation of such measures. Because of the lack of better medical facilities, fire alarms, fire management, and other such measures and services, the population of emerging economies is more prone to severe wounds caused due to fire. For this reason, the requirement for NPWT devices in these countries is predicted to increase considerably in the coming years. 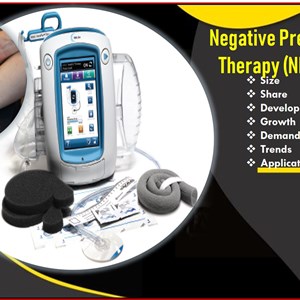