WATERTOWN, Mass., Jan. 15, 2020 /PRNewswire/ -- Windgap Medical, Inc. and the University of Minnesota Twin Cities have received a $3.2 million grant from the National Institutes of Health (NIH) to develop a new device to quickly administer a recently developed antidote for cyanide poisoning.

Under the grant, researchers from the University's Center for Drug Design, College of Pharmacy, and Massachusetts-based pharmaceutical company Windgap Medical are collaborating to design an autoinjector. The collaboration's goal is to develop a valuable tool for first responders to use in saving victims of cyanide poisoning. The five-year grant comes from the NIH's CounterACT program, which aims to prepare countermeasures against chemical threats that have the potential to be used as weapons.

"The risk of cyanide use in a terrorist attack is such that the U.S. Department of Homeland Security identifies cyanide among the highest priority chemical threats," said Steven Patterson, a professor in the Center for Drug Design. "Current antidotes are not well-suited for use in a mass-casualty setting. We have long recognized that a device to deliver a cyanide antidote as rapidly and easily as epinephrine would be extremely useful. It is clear that Windgap has the technology to develop such a device."

Windgap will design the autoinjector to fit the specific dosing characteristics needed for sulfanegen. This will involve a dual-chamber (wet/dry) autoinjector design to ensure the powdered drug remains dry and shelf-stable while being easy for first responders to reconstitute and administer to victims in the field.

"Windgap is excited to be working with Dr. Patterson, an authority on cyanide toxicology and antidote development, with a history of success in drug design," said Adam Standley, vice president of R&D at Windgap. "This collaboration is a case study in the innovation that is catalyzed by academic-industry teaming, supported by CounterACT. Here we have a promising drug and an innovative delivery technology coming together to form an elegant solution, addressing a largely unmet need. We look forward to developing and commercializing this product for both defense and civilian use with Dr. Patterson and the team at the University of Minnesota."

In addition to terrorist attacks, toxic levels of cyanide exposure can also come from building fires and industrial accidents. The chemical kills cells in the body by preventing them from using oxygen. Symptoms of toxic exposure, which can develop within minutes, include convulsions, loss of consciousness, and possibly death, according to the Centers for Disease Control and Prevention. Those who survive cyanide poisoning are at risk for a severe neurological disorder similar to Parkinson's disease.

The work to develop a fast-acting, easy-to-administer autoinjector formulation will be based on an antidote called sulfanegen, which was recently developed and refined by Patterson as well as College of Pharmacy colleagues Robert Vince, director of the Center for Drug Design, and Herbert Nagasawa, adjunct professor. The formulation was patented with assistance from U of M Technology Commercialization.

Sulfanegen takes effect in less than three minutes, rapidly converting cyanide in the body into a less toxic compound. An autoinjector would deliver a single, preloaded dose of this antidote when pressed against the body, requiring much less time to administer than the current industry-standard cyanide treatment, which requires a person to be connected to an IV for 15 minutes. A faster treatment option during mass-exposure incidents, such as terrorist attacks or building fires, could allow first responders to save more lives before victims succumb to their exposure. 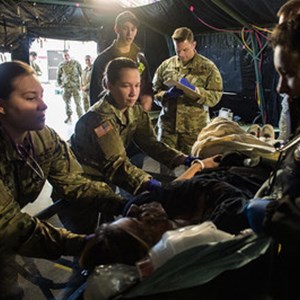