·     Across all technology sectors the EPO received a record 181 000 patent applications from around the world, demonstrating the economic value of patent protection and the attractiveness of the European market

Munich, 12 March 2020 – Statistics published today by the European Patent Office (EPO) show that the number of patents filed by companies and researchers in the life sciences sectors has grown over the past year. According to the EPO Patent Index 2019, the pharmaceutical and biotechnology fields both saw an increase in the number of patent applications, rising by 4.4% and 1.7% respectively over 2018, their third consecutive year of growth.

“The steady growth of patent applications in biotechnology and pharmaceuticals demonstrates that Europe is an environment in which first-class innovation in the life sciences can flourish,” said EPO President António Campinos. “Through our robust and thorough patenting system, the EPO supports companies and inventors so that they can continue to develop inventions that improve both health and quality of life.”

Across all fields of technology, the EPO received a record 181 000 patent applications in 2019, a 4% increase on 2018. This year’s index was particularly marked by a sharp increase in patenting activity in digital technologies, with applications in the fields of digital communication and computer technology showing the steepest growth (+19.6% and +10.2% respectively), highlighting their key role in driving the digital transformation that is permeating all sectors and industries. The top three fields of technology at the EPO were digital communication, medical technology and computer technology. Pharmaceuticals was the seventh largest field at the EPO (7 697 applications), and biotechnology the eighth (6 801 applications) (Graph: Technical fields with most applications).

Growth in patent applications at the EPO in life sciences: 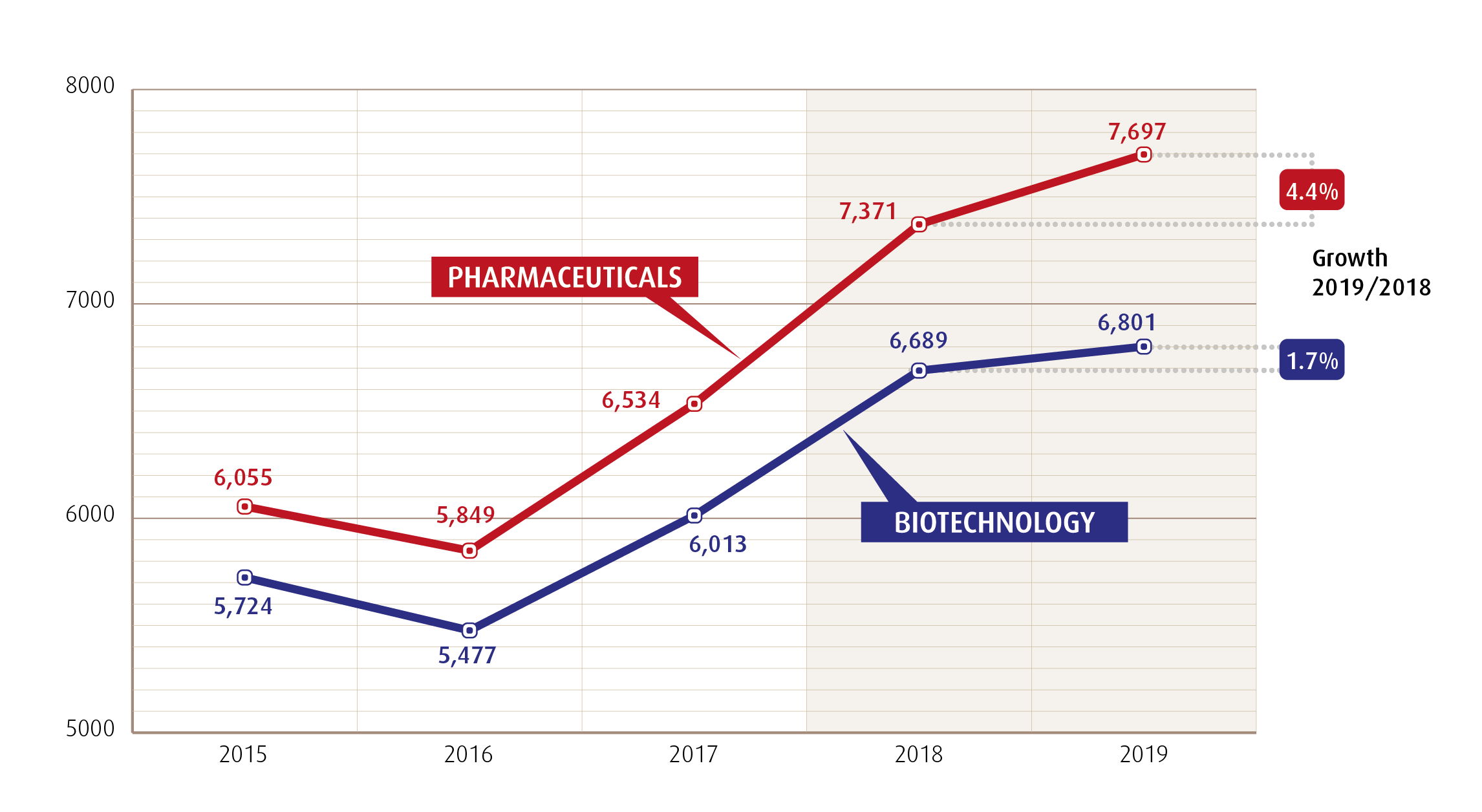 The 2019 index also underlines the attractiveness of the European market to small and medium-sized enterprises (SMEs). An analysis of the patent applications originating from European countries shows that every fifth application comes from an SME, which demonstrates that patent protection is of importance to smaller organisations and individual inventors, too (Graph: Breakdown of applicants by category).

European companies maintain lead, despite strong growth from US and Asia

European innovators continued to lead in filing for life science-related patents in their own market, with 41% of all applications in pharmaceuticals at the EPO in 2019 originating from the EPO member states, and a growth rate of 2.5% over 2018. The US was close behind with a 39% share of pharmaceutical patent applications, and a stronger growth rate of 14.1%. Japan had a 5% share, while China and the Republic of Korea each accounted for 3%.

In biotechnology European firms had a strong lead, accounting for 47% of all applications at the EPO, with the US making up 32%. Continuing a trend from 2018, patent applications from Asian companies in the biotechnology industry have continued to rise dramatically. China (+63.5%), the Republic of Korea (+47.8%) and Japan (+19.3%) all saw steep growth. Despite the countries’ relatively low patenting volumes (Japan’s share of 8%, China’s 4% and the Republic of Korea’s 3%), the increase is indicative of the growing presence of Asian companies and inventors in the biotechnology area.

The top applicants at the EPO in the life sciences have maintained their top spots, with the French Institut National de la Santé et de la Recherche Médicale (INSERM) and Swiss firm Hoffmann-La Roche remaining at the top of the pharmaceuticals and biotechnology sectors respectively.

Leading the pharmaceutical sector for a second year, INSERM filed 93 pharmaceutical-related patent applications with the EPO in 2019. The second and third places also remain unchanged, with Novartis in second place (88 applications) and Merck & Co in third (84 applications).

In the biotechnology sector, Hoffmann-La Roche led with 226 applications and Dutch nutrition multinational DSM again in second place (112 applications). With 91 applications in 2019, INSERM moved up to third place.