The UK population has immense pride in the NHS

People in the UK are incredibly proud of their healthcare system – particularly in the wake of the coronavirus crisis.

British appreciation of their health service is the highest in Europe, with many having a far greater appreciation for the work of doctors and nurses than before the pandemic.

These are among the key findings of the STADA Health Report 2020, a detailed study of attitudes to healthcare throughout the UK and Europe. 2,010 people aged between 18 and 99 in the UK were among 24,087 respondents from 12 European countries who shared their opinion on health-related topics during February and March. A further 6,269 throughout Europe, including 1,042 UK adults, were questioned about the coronavirus outbreak in late April.

Market research institute Kantar Health conducted research in the UK, Austria, Belgium, Finland, France, Germany, Italy, Poland, Russia, Serbia, Spain and Switzerland – on behalf of STADA Arzneimittel AG, the global healthcare leader which operates in 120 countries employing more than 10,000 people. STADA’s UK arm, alongside Britannia and Natures Aid, is Yorkshire-based Thornton & Ross, one of the largest over the counter pharmaceutical manufacturers in the UK and the firm behind big brands like Covonia®, Cetraben®, Hedrin®, Savlon® and Zoflora®.

Asked to rate Britain’s health care system, three-quarters said they were very positive or positive about the care available. Just 7% expressed a negative opinion, compared with 15% before the pandemic.

Our appreciation is the highest in Europe at 67%, closely followed by Spain (65%), both of which are considerably higher than the global average of 46%. Before the pandemic, the UK was ranked sixth out of 12 European countries on satisfaction.

People in this country are more worried about the possibility that someone they know could die from coronavirus than catching and dying from it themselves, with over half identifying this as a major concern, compared with 39% who feared becoming infected. A third are concerned that a Covid-19 vaccine had still not been found.

Attitudes towards online consultations are also changing. A quarter of UK residents are now more likely to imagine consulting a doctor online – particularly those aged over 50, who have traditionally been more resistant to digital medicine. Even before the pandemic, the number of those willing to consider digital diagnosis was increasing, with one in six using more online sources to find health advice.

Around half of UK respondents (47%) said they now had much greater appreciation for the work of doctors and nurses as a result of the pandemic, with a quarter being more aware of the importance of good medicine. A fifth of younger people said in future they would keep their medical cabinet well stocked. A further 25% were now more appreciative of the role of the pharmaceutical industry.

People are divided over the impact of the virus on the rest of 2020. Some feel there will be a swift return to normality (15%) and more than a quarter believe positive consequences such as looking out for one another will be a lasting legacy; however, a third fear a deep financial crisis. Men are more optimistic than their female counterparts but only 31% of those the UK are ‘relatively pessimistic’ – despite the UK having a high death rate – compared with 40% of Germans, Spaniards and Italians.

Other key findings outlined in the health report include:

Roger Scarlett-Smith, Executive Vice President of Thornton & Ross, said: “It comes as no huge surprise that this study shows the very deep gratitude that the people of the UK have for the NHS, particularly in the wake of the coronavirus pandemic.

“It is clear that the future of healthcare will be significantly impacted as a result of the outbreak, illustrated by the distinct shift in attitude towards online consultations despite reservations about data security. This step change in people’s acceptance of digital medical interactions, is very much in line with the trends we are seeing in e-commerce and in consumers taking responsibility for self-care.

“The insight this report provides will play an essential role in enabling us to understand people’s concerns and wishes, ensuring we continue to be at the forefront across the healthcare spectrum, from consumer healthcare products to cancer medicine.” 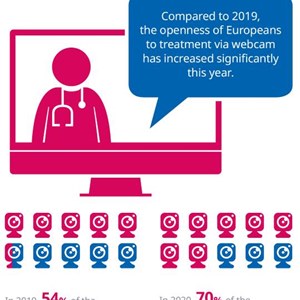