"The current study results are encouraging, as they suggest a clinically meaningful signal of effect. A further randomized, parallel-controlled, clinical trial is needed to confirm these positive effects of AstroRx® in the treatment of ALS," said Dr. Marc Gotkine, Department of Neurology at Hadassah Medical Center, Jerusalem and the Principal Investigator of the Phase 1/2a clinical trial of AstroRx®.

Kadimastem CEO Rami Epstein said, "We are excited by the positive and consistent clinical results, demonstrating both the good safety profile and therapeutic effect of AstroRx®. The comparison between the ALSFRS-R change before and after treatment convey a clinically meaningful decline of more than 50% in disease progression rate for a period of 3 months for both cohorts. The effect was even more profound in patients who deteriorate rapidly. Repeated administrations of the treatment, planned to be assessed in future clinical trials, will hopefully extend the duration of the beneficial effect. These results strengthen our commitment to bringing an innovative therapeutic treatment to ALS, a devastating disease currently having no effective treatment."

Earlier this year, due to COVID-19, the Data Safety Monitoring Board (DSMB) of the Phase 1/2a clinical trial recommended to put additional cohorts on hold to ensure the safety and well-being of the patients. Considering the ongoing situation presented by COVID-19 in Israel, the uncertainty and setbacks imposed, the Company decided to not pursue the additional cohorts of the current Phase 1/2a clinical trial.

"The positive interim results of Cohort A and B strongly support our next global clinical development stages. We are now focused on advancing strategic FDA regulatory processes that will necessitate the conduct of global multi-center clinical trials. In support, the Company is also dedicating resources to production process scale-up as well as to the development of a 2nd generation of AstroRx® as a frozen product that will accelerate our clinical development plan to support market authorization," added Epstein.

To support these strategic processes, several senior managers with proven experience in leading such global processes have been appointed, including Dasy Mandel as Director of Business Development, Veronique Bellaiche as Director of Regulatory, and most recently Dr. Ruti Alon as the new Chairperson.

Professor Michel Revel, Kadimastem Founder and CSO added, "The strategic plan will benefit the patients and support the efforts of the medical community striving to bring a solution to this devastating disease. We value the contribution of the patients who volunteered to participate in our trial, as well as the physicians and clinical team at Hadassah Medical Center and look forward to continuing our collaboration during the next stages of global clinical trials."

The Phase 1/2a trial is an open label, dose-escalating, clinical study to evaluate the safety, tolerability and preliminary efficacy of AstroRx® cells in patients with ALS. The primary objectives of the trial were safety evaluation and tolerability of a single administration of allogeneic astrocytes derived from human Embryonic Stem Cells (hESC), administered in escalating doses. The secondary objective was to evaluate the efficacy, including ALS Functional Rating Scale-Revised (ALSFRS-R), the gold standard scale to assess ALS progression by monitoring patient muscle functions over time.

Similarly to Cohort A, no treatment-related serious adverse events nor dose-limiting toxicities were reported and the treatment was well tolerated in the higher cell dose.

To identify decline in disease progression following treatment, ALSFRS-R slope analysis was performed and compared between the pre- and post-treatment periods. The starting point for the slope of the post-treatment period was referred to in the slope analysis in two ways: at first visit after treatment (Day 30, as previously published for Cohort A) and before treatment administration (Day -1). Both analyses were conducted.

The final results of the 6-month follow-up post-treatment for Cohort B are expected in Q4 2020.

The Company's technology enables the injection of AstroRx® cells into the cerebrospinal cord fluid (CSF) of patients using a standard lumbar puncture procedure. The goal is to support the malfunctioning cells in the brain and spinal cord of patients suffering from Amyotrophic Lateral Sclerosis (ALS), in order to slow the progression of the disease, improve quality of life and extend life expectancy for these patients. AstroRx® has been granted orphan drug designation by the FDA for the treatment of ALS.

AstroRx® has shown to be safe and effective in preclinical trials and is now being further assessed in a Phase 1/2a open label clinical trial at Hadassah Medical Center, Ein-Kerem, Israel. The objective of the trial is to evaluate the safety, tolerability, and efficacy of escalating doses of AstroRx® cells in patients with ALS. Treatment is administered in addition to the appropriate standard-of-care.

Scientific literature indicates that astrocyte cells play a substantial role in supporting malfunctioning cells also in other neurodegenerative diseases, in addition to ALS. Accordingly, the Company is also evaluating other potential applications of the AstroRx® cell product.

Amyotrophic Lateral Sclerosis (ALS) is a rapidly progressive fatal neurodegenerative disease causing dysfunction in the upper and lower motor nerves that control muscle function. ALS leads to muscle weakness, loss of motor function, paralysis, breathing problems, and eventually death. The average life expectancy of ALS patients is 2-5 years. According to the ALS Therapy Development Institute, it is estimated that there are approximately 450,000 ALS patients worldwide of which 30,000 reside in the US. According to the ALS Foundation for Life, the annual average healthcare costs of an ALS patient in the US are estimated at US$ 200,000. Thus, the annual healthcare costs of ALS patients in the US alone amount to US$ 6 Billion.

Kadimastem is a clinical stage cell therapy company, developing and manufacturing "off-the-shelf," allogeneic, proprietary cell products based on its technology platform for the expansion and differentiation of Human Embryonic Stem Cells (hESCs) into functional cells. AstroRx®, the Company's lead product, is an astrocyte cell therapy for the treatment of ALS, currently undergoing a Phase 1/2a clinical trial. IsletRx is the Company's second product in development. IsletRx is comprised of functional pancreatic islet cells intended to treat patients with insulin dependent diabetes. IsletRx demonstrated safety and efficacy in a proof of concept preclinical study. Kadimastem was founded by Professor Michel Revel, CSO of the Company and Professor Emeritus of Molecular Genetics at the Weizmann Institute of Science. Professor Revel received the Israel Prize for the invention and development of Rebif®, a multiple sclerosis blockbuster drug sold worldwide. Kadimastem is traded on the Tel Aviv Stock Exchange (TASE: KDST). 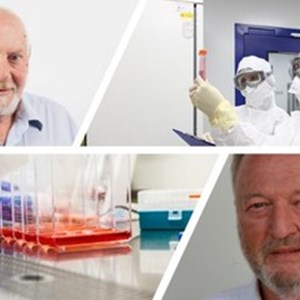