Benefits offered by robotic systems in pharmaceutical manufacturing is a key factor driving the growth of pharmaceutical robots market. The base year considered for the study is 2015, and the forecast has been provided for the period between 2016 and 2021.

On the other hand, emerging countries such as India and China providing lucrative opportunities for players operating in this segment. However, the high cost of tools is expected to hamper the market growth to a certain extent during the forecast period.

What Drives the Pharmaceutical Robots Market?

The growth of the global market Pharmaceutical Robots Market is primarily influenced by the following factors:

A robotic system is a type of automation that has multiple axes of motion and can be programmed to perform a function. Some of the benefits of automation include efficiency, saving workers from hazardous environments or repetitive tasks, reducing training overhead, eliminating human error, increasing repeatability and reproducibility, and in cleanrooms, removing the potential for human contamination.

The pharmaceutical robotic systems market in APAC is expected to grow at the highest CAGR during the forecast period owing to factors such as the increase in domestic industrial robots companies, flourishing pharmaceutical industry, increasing number of conferences and exhibitions, investments and funding in the industrial robots industry, and Japan’s Robot Strategy.

To speak to our analyst for a discussion on the above findings, click Speak to Analyst 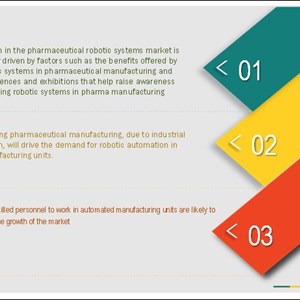