SAN FRANCISCO, Aug. 21, 2020 /PRNewswire/ -- When news about a novel coronavirus switched from a chronicle of its progress in China to headlines about a worldwide COVID-19 pandemic, Gladstone Institutes scientist Nadia Roan, PhD, was in the midst of publishing several papers on T cells and their role in HIV spread and long-lasting infections.

Aside from serving as HIV targets and hideouts, T cells are an important part of the body's immune response against many viruses. They are also the cell type that is most evidently depleted in severe cases of COVID-19. Roan decided to apply her expertise in T cells to understanding how people respond to SARS-CoV-2, the virus that causes COVID-19.

Now, Roan and her team have catalogued the T cells of people who have recovered from mild cases of COVID-19. Their analysis, published in Cell Reports Medicine, sheds light on what a successful immune response to SARS-CoV-2 might entail, and has implications for vaccine development.

Much of the body's fight against viruses or other pathogens is carried out by antibodies, which latch onto specific molecules on the surface of pathogens and mark them for destruction. But antibodies against SARS-CoV-2 appear to wane rapidly after an infection, which raises the concern that their protective effect might be short-lived.

"Most studies on host immunity to SARS-CoV-2 have focused on the antibody response," says Roan, who is also an associate professor of urology at UC San Francisco. "However, other studies also suggest that SARS-CoV-2 can elicit a strong T cell response."

Therefore, an important question is whether SARS-CoV-2 infection activates T cells that are long-lived and could confer long-term immunity against the virus. Another question is whether the T cell response could explain why some people recover from infection after only minor ailments while others succumb to protracted illness sometimes ending in death.

To answer these questions, Roan and her team obtained blood samples from nine donors who had recovered from a confirmed SARS-CoV-2 infection after having experienced only mild symptoms.

"We reasoned that these patients would have immune systems that are particularly good at eliminating the virus," says Roan.

Roan's group used a technique called CyTOF, which characterizes T cells according to the proteins they contain or carry on their surface. Different combinations of proteins dictate the different roles T cells play in an infection, and can be used as markers to identify the types of T cells present in a person's blood. Because CyTOF can track nearly 40 different protein markers at once, the researchers can detect many different characteristics in any given cell.

"Knowing the characteristics of SARS-CoV-2 specific T cells is important to inform us of their functional properties, including their ability to persist long-term in convalescent individuals," says Roan.

T cells come in two main flavors: CD4+ T cells, whose main role is to stimulate the overall immune system's response to an invader, and CD8+ T cells, many of which kill infected cells. Within these broad categories, CyTOF can distinguish many more subcategories. For instance, it can tell short-lived from long-lived cells, and "effector" T cells, cells that fight a current infection, from "memory" T cells, the persisting cells that help mount a quicker response to the next round of infection.

T cells recognize small pieces of pathogen proteins that are displayed on the surface of infected cells. To ensure they were looking at the patients' response to SARS-CoV-2 infection, Roan's team selected T cells specific to the virus's proteins. For comparison, they also examined T cells specific to other viruses, such as the flu and cytomegalovirus, a common pathogen to which many individuals have previously been exposed.

After subjecting the patients' samples to CyTOF, Roan's team discovered intriguing patterns in the SARS-CoV-2-specific T cells that may explain how these patients recovered from COVID-19.

First, the patients' CD4+ T cells specific to SARS-CoV-2 belong to a category called "Th1" known to effectively fight viruses, and not to categories associated with other types of inflammation that are less effective against viruses and can lead to immune-mediated pathology. This could help explain the patients' recovery, given that, in contrast, severe COVID-19 cases are characterized with uncontrolled inflammation and tissue damage.

Second, the CD4+ T cells in the samples are mostly "memory" and "helper" T cells, which stimulate the production of pathogen-specific antibodies. The SARS-CoV-2 specific helper T cells found in convalescent patients presumably helped them mount an effective and specific antibody defense against the virus.

Third, the patients' CD8+ T cells belonged to a subcategory known to protect against various other viruses. Roan and her group speculate that these cells are toxic to infected cells, long-lived, and able to proliferate quickly—properties that would allow them to eliminate SARS-CoV-2 infected cells efficiently, thus preventing the virus from building up after infection.

Interestingly, a large proportion of the T cells specific to SARS-CoV-2 carried a surface protein that is known to mark long-lived T cells. Indeed, these cells were found in convalescents more than 2 months after infection. Roan's team cultured these cells in the presence of a common T cell growth factor currently being tested as a way to improve clinical outcomes for COVID-19 patients with a depleted store of T cells. The cells markedly increased in numbers, demonstrating a powerful ability to proliferate.

"These results suggest that SARS-CoV-2 specific T cells are not only long-lived, but can be maintained by constant proliferation. Therefore, they can presumably fight off a new infection long after the first one has cleared," says Roan.

Studies involving a larger number of patients, including those who suffered severe illness, will be needed to understand why different people respond so differently to SARS-CoV-2 infection. Roan and her team have already begun comparing T cell responses in mild vs. severe cases, and will investigate the possibility that prior exposure to other coronaviruses might boost a person's immune response to the new virus.

"Our findings suggest that while antibodies against SARS-CoV-2 may fade relatively quickly, long-term immunity to the virus may be generated in the form of memory responses, including that of memory T cells," says Roan. "To confer lasting and effective immunity against COVID-19, vaccination strategies should strongly consider approaches that, in addition to generating neutralizing antibodies, elicit long-lived and multi-functional T cells against SARS-CoV-2."

About the Research Project

This work was supported by the Van Auken Private Foundation and David Henke; the Program for Breakthrough Biomedical Research, which is partly funded by the Sandler Foundation; philanthropic funds donated to the Gladstone Institutes by The Roddenberry Foundation and individual donors devoted to COVID-19 research; and the NIH DRC Center Grant374P30 DK063720 and the S10 1S10OD018040-01 for use of the CyTOF instrument.

To ensure our work does the greatest good, Gladstone Institutes focuses on conditions with profound medical, economic, and social impact—unsolved diseases. Gladstone is an independent, nonprofit life science research organization that uses visionary science and technology to overcome disease. It has an academic affiliation with UC San Francisco. 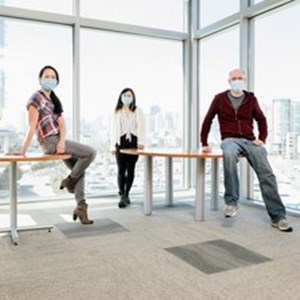