DETROIT, Aug. 25, 2020 /PRNewswire/ -- Researchers at the Barbara Ann Karmanos Cancer Institute have secured a one-year, $630,000 grant from the National Cancer Institute (NCI) that will help support the institute's clinical trials targeting underserved populations in Detroit and in the rural areas that Karmanos serves.

The CATCH-UP grant is associated with the NCI's Experimental Therapeutics Clinical Trials Network (ETCTN). In line with ETCTN's goal, the grant provides enhanced access to targeted cancer therapy for minority and underserved populations by opening NCI ETCTN-sponsored early phase clinical trials with emphasis on those populations.

CATCH-UP grant requirements include accruing a minimum of 24 patients to active NCI ETCTN trials annually with approximately 50 percent of patients identifying as members of racial/ethnic and/or rural populations. Other requirements include designating an outreach coordinator to specifically identify eligible patients among minority and underserved patients for participation in the trials, as well as supporting education and outreach efforts.

In 2019, Karmanos' interventional treatment clinical trials included a 25 percent accrual of minority patients with more than 1,300 on these clinical trials. Of the more than 600 patients on treatment trials, almost 22 percent were minorities. As part of the larger McLaren Health Care Network, there were 641 patients involved in clinical trials in 2019, as compared to 94 in 2014, the year Karmanos joined the McLaren network and expanded its clinical care base. Many of those patients live in rural areas of the state.

"While Karmanos has extensive research experience in Phase I and Phase II trials, our proposal for the grant seeks to expand these offerings for our patients, particularly those who have been underserved," said Anthony Shields, M.D., Ph.D., lead cancer center investigator on the CATCH-UP grant. "To improve our accrual onto these trials, our investigators plan many efforts including expanding the number of ETCTN trials available for our patients; adding sites in Flint, Lansing and Bay City to help recruit additional patients, particularly rural people; expanding the use of telehealth visits; and using the Research and Advocacy Consortium of the Office of Cancer Health Equity and Community Engagement at Karmanos to help select trials and recruit patients."

In the grant proposal, researchers note that part of Karmanos' catchment area includes the city of Detroit, a resource-challenged area. About 79 percent of the approximately 672,000 Detroit residents identify as African American, a group that disproportionately carries the area's cancer burden.

They also note that southeast Michigan is home to approximately 400,000 Arab Americans. Presently, there is no nationally-coordinated cancer-related surveillance of this group. In regards to members of the rural population, there are about 750,000 in Karmanos' service area.

Karmanos will use the CATCH-UP grant to support many ETCTN trials that are already open or in the process of opening. Researchers have identified four clinical trials that are already open or in process and have 15 new trials that will be covered by the grant. These trials include Phase I and Phase II trials and involve myriad cancers from gastrointestinal, gynecological, breast, lymphoma, solid tumors, lung and genitourinary.

"Receiving this CATCH-UP grant will do much to increase our recruitment to these important clinical trials and provide new treatment options for our patients," Dr. Shields said. "Residents of Detroit and rural communities bear a disproportionate cancer burden compared to the general population of Michigan and the United States. Karmanos is dedicated to serving those in minority and rural populations at our 16 treatment facilities. The more of these populations we can recruit to clinical trials, the more momentum we'll see in the therapeutic developments that effectively treat cancer among minority populations and those living in rural areas."

About the Barbara Ann Karmanos Cancer Institute
Karmanos Cancer Institute is headquartered in Detroit, with 16 locations throughout Michigan. As part of McLaren, Karmanos is the largest cancer care and research network in the state. It is among the nation's best cancer centers as one of the National Cancer Institute-designated comprehensive cancer centers in the United States and the only one located in metro Detroit. Karmanos cancer experts focus solely on cancer to prevent, detect and treat as well as eradicate all forms of cancer. Its long-term partnership with the Wayne State University School of Medicine enhances the collaboration of critical research and academics related to cancer care. For more information, call 1-800-KARMANOS (800-527-6266) or visit www.karmanos.org. Follow Karmanos on Facebook, Twitter and YouTube. 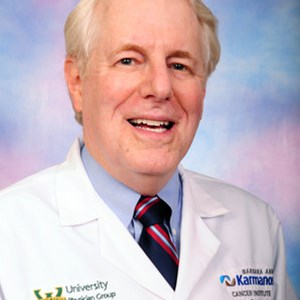