Leber's Hereditary Optic Neuropathy (LHON) is a maternally inherited mitochondrial disease, characterized by acute or subacute, painless vision loss or even loss simultaneously or sequentially, accompanied by central visual field defect and color vision impairment with poor prognosis. It was first reported by German scholar Leber in 1871. It affects about 1-9:100,000 people worldwide. LHON is one of the blinding diseases. The disease mainly occurs in young- and middle-aged men. Currently, there is no effective treatment for LHON. About 70% - 90% of LHON is caused by ND4 mutation of harboring a point mutation at nucleotide 11778 associated with a G-to-A transition. With the development of NR082, AAV-based gene therapy of LHON becomes possible.

"Due to the lack of effective treatment, the quality of life of LHON patients associated with ND4 mutation is very poor, and a huge unmet medical needs have not been fulfilled," said Dr. Alvin Luk, Chief Executive Officer at Neurophth. "NR082 is the first candidate drug developed by Neurophth. It uses recombinant adeno-associated virus serotype 2 to deliver the genetically modified ND4 gene (rAAV2-ND4). After a single intravitreal injection, the gene is translated and expressed in cells, which effectively supplements the function loss caused by endogenous mutation. Through this gene therapy, the electron transport function of mitochondrial respiratory chain was maintained, and the increase of ATP synthesis restored the normal function of mitochondria, which in turn improved the sensory function of the retinal ganglion cells and improved the visual acuity of LHON patients."

Luk added, "the significance of orphan drug designation is that regulators recognize the unmet medical needs of rare diseases like LHON. The recognition of NR082 will reduce the R&D investment to a certain extent and accelerate the progress of clinical trials and marketing registration. Furthermore, Neurophth is committed to fundamentally solve the causes and change the quality of life of patients through a single treatment of gene therapy."

*FDA grants orphan drug designation to drugs and biological products designed to safely and effectively treat, diagnose, or prevent rare diseases or conditions affecting less than 200,000 people in the US. According to the Orphan Drug Act of FDA, Orphan Drug Designation (ODD) provides opportunities for grant funding, fast approval channel, and some incentives, such as waiver of New Drug Application (NDA) fees, tax credits for clinical trial expenses and exemption for prescription drug users' fees as well as the products are entitled to a seven-year of market exclusivity and will not be affected by patents.

LHON disease is caused by mutations in mitochondrial DNA 11778, 14484 or 3460. ND4 gene of 11778 G>A mutation is the main pathological factor, which exists in 55-70% of European and American patients and 90% of Chinese patients. NR082 (NFS-01 project) is an innovative candidate drug for ophthalmic AAV-based gene therapy. It uses AAV2 vector to express human ND4 gene in the retinal ganglion cells to repair optic neuropathy caused by 11778 G>A mutation.

As early as 2011, Professor Bin Li's team started the world's first LHON gene therapy investigator-initiated trial (IIT) with this candidate drug. Nine subjects who participated in the clinical trial have been followed up for up to 8 years with no serious adverse reactions, and 5 of them have significant improvement in their vision. This result is the longest follow-up record of gene therapy in the world, which has already been published in the Scientific Report, EBioMedicine and Ophthalmology journals, and has fully proven the long-term safety, effectiveness, and durability of AAV gene therapy in clinical settings.

After the gratifying results of the first study, Professor Li's team conducted a more comprehensive IIT clinical study from 2017 to 2018, with 159 subjects (including 10 subjects from Argentina), which is the largest clinical trial in the entire gene therapy in the world. Among those, 143 of the patients has completed the 12-month follow-up and 56.6% showed a significant BCVA (best-corrected visual acuity improved by at least 0.3 LogMAR) improvement. No serious adverse reaction was found. In May 2020, at the 23rd online annual meeting of the American Society for Gene and Cell Therapy (ASGCT) and the online annual meeting of the Association for Research in Vision and Ophthalmology (ARVO), Neurophth presented these two clinical research data on the treatment of LHON with NR082 (NFS-01 project of rAAV2-ND4), demonstrating the international advanced level of this research in the field of gene therapy.

Following the positive results of these two IIT trials, Neurophth is actively preparing the China/U.S. IND (Investigational New Drug) applications, and plans to carry out the registration clinical Phase 1/2/3 registration trial to evaluate the safety, efficacy and durability of NR082.

As a clinical-stage R & D company, Neurophth is committed to exploring and developing new therapies for global patients with ophthalmic diseases. With the help of the mature AAV ophthalmic gene therapy technology platform and the deep understanding of the ophthalmology field by the founding team for decades, Neurophth has established a rich, robust product pipeline, including more than 10 research projects for various ophthalmic diseases, such as dominant hereditary optic atrophy, optic nerve injury diseases, vascular retinopathy, etc., and gradually expanded from rare to common ophthalmic diseases. Additionally, the company is preparing to build a GMP commercial production platform for gene therapy drugs accordance with the international quality standards, and plans to build an ophthalmic gene therapy transformational excellence center, aiming to become a global leader in gene therapy in ophthalmology to benefit patients all over the world.

Prospect of Gene Therapy in Ophthalmology

Inherited retinal diseases (IRDs) have long been regarded as an ideal disease area for gene therapy, because most of the gene mutations leading to the disease have been identified (more than 200 gene defects are associated with the most common IRDS).  The eye is, to some extent, an immune privilege. Clinical trials have shown that gene therapy using adeno-associated virus (AAV) or lentivirus (LV) vectors in the eye does not cause systemic side effects and does not cause significant immune responses. The most common IRDs were Retinitis Pigmentosa (RP), Achromatopsia color blindness (ACHM), Leber Hereditary Optic Neuropathy (LHON), Leber Congenital Amaurosis (LCA), Stargardt disease and X-linked Retinoschisis (XLRS).

To date, only one ophthalmic AAV gene therapy product has been approved in the world, namely the first AAV2 gene therapy voretigene neparvovec-rzyl (LUXTURNA®; Spark Therapeutics) approved by FDA in December 2017 to treat IRD caused by RPE65 double allele mutation in adult or pediatric patients. The approval of LUXTURNA® has brought confidence and hope to the global ophthalmic gene therapy field. Public information disclosed that at least 20-30 kinds of gene therapy for ophthalmic diseases are in the research and development stage, and the international representative companies include Applied Genetic Technologies Corporation and Meira GTX, and new companies represented by Neurophth have also begun to enter the international stage of ophthalmic gene therapy. 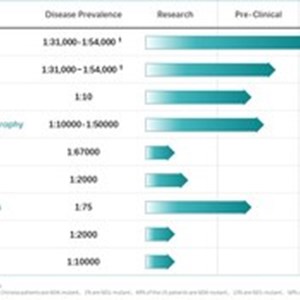