Across the world, the prevalence of chronic diseases is increasing, which is leading to the growth of the healthcare sector. The most common chronic diseases are cancer, chronic obstructive pulmonary disease (COPD), certain cardiovascular diseases (CVD), and diabetes. As per the World Health organization, 9.6 million died from cancer, alone, in 2018. With the growing incidence of such diseases, the need for effective, and preferably early, diagnosis is rising. This is increasing the demand for anatomic pathology techniques that help identify medical issues by examining tissues and fluid samples taken from the body.

Valuing $17.4 billion in 2018, the anatomic pathology market is predicted to grow to $24.3 billion in 2024, due to an increasing number of people falling prey to chronic diseases and surging number of medical tests being performed. Histopathology, surgical pathology, and cytopathology are the three primary approaches to diagnosing a disease via anatomic pathological tests. Among these, histopathological tests were the most widely performed during 2014–2018, and the same scenario is expected for 2019–2024. Such tests involve looking at a tissue sample under a microscope, for the identification of myocardial infarction (heart attack), cancer, and other tissue-related diseases.

Such diseases are more prevalent in the elderly, compared to people in the younger age groups. The United Nations reports that by 2050, the geriatric population will increase three times, from 2017. At this rate, the number of such people is predicted to touch 425 million by 2050. Thus, the increasing geriatric population, at risk to life-threatening diseases, would lead to increased medical testing, thereby driving the sale of instruments and consumables used in anatomic pathological testing across the world.

Along with medical testing, the usage of biobanking is also growing. The term refers to the process of storing samples of body fluids and tissues for research, related to disease prognosis and drug discovery. With digitization and growing requirement for instant test and research results, findings of the tests are being stored in a database for future reference. Yet another trend in the industry is the increasing usage of liquid biopsy to perform next-generation sequencing for the diagnosis of cancer. In such a test, the cancer cells or deoxyribonucleic acid (DNA) are isolated from the blood and then analyzed.

Across the world, the anatomic pathology market growth in China would be the fastest, primarily due to the rise in the geriatric population. Across Asia-Pacific (APAC), anatomic pathological tests would rise in number because of investments in diagnostic research by government and non-government organizations, popularity of personalized medicine, and growing patient pool with chronic ailments. Further, several European and North American firms, supplying test instruments and consumables, are increasing their presence in the region.

Therefore, with the growing focus on early and effective disease diagnosis and rising number of chronic disease patients, the anatomic pathology niche is predicted to keep prospering. 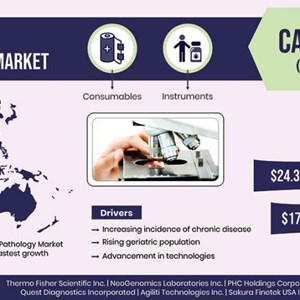