New Research Programme Points The Way To a World Without Leprosy

Basel, Switzerland – New results from the largest ever research program on combining contact tracing with prophylactic treatment indicate this approach could massively reduce the global burden of leprosy. The Leprosy Post-Exposure Prophylaxis (LPEP) program traced 170,000 people who had been in contact with individuals newly diagnosed with leprosy, and treated 150,000 of them with a single dose of rifampicin to prevent disease.1 Use of post-exposure prophylaxis is expected to interrupt transmission of the bacteria causing leprosy, meaning that if this approach is scaled up globally near-elimination of the disease could become a reality in a single generation.

The results of the five-year LPEP program, published in The Lancet Global Health, evaluated the feasibility and efficiency of systematic contact tracing, screening and administration of prophylactic treatment to eligible contacts of individuals newly diagnosed, such as household members, neighbors, or co-workers. The international multicenter study, initiated  by the Novartis Foundation with the leprosy control programs of Brazil, India, Indonesia, Myanmar, Nepal, Sri Lanka, and Tanzania, is by far the most comprehensive attempt to evaluate this approach to a disease which still sees over 200,000 people newly diagnosed every year.

Dr. Ann Aerts, Head of the Novartis Foundation, commented: “These results mean we can finally imagine a world without leprosy. By using contact-tracing and prophylactic treatment in combination with widespread availability of multi-drug therapy and other tools, we can cover the last mile in the elimination of this disease. We would like to thank the governments, NGOs and investigators who worked with us to make this landmark initiative a reality, enabling post-exposure prophylaxis to be translated into global health policy.”

Use of post-exposure prophylaxis has already been shown to reduce the risk of leprosy in contacts of leprosy patients by nearly 60%.2 As a result, the World Health Organization (WHO) recommended the intervention in their 2018 Guidelines for the Diagnosis, Treatment and Prevention of Leprosy.3

The LPEP program demonstrated that once contact tracing has been established, including prophylactic treatment can be achieved with minimal additional effort.

Professor Jan Hendrik Richardus of Erasmus MC, University Medical Center Rotterdam, and lead author of the paper, said: “LPEP has demonstrated that this approach to transmission reduction is safe, and feasible through national leprosy programs. Our research shows that contact-tracing and prophylactic treatment is generally well accepted by patients, their contacts, and health-care workers. The next step is to ensure that prophylactic treatment is rolled out in all settings where contact tracing and screening have been established.”

Access to medicines is only half of the challenge in eliminating leprosy: the disease often occurs in hard-to-reach communities, and diagnosis is frequently delayed because patients fear discrimination and social stigma. If left untreated, patients can develop irreversible neurological damage and associated disabilities, the major cause of stigma, and the infection can continue to spread. That is why interrupting disease transmission is so critical.

Jan van Berkel, President of the International Federation of Anti-Leprosy Associations (ILEP) commented on how post-exposure prophylaxis could help patients manage the impact of the disease. “With this new approach, there is a much lower chance people with leprosy can pass on disease to neighbors and friends, preventing avoidable disability and stigma, in turn helping us to progress towards zero leprosy. We need to see this prophylactic approach applied everywhere.”

For over 30 years, Novartis and the Novartis Foundation have been working with partners around the world on innovative approaches to leprosy elimination. Since 2000, Novartis has donated its multidrug therapy for leprosy free of charge through the World Health Organization, reaching over seven million patients and contributing to a 95% reduction in the global leprosy burden.4 Leprosy is now part of the Novartis Global Health unit, which brings together the company’s flagship global health priorities. It drives end-to-end strategies for the elimination or control of four diseases where there has been little investment in R&D: malaria, leprosy, sickle cell disease and Chagas disease.

“Leprosy is one of Novartis’ four flagship programs fighting diseases in poor countries, where we aim to work with partners in making a transformative impact,” said Rosanne Rotondo, Head of Global Health Flagship Programs at Novartis. “Scaling up LPEP globally will have challenges, particularly as additional resources will be required. But we have to think how much the world will save - both financially and in terms of avoidable disability, stigma and discrimination - by ending the tragedy of leprosy.”

Leprosy (also known as Hansen’s disease) has afflicted people since biblical times, and as recently as thirty years ago, millions of people were still suffering the long-term consequences of the disease. It is an infection caused by slow-growing bacteria called Mycobacterium leprae, which attacks the nerves, skin, eyes, and lining of the nose (nasal mucosa). People with leprosy who are diagnosed early and treated can continue to work and lead a normal life, and modern multidrug treatment of the disease has very high cure rates. However, stigma and discrimination can remain high long after a person has been cured of the disease – an assessment undertaken by ILEP in August 2019 revealed 139 laws and regulations in 24 countries restricting what recovered patients could do.

Figures released by the World Health Organization (WHO) show that the global burden of leprosy has been reduced by 95% since the 1980s.4 This is due in large part to the WHO’s distribution of multidrug therapy which has reached over 16 million patients since 1981. However, early successes in eliminating leprosy have actually obstructed the goal of achieving zero transmission – with fewer patients infected, funding and political commitment as well as awareness of the disease have declined.

Expert consensus suggests that in addition to the cornerstone of early diagnosis and prompt treatment with multidrug therapy for all leprosy patients, a successful elimination strategy also requires tracing and prophylactic treatment for contacts, improvements in diagnostic tools, and strict epidemiological surveillance and response systems to monitor progress.

About the LPEP study partners

Novartis is reimagining medicine to improve and extend people’s lives. As a leading global medicines company, we use innovative science and digital technologies to create transformative treatments in areas of great medical need. In our quest to find new medicines, we consistently rank among the world’s top companies investing in research and development. Novartis products reach nearly 800 million people globally and we are finding innovative ways to expand access to our latest treatments. About 110,000 people of more than 140 nationalities work at Novartis around the world. Find out more at

For questions about the site or required registration, please contact media.relations@novartis.com 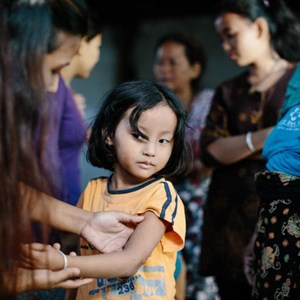