In three recent studies, the use of Prolacta's fortifiers as part of an exclusive human milk diet (EHMD)1 led to statistically significant decreases (weighted average of 9.7%) in the serious lung disease bronchopulmonary dysplasia (BPD) among premature infants compared to those fed cow milk-based fortifiers.2, 3, 4 A fourth study demonstrated that time is of the essence. Premature infants who received Prolacta's fortifiers in the first days of life as part of an EHMD experienced a 15% reduction in the incidence of BPD, compared to later administration of the 100% human milk-based fortifiers.5

"Four different studies showed that a NICU feeding protocol that includes Prolacta's fortifiers helped reduce the incidence of BPD and associated healthcare costs," said Melinda Elliott, M.D., FAAP, and chief medical officer of Prolacta. "Reducing BPD in premature infant populations has significant long-term benefits and lifelong impacts on a child's lung health and neurological development, which positively impacts not only the infants, but their families, communities, and the health system as a whole."

BPD Increases Hospital Stays and Health Care Costs
An infant's lungs are among the last organs to fully develop inside the womb. BPD is a serious lung condition mostly affecting low birth weight and premature infants. The longer a premature infant receives supplemental oxygen or mechanical ventilation, the higher the risk of developing BPD.6 During the first year of life, premature infants diagnosed with BPD have longer hospital stays and higher rehospitalization rates when compared to premature infants without BPD; this translates to a 54% increase in median hospitalization costs.7

A BPD diagnosis among preterm infants is also associated with an increased risk of developing lung problems throughout life, such as childhood asthma and chronic obstructive pulmonary disease (COPD) in adulthood.7,8 Premature infants with severe BPD may be at an increased risk for long-term neurodevelopmental delays in cognition9,10 and education,11,12 as well as attention deficit disorder.13 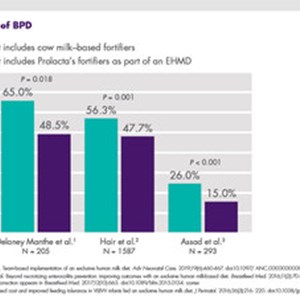