Premature infants can face many life-threatening complications. Among the most prominent of these risks is late-onset sepsis, a dangerous systemic response to infection and a leading cause of mortality in neonatal intensive care units (NICUs). It is estimated that premature infants have up to a 26% chance of developing this serious complication.1 In addition to predisposing infants to other morbidities, and subsequent neurodevelopmental disabilities, sepsis significantly increases NICU costs.2

"We developed our human milk-based fortifiers to provide the precise nutrition that vulnerable infants need to have the best possible start in life," said Melinda Elliott, M.D., FAAP, and chief medical officer of Prolacta. "We are encouraged by the reduction in late-onset sepsis incidence and evaluations observed with the use of Prolacta's products as part of an EHMD. Less sepsis means less suffering for infants as well as resource savings for already budget-strapped NICUs."

Minimizing the incidence of sepsis may include limiting premature infants' exposure to interventions that have been shown to increase sepsis risk, such as central venous lines, extended parenteral feeding, and using cow milk-based fortifiers. Clinical evidence demonstrates that one way hospitals achieved this is with Prolacta's 100% human milk-based fortifiers.

About Prolacta Bioscience
Prolacta Bioscience Inc. is a privately held life sciences company dedicated to Advancing the Science of Human Milk®. Prolacta is the world's leading hospital provider of 100% human milk-based nutritional products. These life-saving products have reduced complications and improved the health of more than 63,000 extremely premature infants globally.6 In addition, the company is exploring the therapeutic potential of human milk across a wide spectrum of human diseases, including applications for infants requiring surgery for congenital cardiac and gastrointestinal disorders. Operating the world's first pharmaceutical-grade human milk processing facilities, Prolacta leads the industry with the highest quality and safety standards for the screening and testing of donor milk. Prolacta is a global company with headquarters in Duarte, California, and can be found online at www.prolacta.com, on Twitter @prolacta, on Instagram @prolacta_bioscience, on Facebook at www.facebook.com/prolacta and LinkedIn at www.linkedin.com/company/prolacta-bioscience/. 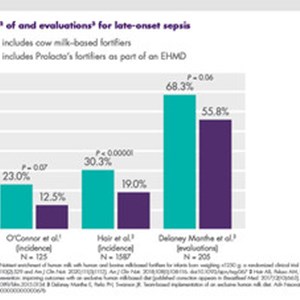