University of Birmingham researchers are working to isolate and extract the COVID-19 encounter complex in a form that is stable enough for identification of target sites for future anti-viral drugs.

The encounter complex is formed when the COVID-19 spike latches onto a binding site on an ACE-2 receptor, which is a complex protein embedded in cell membranes in the lungs, and cells that line the nose and airways.

Although it was first isolated last year, the methods used involved full extraction of ACE-2 receptors from cell membranes, and this removal of the membrane’s supportive structure affects the stability of the receptor, which makes it difficult to study its structure and function.

The Birmingham researchers are using polymer-based molecular ‘cookie cutters’ to isolate the complex and keep it embedded in the cell membrane, so preserving the full structure of the molecule in its original context and in a stable form.  The polymers are called Styrene Maleic Anhydrides, or SMAs, and the resulting structure is known as an SMA lipid particle, or SMALP, as it includes lipids from the cell membranes.

The technique was invented by Professor Tim Dafforn from the University’s School of Biosciences, who led researchers at the Universities of Birmingham and Oxford to extract what they believe is the first ever COVID-19 encounter complex with an intact membrane.

This initial project, which was funded by UKRI/BBSRC COVID-19 Rapid Response funding, also includes characterising the complex with a view to publishing its structure.  The researchers have also received funding from Innovate UK that will enable a wider team to determine which area of the complex will be the most effective for anti-viral drug discovery efforts.

The SMAs used in the study were provided by Netherlands-based company Orbiscope, which is a business unit of Polyscope Polymers B.V., and the world’s largest producer or SMAs for high-end applications including laminates for printed circuit boards, architectural and printed coatings, paints, performance materials used in cars, and cosmetics.

Dr Bart Verbraeken, Business Unit Manager Orbiscope, said:  “Beyond COVID-19, we believe SMAs have huge potential to unblock constrictions in the drug pipeline, by enabling studies of receptors in their native environments that will define drug targets more precisely than ever before.”

About the University of Birmingham

The University of Birmingham is ranked amongst the world’s top 100 institutions. Its work brings people from across the world to Birmingham, including researchers, teachers and more than 6,500 international students from over 150 countries.

About University of Birmingham Enterprise

About Orbiscope, a business unit of Polyscope Polymers

Orbiscope is a business unit of Polyscope Polymers B.V., which is the global leader in research, product development, production, and supply of styrene maleic anhydride (SMA) copolymers, compounds, and aqueous solutions. The company offers a broad range of SMA  and compounds for engineering plastic and specialty chemical applications under the trade names XIRAN®, XILOY™, XICARE™ and SMALP. Resins can be created with a very broad range of molar mass and levels of maleic anhydride content.  A global customer base is supported from corporate headquarters by both production and research & development conducted from Geleen, The Netherlands, and with local compounding, contract manufacturing facilities, and sales and marketing support in Europe, North America, and Asia.  Professor Dafforn works as a consultant to Orbiscope. 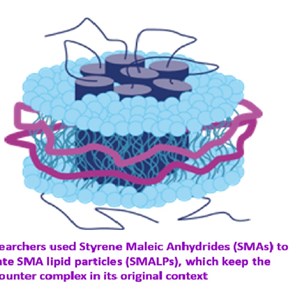