The ultrasound market is projected to reach USD 8.2 billion by 2025 from USD 6.1 billion in 2020, at a CAGR of 6.1% during the forecast period. The growth of this market is mainly driven by the increasing prevalence of target diseases, which have supported the demand for effective diagnostic procedures. Furthermore, the preference for minimally invasive procedures has risen due to their benefits over traditional surgeries. The availability of funds for research and product commercialization has allowed for technological advancements in ultrasound systems. Lastly, the potential end-user base has expanded—increasing numbers of diagnostic centers are being set up across the world to cater to the needs of a growing patient population.

Based on technology, the ultrasound market is segmented into diagnostic and therapeutic ultrasound. The diagnostic ultrasound segment is further categorized into 2D, 3D & 4D, and Doppler ultrasound. These technologies are used for the visualization and diagnosis of various medical conditions (such as gynecological disorders and neurological conditions), fetal imaging, and the imaging of organs. The growth of this market is driven by the rising preference for 3D/4D ultrasound across developed markets and their technological benefits as compared to 2D ultrasound.

Europe is expected to dominate the global ultrasound market in 2019

In 2019, Europe is expected to account for the largest share of the global ultrasound market. This can be attributed to the large number of ongoing clinical research projects in the field of ultrasound, expansions in the clinical applications of focused ultrasound (and the early commercialization of these devices in Europe), and the significant healthcare expenditure across mature European countries (such as Germany, France, the UK, Italy, and Spain).

The analysis of market developments between 2017 and 2020 has revealed that several growth strategies, such as product launches, product approvals, acquisitions, partnerships, and agreements were adopted by market players to strengthen their product portfolios and maintain a competitive position in the ultrasound market. Product approvals and launches were the most widely adopted growth strategies by market players in the last three years to garner a larger share of the market. In 2019, the ultrasound market was dominated by GE Healthcare (US), Koninklijke Philips N.V. (Netherlands), Canon Medical Systems Corporation (Japan), Hitachi, Ltd. (Japan), and Siemens Healthineers AG (Germany).

Philips (Netherlands): Philips focuses on developing and introducing technologically advanced products in the market to sustain its leading position and to further increase its share in the ultrasound market. The company has launched various novel ultrasound products in the market, such as the EPIQ Elite ultrasound system, as well as an integrated breast ultrasound solution for breast assessment. Also, the recent approvals from the US FDA for its EPIQ series, Affiniti series, Lumify, and CX50 and Sparq diagnostic ultrasound systems to be used for COVID-19 assessment will further boost the company’s share in the market. 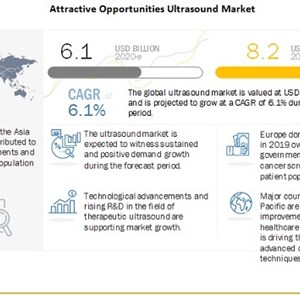