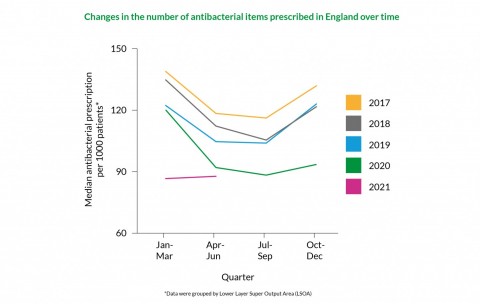 York, UK, 8th December 2021 / Sciad Newswire / Over-prescribing of antibiotics is a major contributor to increasing levels of antibiotic resistant infections. Antibiotic prescription rates rise every winter, but new data from the charity Antibiotic Research UK (ANTRUK) and Costello Medical shows how the annual rise in winter prescribing can be reduced. To sustain this reduction in prescribing, ANTRUK is launching its ‘What’s Bugging You This Winter?’ campaign, calling on everyone to understand the role that they can play in tackling antibiotic resistance.

The new data demonstrates that the usual increase in GP antibiotic prescribing of over 20% from summer to winter was reduced to an increase of just 4% during the pandemic winter of 2020-21, illustrating the scale of over-prescribing that usually occurs in winter.

What’s bugging you this winter?

The new campaign launched today aims to inspire everyone to play their part in reducing unnecessary antibiotic prescribing:

Seasonal increases in illnesses such as colds and flu have typically been met by a significant rise in antibiotic prescription rates. However, antibiotics don’t treat viral infections which are often the cause of these illnesses.

Professor Colin Garner, Chief Executive of ANTRUK, commented: “This new data shows that it is possible to avoid the usual winter increase in antibiotic prescribing. Although typical cough symptoms can take up to three weeks to resolve, we also know that antibiotics for most respiratory tract infections (your typical cough, sore throat, earache) do not speed up recovery times. Instead, they often give patients many side-effects, and promote the development of antibiotic resistant bacteria.”

Find out more about the new campaign and how you can help to reduce unnecessary prescriptions.

Overall, antibiotic prescriptions from GPs in England fell by 17% during the first year of the pandemic compared to the previous year.

The world’s first charity and only charity focused on tackling bacterial antibiotic resistance. The charity’s mission is to develop new antibiotic treatments, educate the public about resistance and provide patient support. Since its formation in 2014, the charity has funded research, supported academic groups in universities and employed the country’s first Patient Support Team focussed on supporting patients with an antibiotic resistant infection. The charity relies wholly on public donations and receives no government support.

You can learn more about Antibiotic Research UK at www.antibioticresearch.org.uk

Antibiotic resistance is where the bacteria that cause infections become resistant to antibiotics. It is a rapidly emerging crisis that threatens to become the next pandemic with deaths predicted to reach 10 million a year by 2050. This will cause a global catastrophe that threatens the lives of all of us if we don’t act now.