Immutep CSO and CMO, Dr Frederic Triebel, noted: “It is very encouraging to see efti, in combination with pembrolizumab, showing an encouraging early overall survival rate of 73 percent at the six-month landmark, and promising interim disease control and tumour growth kinetics. The early signs are supportive that efti may boost the patient’s immune system to enable pembrolizumab to work more effectively in these patients with advanced lung cancer, while being safe and well tolerated.”

TACTI-002 Principal Investigator, Dr Matthew G. Krebs of The University of Manchester and The Christie NHS Foundation Trust, said: “These interim results show an encouraging disease control rate of 36.1 percent, with 26 percent of patients being progression-free at the 6-month landmark. These patients are a challenging population to treat, having progressed after previous lines of immunotherapy or chemo-immunotherapy and have limited options available for further treatment. So, it is pleasing to see the potential of efti in combination with pembrolizumab to provide meaningful benefit in this patient group.”

Condition of the patients as they entered the trial

A total of 36 patients were enrolled and treated. Patients were advanced in their disease. They had progressed after prior standard of care treatment with either anti-PD-(L)1 mono therapy (28 percent) or a combination of chemotherapy and anti-PD-(L)1 therapy (72 percent) and are referred to as PD-X refractory. Disease progression was confirmed by two consecutive CT-scans at least four weeks apart, eliminating the possibility of pseudo-progressions.[1] The majority of patients (69 percent) had a PD-L1 tumour proportion score (TPS) of less than 50 percent at baseline, making them generally less likely to respond to anti-PD-(L)1 therapy. 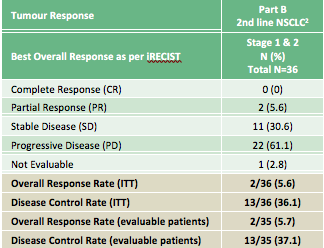 The combination of efti plus pembrolizumab is safe and well-tolerated, continuing efti’s good safety profile to date and compares favourably to standard of care chemotherapy options.

The interim data from the TACTI-002 study shows that efti in combination with pembrolizumab is demonstrating encouraging early signs of antitumour activity in second line confirmed PD-X refractory, NSCLC patients.

More mature data from the 2nd line NSCLC cohort is planned to be presented later this year, along with other data from the TACTI-002 trial.

[1] A pseudo-progression refers to an increase in the apparent size of a tumour or number of metastases on an imaging test, that can falsely create the appearance of disease progression. This may be caused by the infiltration of immune cells into the tumour site or a delay in the development of an adaptive immune response following immunotherapy.

[2] As assessed by the local investigator read.