Clinicians and nurses in neonatal intensive care units (NICU) across Manchester University NHS Foundation Trust (MFT) are the world’s first to deploy genedrive’s MT-RNR1 ID Kit, a new rapid genetic point of care test (POCT) to screen babies for the genetic variant m.1555A>G when admitted with suspected sepsis. Neonates with bacterial infections such as sepsis are routinely prescribed gentamicin, an aminoglycoside antibiotic, however, for babies with an inherited m.1555A>G genetic variant, a single dose of this antibiotic can result in permanent hearing loss.

New clinical trial results demonstrate that genedrive’s test can detect the presence of the genetic variant in less than half an hour, compared to traditional lab-based testing, which can take days or weeks to deliver results. This historical slow turn- around time meant that this vital patient safety issue could not be determined in an emergency care setting. The rapid result enables clinicians to prescribe alternative antibiotic treatments to neonates carrying the variant, enabling patients to begin life-saving treatments as soon as possible without risk of hearing loss.

The rollout follows the results of a successful performance trial of the technology in the NICU at Saint Mary’s Hospital in Manchester, part of MFT. Using genedrive’s test, the Pharmacogenetics to Avoid the Loss of Hearing (PALOH) study – which was part-funded by NIHR Manchester Biomedical Research Centre (BRC) – screened 751 neonates admitted to the NICU for the MT-RNR1 genetic variant known as m.1555A>G, which can provide results to clinicians in 26 minutes. This information was used to guide prescribing decisions, with babies at risk of antibiotic-induced hearing loss prescribed an alternative antibiotic.

Prior to using the genedrive test, clinicians had no way of knowing if their newborn had the m.1555A>G variant before prescribing life-saving antibiotics, as existing genotyping technology involves time-consuming lab testing. In cases of early-onset neonatal infection, National Institute for Health and Care Excellence (NICE) guidelines state that antibiotic therapy should be started within one hour of the decision to treat with antibiotics, and any delays could be lethal. As such, clinicians have until now been forced to make prescribing decisions without this  genetic information. Genedrive’s test and instrument has enabled this, providing clinicians with genetic information in a clinically relevant timeframe. This has the potential to spare over 14,000 neonates from permanent hearing loss around the world every year.

In non-acute clinical cases, guidance from the Clinical Pharmacogenetics Implementation Consortium (CPIC) and from the UK Medicines and Healthcare Regulatory Agency (MHRA) already recommends that genetic testing is carried out and that individuals with the m.1555A>G variant do not receive aminoglycoside antibiotics, unless the risk of permanent hearing loss is outweighed by the severity of the infection. With genedrive’s technology, this informed decision making is now also available to clinicians working in acute NICU settings.

“We’ve known about the link between m.1555A>G and profound hearing loss for some time, but there has been no way of doing a genetic test at a patient’s bedside in less than an hour. Time is of the essence for clinicians treating neonates presenting with sepsis – they do not have the luxury of waiting days or weeks for the results of a genetic test. We’d seen the valuable work genedrive was doing testing for other genetic variants, and we were keen to explore how its technology could help our NICU nurses and consultants,” said Professor Bill Newman, Consultant in Genomic Medicine at MFT.

Professor Newman, who is also Genomic Solutions Associate Lead for Manchester BRC’s Hearing Health theme, added; “During the trial, genedrive’s rapid point of care test provided our clinicians with vital information when they needed it. They no longer had to make prescribing decisions in the dark, and they no longer had the conundrum of knowing that some of their patients could develop profound hearing loss after treatment with routine antibiotics. Crucially, genedrive delivers results in less than 30 minutes, which means treatment can begin within the hour – this is critical in these cases.”

MFT is now rolling out the genedrive antibiotic induced hearing loss test across three of its NICUs to start, with more rollouts planned. The first sites in the trust to implement the technology include Saint Mary’s Hospital and Wythenshawe Hospital. The genedrive MT- RNR1 assay (test) uses cells collected from a swab from the inside of the patient’s cheek. In pre-clinical validation, the genedrive platform demonstrated an assay sensitivity of 100% and a specificity of 100%. During the PALOH trial, the platform demonstrated real-world analytical sensitivity of 100%, a specificity of 99.2%, and an accuracy of 99.2%.

“The PALOH Study was the first time that molecular diagnostics had been used in a neonatal urgent care setting. With genedrive’s technology, clinicians have potentially life-changing genetic information at their fingertips. Knowing whether a patient has the m.1555A>G genetic change is vital for making informed prescribing decisions but, in urgent situations, doctors can’t wait for lab results. We’re excited about the rollout of our technology across Manchester and the UK, and the potential this has to save thousands of babies from hearing loss every year,” said David Budd, CEO of genedrive. 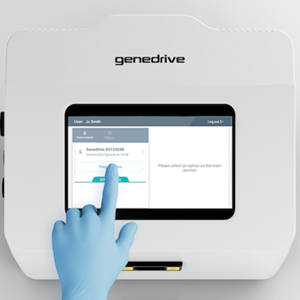