Immutep presents new and significant data from the AIPAC study

Immutep presents new and significant data from the AIPAC study

Sydney Australia, May 4, 2022 – Immutep Limited (ASX: IMM; NASDAQ: IMMP) ("Immutep” or “the Company”), a biotechnology company developing novel LAG-3-related immunotherapy treatments for cancer and autoimmune disease, today reports new biomarker and exploratory analysis data from its Phase IIb AIPAC trial. The data was presented at ESMO’s Breast Cancer Congress in a poster presentation which is available on ESMO’s website and at https://www.immutep.com/investors-media/presentations.html.

Dr Frederic Triebel, Immutep’s CSO and CMO said: “The biomarker analysis is highly valuable for two key reasons. Firstly, the statistically significant difference in the immune response between the efti and placebo patients confirms efti is activating the immune system and helping patients live longer. This is demonstrated by the increase in circulating monocytes, CD8 T cells and a serum Th1 marker, CXCL10, plus the absolute lymphocyte count (ALC), and correlation of these improved immune parameters with overall survival. Secondly, the early rise in ALC in patients treated with efti provides clinicians with a potential predictor of improved survival, helping them to determine early on if continued treatment with efti is potentially beneficial.”

“The exploratory analysis showing statistically significant improvements in OS in different patient subgroups is also very important as we work towards the optimal design of the planned registrational trial in breast cancer. This all continues to be consistent with our long-held belief that efti, with its unique mechanism of action, should be able to help diverse sets of patients, including those who fail to respond to current immunotherapy options,” he concluded.

Biomarker analysis showed efti, in combination with weekly paclitaxel, significantly increased the number of circulating immune cells (monocytes, activated CD8 T cells) and CXCL10 serum levels, compared to baseline. The increase was not observed in the placebo group (see Table 1). An increase in activated CD4 cells was also observed. The increase in these pharmacodynamic markers (monocytes, CD8 T cells and CXCL10) was significantly linked to improved OS in the efti group, but not in the placebo group. These findings of an improved immune status are also relevant for the anti-PD-1 combinations with efti.

Notably, in the biomarker study, patient blood samples were drawn 13 days after efti injection. This was to ensure that the study would show the minimum residual pharmacodynamic effect from therapy with efti and paclitaxel, since efti disappears from the blood in only 3-4 days.

Thus, since efti is administered every 14 days, we conclude that that the observed increase in the number of circulating immune cells was sustained throughout the course of treatment (or even greater at the peak of the immune response).

The absolute lymphocyte count (ALC) was shown to increase early and sustainably in patient’s treatment regimen in the efti group, but not the placebo group. The increase in ALC was also significantly linked to improved OS. ALC can be measured easily in every hospital laboratory, making it a practical potential predictive biomarker for efti efficacy and therefore improved survival. 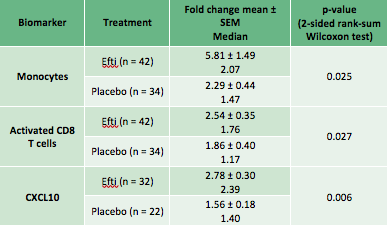 Through exploratory analyses, six subgroups of patients showed an improvement in OS in the efti group, compared to placebo (see Table 2). Five of the six subgroups (less than 65 years, low baseline monocytes, high neutrophil to lymphocyte ratio (NLR), less than 5 years since diagnosis and luminal B) showed a statistically significant improvement in OS and in the ‘no prior taxane therapy subgroup’ a statistically significant increase was also seen in ORR.

The subgroups will be considered for patient population selection for future studies, such as Immutep’s planned Phase III AIPAC-003 trial.

Multivariate analysis showed patients entering the trial with high body mass index (BMI) and prior CDK4/6 treatment had significantly poorer PFS and OS outcomes irrespective of the therapy they received. High BMI and prior CDK4/6 treatment are therefore considered independent poor prognostic markers and will be considered as stratification factors for future studies. Multivariate analysis also showed that low monocytes and no prior taxane therapy were independent significant predictive factors for improved OS. 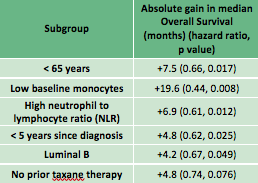