Prefilled Syringes Drug Molecules Market to close in on a valuation of US$ 77.7 Billion by 2028

[306 Pages Report] Prefilled syringes drug molecules are prefilled with medication by the manufactures and are supplied to end users in the ready-to-use form. The overall global investment in healthcare has increased in the last few years. Healthcare field solutions continue to be sought after to increase the quality of life, which provides significant opportunities for pharmaceutical companies. This has also contributed to the growth of various segments of the healthcare industry such as the prefilled syringes drug molecules market.

Global Prefilled Syringes Drug Molecules Market: Drivers and Opportunities The report indicates that revenue growth of the market is mainly driven by the effectiveness, convenience and ease of use of prefilled syringes. This has attracted various healthcare professionals and patients to use prefilled syringes. In addition, the minimal contamination of drug molecules and self-administration of drugs at home settings have increased the demand for prefilled syringes drug molecules. Manufacturers are focussing on introducing updated technologies and advanced products in order to attract customers. Pharmaceutical companies are introducing generic versions for cost-effective auto-injector devices and are targeting emerging regions such as the Asia Pacific, Middle East and others in order to sustain and grow in the global prefilled syringes drug molecules market. Request Sample @ https://www.futuremarketinsights.com/reports/sample/rep-gb-3198 Global Prefilled Syringes Drug Molecules Market: Segmental Analysis 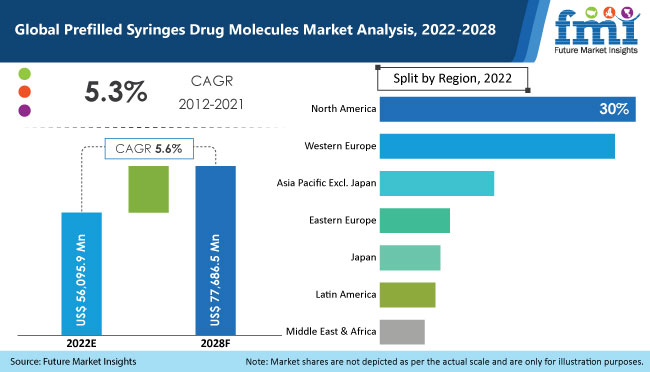 This comprehensive research report consists of a brief profile of all the major players in the industry. Some of the top companies featured in the report are Amgen Inc., Teva Pharmaceutical Industries Ltd., AstraZeneca plc, Mylan N.V., Pfizer, Inc., Fresenius Kabi AG, Johnson & Johnson, Sanofi, Merck & Co. Inc., Novartis AG etc. The global prefilled syringes drug molecules market is highly competitive due to the presence of well-established top players. However, brands such as EpiPen auto Injector and BD Physioject disposable auto injector have strategically maintained their position in the market owing to a distinctive value proposition such as providing more precision and accurate dosage.

Future Market Insights (ESOMAR certified market research organization and a member of Greater New York Chamber of Commerce) provides in-depth insights into governing factors elevating the demand in the market. It discloses opportunities that will favor the market growth in various segments on the basis of Source, Application, Sales Channel and End Use over the next 8-years.