Rising Focus on Use of Prefilled Syringes Fuelling the Demand

At present, value of the global safety needles market is estimated to be s worth US$ 3,752.2 Mn, and it is estimated to reach US$ 7,765.7 Mn by 2027-end, witnessing a CAGR of 6.9% during this forecast period. The growing focus on utilization of prefilled syringes for treatment of several ailments is fuelling the demand for safety needles across the globe. Factors such as changing lifestyle habits, exposure to hormones and infection by HCV are expected to result in gynaecological cancers. Rising incidence rate of gynaecological cancers, coupled with higher presence of lower-back problems in regions such as the US are driving the demand for spine needles and other types of safety needles.

To remain ahead of your competitors, request for a sample – https://www.futuremarketinsights.com/reports/sample/rep-gb-2029 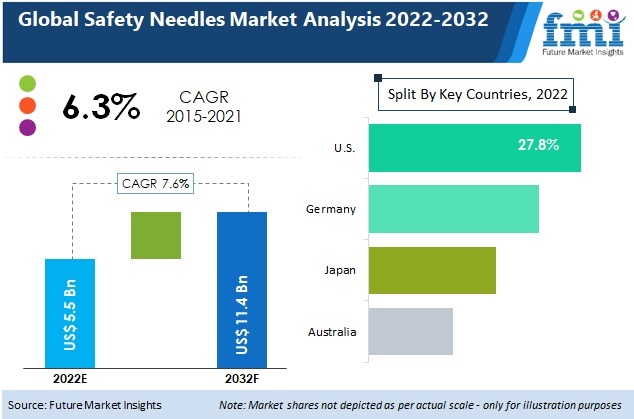 The sole purpose of designing safety needles was to avoid needlestick injuries while collecting fluids and delivering drugs to the body. The key players of global market for safety needles are enhancing their product portfolio by focusing on production of innovative needles with safety features. These players include B. Braun Melsungen AG, Novo Nordisk A/S, Medtronic, and Becton, Dickinson and Company. Becton, Dickinson and Company holds its dominance in the overall market with around 50% share, followed by Medtronic and Novo Nordisk AS. Future Market Insights’ recent report profiles Smith Medical and Argon medical Inc. as emerging safety needle manufacturers, while Terumo Medical Corporation and Boston Scientific Inc. are recognised as mid-level players in the global safety needles market.

Leading companies are participating in campaigns in co-ordination with governments of several economies for raising awareness about unsafe use of reusable needles among patients. Increasing prevalence of HIV & blood-borne diseases, owing to needle injuries, has also urged the companies for development of needles with enhanced safety features.

Key findings from FMI’s Report Include

Get a Tailored Made Report to Match Your requirements, Ask from Market Research Expert – https://www.futuremarketinsights.com/ask-question/rep-gb-2029

Future Market Insights (ESOMAR certified market research organization and a member of Greater New York Chamber of Commerce) provides in-depth insights into governing factors elevating the demand in the market. It discloses opportunities that will favor the market growth in various segments on the basis of Source, Application, Sales Channel and End Use over the next 9-years.