HATFIELD, Pa., Nov. 1, 2019 /PRNewswire/ -- Genisphere reported a publication in the journal Brain that demonstrates a novel 3DNA® nanocarrier shown to carry a peptide drug through the body and precisely target microglia cells in the brain. Using a model of premature infant brain injury, the 3DNA-based therapeutic targeted microglia and modified their cellular biology, which protected critical white matter tissue in the brain and improved animal behavior and memory.

Dr. Bobbi Fleiss, a Vice-Chancellor's Research fellow at Royal Melbourne Institute of Technology (RMIT) and Visiting Senior Research Associate at Inserm, explained, "The Wnt signaling pathway was known to be critical during embryonic development but we have shown for the first time that it controls the behavior of microglia, the brain's immune cells. We used 3DNA to deliver a Wnt agonist to keep this pathway active specifically in microglia in the injured brain. Without treatment, the microglia are overactive, eventually leading to brain damage."

Professor Pierre Gressens, Research Director at Inserm and Professor of Neonatal Neurology at King's College London, commented, "We have validated the important role for Wnt by demonstrating that we can prevent microglia from acquiring an inflammatory phenotype that damages myelin in the brain, so now we must further study how to best bring this treatment closer to the clinic. This is clinically important research considering every year, 9 million preterm babies suffer neurological impacts from neuroinflammation and we currently have no treatments to repair this injury."

Dr. Robert Getts, Genisphere's Chief Science Officer, said, "I thank all authors who contributed to this foundational publication. It is profound to see specific targeting of these specialized brain immune cells [the microglia] with systemic administration of the 3DNA-conjugate and observe positive effects in the short and long-term using low, infrequent doses. Given the role microglia play in a variety of neurodegenerative diseases, we have initiated work on new siRNA approaches at Inserm and additional brain injury paradigms at RMIT to expand these therapeutic strategies."

About Genisphere
Genisphere LLC is the provider of the 3DNA® platform for targeted drug delivery. 3DNA® is a nanoscale, multivalent scaffold made from proprietary, synthetic DNA formed in a flexible, branched structure. 3DNA® nanocarriers are engineered and cross-linked to form a stable architecture while maintaining the biocompatibility of the nucleic-acid building blocks, and demonstrate efficacy and safety with a variety of drug cargos across multiple indications. Genisphere's technology is IP-protected and fully customizable to deliver small molecules, biologics, and nucleic acids with precise specificity enabled by multivalent targeting via antibodies, peptides and other molecular entities. Genisphere leverages a collaborative model to advance its 3DNA® drug delivery platform, and seeks additional partnerships with biotechnology and pharmaceutical companies to improve efficacy and reduce toxicity. Genisphere is also advancing its own lead compounds based on 3DNA® nanotechnology. For more information, please visit Genisphere.com 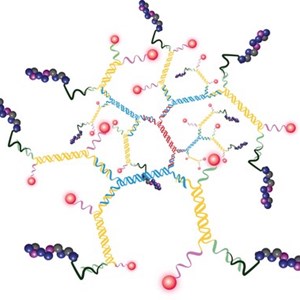